When I saw one of the excursions possible from the ship was a visit to a seahorse farm I cast my vote immediately. I told Mr. Munro we should visit and he agreed since we both love nature, animals and the like, and it was something we can’t do here in New Zealand. I fell in love with seahorses during my visit to Kelly Tarlton’s Underwater world in Auckland. Our claim to fame – I believe Kelly Tarlton’s pioneered the giant perspex tubes that you see in aquariums World wide.

1. Seahorses are generally monogamous and they can’t live alone. They must have a mate.

2. The seahorse is the only animal in the entire animal kingdom in which the MALE has a true pregnancy.

3. The MALE stays pregnant most of its life.

4. Seahorses inhabit the coral reefs and sea grass beds in all the oceans of the world.

6. Over 30 million seahorses are taken from the wild every year for use in Chinese medicine.

7. Over 1 million seahorses are taken from the wild for pets. Most die.

8. They will eat only live foods such as brine shrimp and are prone to stress in an aquarium, which lowers the efficiency of their immune systems and makes them susceptible to disease.

9. A seahorse has highly mobile eyes to watch for predators and prey without moving its body. It has a long snout with which it sucks up its prey. Its fins are small because it must move through thick water vegetation. The seahorse has a long, prehensile tail which it will curl around any support such as seaweed to prevent being swept away by currents.

10. Ocean Rider in Kona, Hawaii started up to breed seahorses so they weren’t taken from the wild for the pet fish trade.

11. As mentioned in No. 8 above seahorses eat live food in the wild. Ocean Rider’s first challenge was to get their seahorses to eat dead food. One brave little seahorse – I think his name was Jack but I can’t remember for sure – tried one and all the others copied him. They moved Jack from tank to tank to train all the other seahorses.

12. Check out Ocean Rider for details on buying and caring for seahorses and register for their bulletin board to get into contact with other owners.

13. A pair of Mustang Seahorses of medium size costs around US$300 for a pair. Mustang seahorses are good for first time seahorse owners. They are tropical, colorful, bold, gregarious, social, hearty and healthy! They all feed EZY on frozen mysis enhanced with Vibrance® right from your hand!!

Ocean Rider has been breeding the Mustang since 1998. They first offered Certifiticates of Authenticity and High Health for the Mustang in 1999. All Mustangs are now shipped with these Certificates.

And finally, here are a few photos from our visit. It was a bit hard to photograph the little blighters but we did our best! These are the tanks and that’s me with my floppy hat. 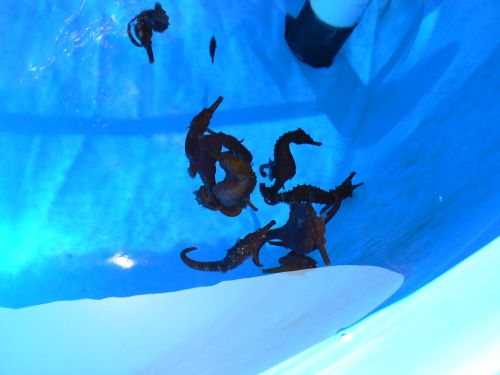 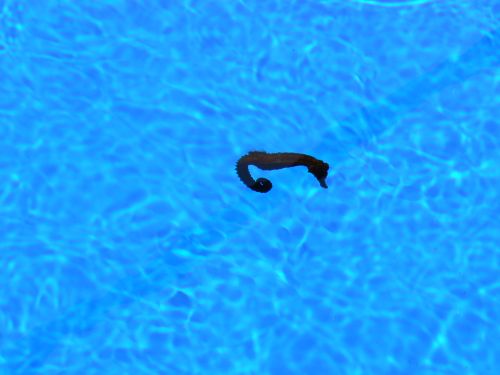 And these are my fingers holding a seahorse. They’re just so danged cute. Ah, that would be the seahorses, not my fingers :wink: 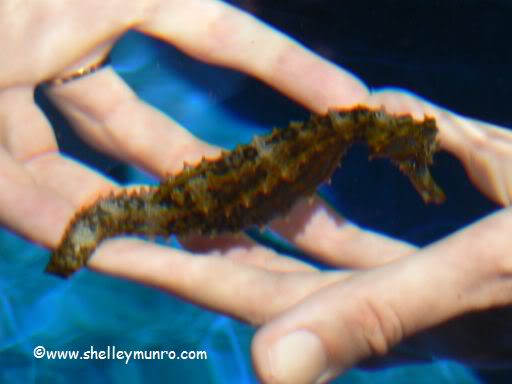 ← The Bog Man A Military Man →