Most visitors to Edinburgh, Scotland can’t resist this heart-warming tale of a loyal Skye terrier who guarded his master’s grave for fourteen years.

Bobby was the watch dog of John Gray, a police constable in Edinburgh. The pair often took walks to Greyfrairs Place, a coffee house owned by Mr. William Ramsey and were a well known sight. John “Jock” Gray developed tuberculosis and died in Feb 1858.

The funeral took place, and Bobby refused to leave the graveside. Dogs weren’t allowed in the Kirkyard, but Bobby stubbornly remained at his master’s side. Locals took pity on the loyal terrier and started to feed him. They continued looking after the tenacious terrier until he died 14 years later in 1872. 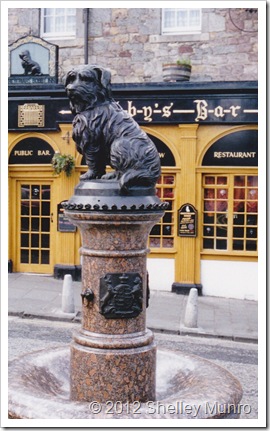 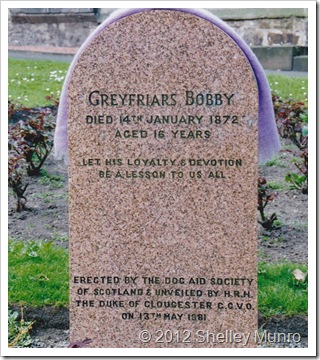 According to records, Bobby had a stumpy tail that constantly wagged and a courageous character. He didn’t like strangers, yet was devoted to family and his master. Disney made a movie about Greyfriars Bobby, which I remember watching as a child, so I was thrilled to visit his statue and headstone during our visit to Edinburgh.

Have you seen the Disney version of Greyfriars Bobby? Cartoons aside, what is your favorite Disney movie?

← Recipe: Chunky Oat Biscuits A Day in the Life of Eve Fawkner, Cat Burglar in Training →