Would a Zombie Make a Good President?

I’d like to welcome E. Van Lowe to my blog today. I took one look at the title of E’s Young Adult book—The Zombie Always Knocks Twice, saw the cover and knew I had to read this book. Doesn’t it look like fun? E is visiting today, so please give him a huge welcome as he talks about zombies and adds a hint of politics. Over to E! 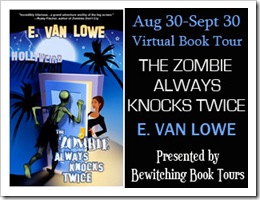 Would A Zombie Make a Good President?

It’s an election year, and as we wade through the issues to decide which candidate would make a better president, I decided to it was the perfect time to ask the burning question; would a zombie make a good president? I know it’s a silly question, but I just wrote a book with the word “zombie” in the title, so bear with me.

I think zombies have some very positive qualities for being a national leader.

1) Zombies are incredibly resourceful. Think about it. How many movies have we seen where our heroes are in a supermarket, or in the woods, supposedly far away from any munching zombies when BAM! a zombie shows up out of nowhere ruining their day. In these difficult times, America needs a resourceful leader. 1 pt for zombies.

2) Zombies are not easily distracted. You can run from them, shoot at them, even set them on fire and they will keep coming. In a world where there are so many distractions, we need a leader who can keep his eyes on the prize–literally. That sounds to me like a zombie. 1pt for zombies.

3) Zombies are incredibly driven. When they want something—or someone—they pursue it (or him or her) with single-minded purpose. Once a zombie sets a goal for himself, he goes after it and either achieves his goal or dies trying. That’s a great quality for any leader. 1 pt for zombies.

But just as zombies have all the positive presidential qualities listed above, zombies also have a few negatives.

2) Zombie’s want to eat all the time. This can be a real problem in the war room where the joint chiefs are discussing strategy to keep the free world free, and all and our zombie president wants to do is eat their brains. 1 pt against zombies.

3) Zombies are not very well spoken. Who wants to listen to a state of the union address where “Raaagh!” and “Errrgh!” are the only words coming out of our president’s mouth? A president’s eloquence should reassure a nation, not scare them to death. 1 pt against zombies.

So far for me it’s a 3-3 tie. I need you guys to break the tie. Have some fun with it. Come up with a reason or two for or against a zombie being president. And while I have you in zombie mode, I hope I can get you to check out my latest novel, The Zombie Always Knocks Twice. It’s the first book in my new Hollyweird series. If you like exciting paranormal stories with real adventure, romance and a juicy mystery at its core, I think you will enjoy it. You can find it on Amazon here: The Always Knocks Twice

Open to US Shipping 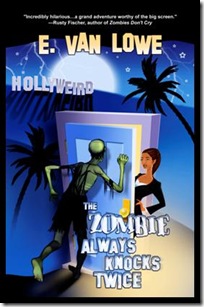 Hollywood can be a difficult place to grow up, especially if you’re Kristine Golden, a fifteen-year-old necromancer with a sworn duty to lay the risen dead back to rest and no desire to be in the movie business.

When handsome deadie Alex Romero swaggers into her life, Kris must keep her promise, despite her growing feelings for him. If that’s not enough to give a girl a headache, a murderous zombie comes knocking at Kris’ door, rocking her world and threatening her family.

Can Kris solve the mystery of the rampaging zombie before someone else winds up dead? Or will the walking dead take over Hollywood and turn it into… Hollyweird? 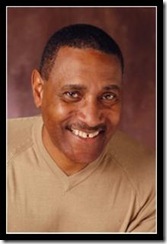 E. Van Lowe is an author, television writer, screen-writer, playwright and producer who has worked on such TV shows as "The Cosby Show," "Even Stevens," and "Homeboys In Outer Space." He has been nominated for both an Emmy and an Academy Award. His first YA Paranormal novel, "Never Slow Dance With A Zombie," was a selection of The Scholastic Book Club, and a nominee for an American Library Association Award. His Best Selling novels, “Boyfriend From Hell” and “Earth Angel,” are the first two books in the Falling Angels Saga. “The Zombie Always Knocks Twice” is the first book in his Hollyweird series.

E lives in Beverly Hills California with his spouse, a werewolf, several zombies and a fairy godmother who grants him wishes from time-to-time.

← 13 Things to do with Ghosts and Ghost Hunters Serials - An Old Idea Made New? →