Cinderella is my favorite fairy tale. I like the idea of Cindy getting ahead of her horrid stepfamily and snagging the prince to live happy ever after. Recently I’ve written a contemporary romance that’s a modern retelling of Cinderella, and I thought Cinderella facts would make a perfect topic today.

1. Charles Perrault first published the story in 1697. The Brothers Grimm later included it in their collection of tales—Grimm’s Fairy Tales (source: Wikipedia)

2. Cinderella is also known as The Little Glass Slipper.

3. When Disney released Cinderella they hadn’t had a hit since Snow White and the Seven Dwarfs. If Cinderella hadn’t been a huge hit, it’s likely that the Disney franchise would have gone bankrupt.

5. In the original Cinderella story, the glass slippers were made from fur.

6. Cinderella’s original name was Ella. One night she fell asleep while cleaning near the fireplace and her face and clothes became smudged by the cinders. After that she was known as Cinderella.

7. Lots of countries have their own version of Cinderella. China has one of the earliest ones.

8. One of the original issued taglines was “Midnight never strikes when you’re in love.” ~ source: Yahoo

9. Julie Andrews and Whitney Houston have both played the role of Cinderella.

10. Walt Disney’s favorite scene is said to be when Cinderella’s torn dress transforms to the white ball gown.

11. Cinderella is a very popular choice with romance writers when it comes to retelling tales. I’m in good company. 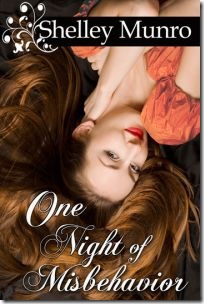 13. Here’s my “Cinderella” blurb from my upcoming release, One Night of Misbehavior

He wears his scars on the outside. She keeps hers safe inside.

Charlotte Dixon ignores her stepmother’s edict and, in an act of disobedience, attends one of the social events of the year—a masked costume ball. Charlotte’s naughtiness escalates when she dances and smooches with a sexy masked man. The night of anonymous passion that follows makes her yearn for a different life, but the next day she’s back to her dull routine of household management.

Advertising tycoon, Ash Marlborough is about to set a private investigator on the trail of his mystery princess when she waltzes right into his place of work. Charlotte is shocked to meet her masked man in the flesh, and even more perturbed when he asks her out on a date. Despite craving another night of sexy loving, she doesn’t have time for a man, not when she wants to reinvent herself and grasp a new, improved life with both hands. But Ash knows what he wants, and he’s determined to win the heart of his princess. Let the dance of seduction commence.

Warning: Contains a conniving stepmother, selfish stepsisters, a grandmother with fairy godmother tendencies and a sexy masked man who is willing to face them all for the love of a good woman.

What is your favorite fairy tale?

← The Holiday That Doesn't Live Up to Expectations Review: Storm Force by Susannah Sandlin →