13 Things to do in Auckland, New Zealand

Auckland is the largest city in New Zealand. It’s big in terms of population (32% of NZers live here) and spreads from Waiwera and Kumeu in the north to Runciman in the south. Auckland is also my home.

Here is a list of Thirteen interesting places to visit in Auckland.

1. Sky Tower – the phallic-like tower dominates the inner city skyline and can be seen for miles. This is an excellent place to get a view of the city and the braver people can bungee jump off for a quick descent. One of the restaurants at the top of the tower is a revolving one, and there are also displays about making the tower.

2. Mt. Eden – this is one of the dormant volcano cones within the city. The 360 view from the summit is gorgeous. From the top you can also look down the steep slopes of the almost perfect crater. 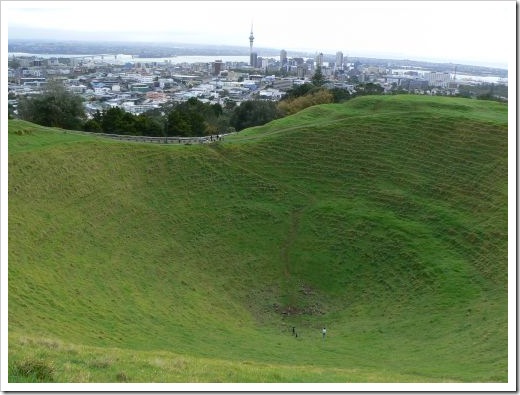 3. The Auckland Memorial Museum – the museum sits within the Auckland Domain. If you’d like to learn about New Zealand and the Maori people, this is the perfect place to start.

4. Kelly Tarlton’s Underwater World – building the aquarium was a labor of love for Kelly Tarlton. He purchased old sewage tanks and turned them into an underground aquarium. The large Perspex tubes that you can walk through to look at the fish, and are now common in aquariums worldwide, were first used and designed here. Along with fish you can also see penguins.

5. Rangitoto Island – This is the “youngest” volcano in the Auckland region and it erupted around 600 years ago. Catch a ferry over to the island to explore the lava caves and walk to the summit.

7. Devonport – a small village that’s a 10 minute ferry ride across the harbor. There is a nice beach, shops, cafes, lots of art galleries, more extinct volcanoes and walking tracks.

8. Waitakere Ranges Regional Park – Get out into the wilderness. Native trees, walking tracks and it’s not far from the central city. See some of our mighty Kauri trees here.

9. Beaches – The city straddles both the west and east coasts. In the west we have beaches with black sand and big breakers. (Tasman sea) On the east we have white sandy beaches and the Pacific Ocean.

10. Viaduct Harbor – This is a waterfront area full of restaurants and bars. You can sit with drinks and a meal and watch all the expensive boats. An excellent place to people watch. The Maritime museum is here too.

11. Coast to Coast walk – This walk is 16 kilometers long and goes from one coast to the other, crossing parks, passing volcano cones and going through the different suburbs.

12. Cornwell Park and One Tree Hill – The park donated by Sir John Logan Campbell for the use of the people of Auckland. Have afternoon tea and climb up to the obelisk at the summit of One Tree Hill. It’s also a working farm and during the spring you get to see all the lambs racing around. Very cute!

13. Go wine-tasting. There are several regions close to the city: Henderson, just north of the city, on Waiheke Island or visit the Villa Maria vineyard in Mangere. (not far from our international airport) Time it right and attend one of the many concerts that are held at the vineyard or just taste some of their wines and eat at their cafe. The cheese platters are good.

If you were to visit Auckland, what would you want to see first?