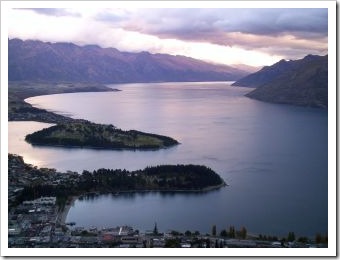 Like most countries, New Zealand has myths to explain the formation of various lakes and mountains. This is the legend of how Lake Wakatipu in Queenstown, New Zealand was formed.

Renowned beauty Manata lived in Otago in the South Island of New Zealand. She was popular with neighboring men and many of them wanted to take her as their wife. Manata’s father didn’t consider any of the suitors husband material.

One of her suitors was called Matakauri. He loved Manata and she loved him in return.

One day a giant called Matau stole Manata from her home and carried her away into the mountains. Manata’s father told Matakauri that if he could rescue his daughter, he’d approve of a marriage between them.

Matakauri knew that the giant always turned sleepy when the wind blew from the nor’west, and once conditions were right, he set out to rescue his love. When he arrived the giant was sound asleep.

“The giant has tied me to him with a rope made from the skin of his two-headed dogs. It is impossible to break,” Manata cried.

Matakauri tried to cut it, but to no avail. Manata started weeping and when her tears fell on the rope it dissolved. Freed, the lovers fled to safety.

As promised, the couple married, but Matakauri worried about the giant returning and stealing his new wife. When the wind blew from the nor’west again, he sneaked up to the giant’s home and found the giant curled up and sleeping on a bed of bracken. Matakauri set fire to the bracken and the giant suffocated before he regained consciousness. The giant’s body sank deeper and deeper into the ground until he created an enormous chasm many kilometers long. His entire body was consumed by the flames, except the heart, which kept beating.

Rain began to fall and it flowed into the new chasm. The heat generated by the fiery giant bonfire melted the snow on the nearby mountains. Soon the chasm was full of water and it remains as a lake to this day—a lake shaped like a giant who has drawn up his knees in sleep.

Meanwhile the giant’s heart still beats beneath the surface of the water, sometimes so hard that the waves thunder against the shoreline.

I didn’t realize we had giant myths in New Zealand, and I’ve been enjoying reading through Taniwha, Giants, and Supernatural Creatures by Aw Reed and Ross Calman. Do you have any local giant myths?

Today I’m visiting Lissa Matthews where I’m discussing Maxwell’s, the fictional club in Past Regrets. There’s a giveaway too.