New Zealand has some fascinating birds, some of which are rare these days due to man encroaching on their habitats and predators killing chicks or eating the birds’ eggs.

While I’ve been privileged to see many of our rare birds, I’ve never seen a kakapo. When hubby and I had an opportunity to see one, we grabbed it and flew to Wellington to visit Sirocco.

So, what is a kakapo? It’s a large, flightless parrot—the largest in the world—that is native to New Zealand. Not so long ago, there were only 18 left. A disaster, since kakapo do not breed every year. Breeding depends on whether there is sufficient food, and in the kakapo’s case this is the fruit of the rimu tree.

The kakapo were taken to predator-free off-shore islands where they were monitored and given supplementary feeding.

Sirocco hatched in 1997. As a chick, he suffered respiratory problems and it was decided to hand feed him and treat his breathing problems. Sirocco responded well to the treatments, but when it came time for him to return to the wild and the other kakapo, he refused. He’d imprinted on humans and didn’t recognize his species. The rangers attempted various ways to get him to stay with his own kind. One night, a ranger carried him to the other side of the island sanctuary, several miles away and left him before returning to the rangers’ hut. Sirroco was there to greet him on his return.

Sirocco became world famous when he jumped on wildlife photographer Mark Carwardine’s head and attempted to mate with him. The video appeared on YouTube and Sirocco became an overnight sensation.

These days, Sirocco is the ambassador for conservation. Although he spends much of his time in the wild, he also visits different parts of New Zealand to help raise awareness of the kakapo species.

Hubby and I visited Sirocco at Zealandia in Wellington. We watched a film about kakapo and Sirocco, then walked through the sanctuary to visit Sirocco and his handler.

At 18 years of age, Sirocco weighs 2.5kg and is the size of medium-sized cat. He’s very friendly and loves people. He was so cute – I wanted to steal him. I told hubby and one of the guides overheard me. She threatened to frisk me on the way out.

Sirocco is in a special enclosure with perspex windows. It made photos difficult due to reflections, but I liked this one of me and Sirocco. 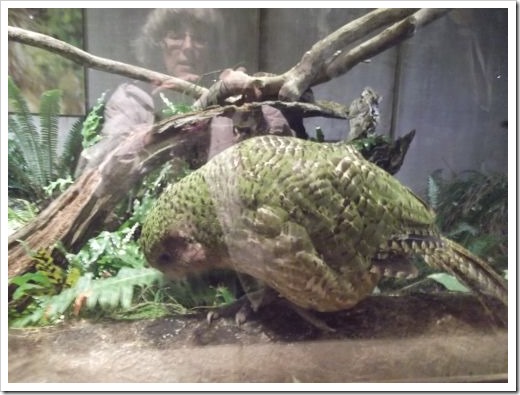 Sirocco with Shelley (reflection in the window) 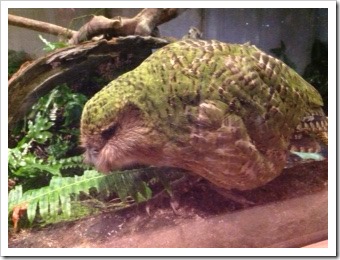 Sirocco has the cutest face with green and brown feathers. We spent about twenty minutes with him, and it went so quickly. It was a privilege to see Sirocco in person, and I’m so glad we made the effort to visit.