The moa is a flightless New Zealand bird that became extinct around the arrival of Europeans. There were several types of moa, the largest of which was taller than a full-grown man.

They had long necks, big sturdy clawed feet, an ostrich-like body and soft brown feathers that were almost like fur. 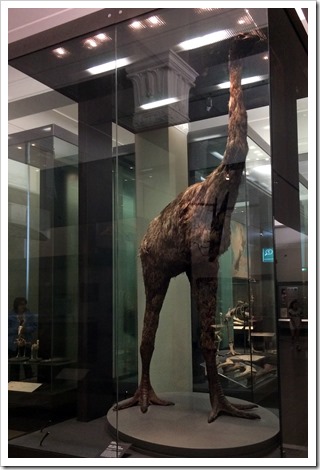 In 1993, three trampers reported seeing a moa while hiking near Authur’s Pass in the South Island of New Zealand. They walked around a corner and came across a large reddish-brown bird. The bird ran off but former British Army Commando, Paddy Freaney took photos of the bird and the footprints it left.

The sighting made world headlines. The three trampers were questioned and their stories were identical. The photos were blurry and not positive proof of a sighting. Some people thought the sighting was a hoax to attract customers to Paddy Freaney’s nearby pub. Paddy died in 2012 and never admitted to a hoax.

I love the idea of big birds wandering the plains of Canterbury and other locations in New Zealand. There are still occasional finds of moa bones and sometimes rarer moa eggs. Visitors can learn more about the moa in our museums.

My fascination led me to use these birds in one of my House of the Cat books, Hunted & Seduced. My characters Ellard and Gweneth meet the giant birds while they’re in the jungle on the planet Narenda.

What do you think of the trampers’ report? Hoax or not?

← Venice, the Romantic Destination #Travel The Ladder for Spirits →