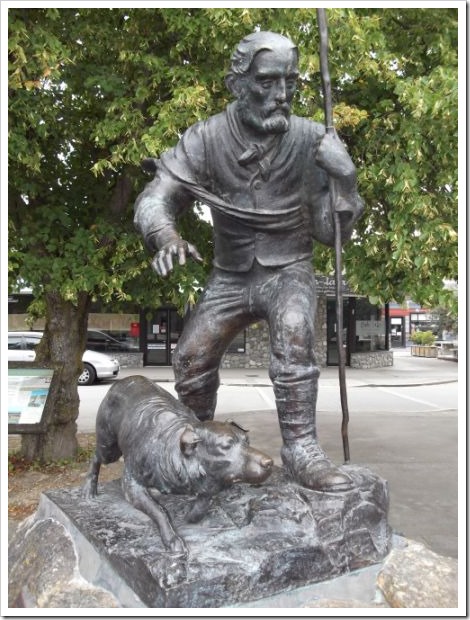 This statue of Mackenzie and his dog Friday stands in the main street of Fairlie, New Zealand.

The real story of James Mackenzie, the sheep thief and man from whom the Mackenzie country in the south of the South Island takes it name, is still shrouded in mystery.

He departed from his home country of Scotland under a cloud after doing some double-dealing with some cattle that didn’t belong to him. At first, he went to Australia and then on to New Zealand. No one is sure of his exact arrival in New Zealand.

He first came to notice when he was discovered in the possession of one thousand head of sheep belonging to Robert and George Rhodes. Captured, he managed to escape, fleeing barefoot into the surrounding countryside. This was on the 4th March 1855.

It wasn’t until ten days later that he was arrested in Lyttelton on the charges “feloniously taking, stealing and driving away sheep.”

On 17th April 1855 he was found guilty by a jury in the Supreme Court at Lyttelton and sentenced to five years of hard labor on the roads.

Nine months later on 11th January 1856, he was granted an unconditional pardon. The hard labor had caused his health to deteriorate and he also staged many escapes, which were expensive for the Government because they had to recapture him each time.  James Mackenzie spoke Gaelic and his English was poor, which meant he didn’t understand a lot of what occurred during his trial. These circumstances were communicated to the Governor by Mr Henry John Tancred, the Resident Magistrate at Lyttelton and Mackenzie’s pardon went through.

James Mackenzie left New Zealand shortly after his release and went to Australia. It is thought he died in Australia but no one knows for certain.

Mackenzie’s collie dog was called Friday. it is thought Mackenzie gave Friday commands in Gaelic since the dog refused to work for anyone else. She was a silent collie and worked the sheep in silence. I’ve heard it said that Mackenzie’s dog Friday was so well trained she could move a herd of sheep by herself while Mackenzie drank in the local pub. I don’t know how true this is, but it certainly adds romance to the tale.

I’m not sure what happened to Friday while Mackenzie was serving his sentence, but the dog was produced during the trial. It’s said the dog whimpered, Mackenzie spoke to her in Gaelic and then broke down and cried.

Visitors to Mackenzie country might find it strange that we’ve named an area after a sheep thief, but as well as being a shepherd, Mackenzie was an explorer and he found a region that is perfect for sheep. These days several large high country stations farm the Mackenzie region.

Source: The Story of James Mackenzie of the Mackenzie country, New Zealand, presented by Catriona Baker.