While doing some research for one of my books, I came across several superstitions regarding spiders. On the whole spiders are considered positive, and many people protected them from harm because they were considered lucky.

Here are a few superstitions:

1. If a spider is sighted during the evening, expect a letter in the morning.

2. If you kill a spider, it will rain the following day.

3. If you see a spider running toward you in the morning, misfortune will follow. 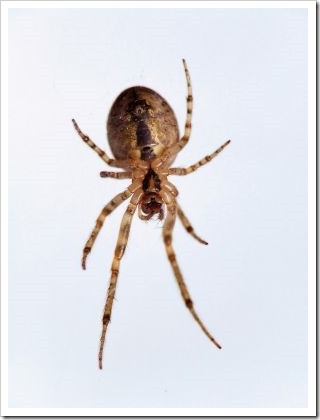 What I found slightly disturbing is that spiders were used to cure diseases such as ague, whooping cough and to treat bleeding.

1. Swallowed as a medicine, disguised by jam or treacle. The spider was swallowed alive.

2. A type of pill was made enclosing the live spider in cobwebs and this was swallowed.

3. The spider was enclosed in a nut or a linen bag and worn around the neck until the spider died.

Not so good for the spider!

Spider webs were also used to bind wounds and stop bleeding. I’m not sure how well this works, but I think I’ll stick with plasters rather than experiment.

The use of spiders as medicine contradicts the idea that spiders were considered lucky.

An Orkney saying goes: If you wish to thrive, let the spider go alive.

While a Devon saying goes: Who kills a spider, bad luck betides her.

Where do you fall on the spider scale? Are they lucky or unlucky?

Source: The Penguin Guide to the Superstitions of Britain and Ireland