Whenever we travel to Britain, I like to explore some of the historical properties and imagine what it was like for the people who lived in these homes.

This visit we went to Avebury Manor, a National Trust property in Wiltshire, England. The BBC filmed a series here called The Manor Reborn where nine of the rooms were decorated to depict different styles such as Georgian, Tudor, Victorian, Queen Anne and 20th century. What I liked about this property was that we were allowed to touch most things, open drawers and try on clothes.

The Queen Anne bedroom is named after Queen Anne Stuart. Although historians aren’t positive if Queen Anne actually visited Avebury Manor, it is entirely possible since Queen Anne often traveled from London to Bath to take the waters for her gout, gynaecological problems and dropsy. Her route would have passed through Avebury. BTW, she had 17 pregnancies between the ages of 18 – 34. Only 6 of her 18 children (since she had one set of twins) survived childbirth and of those 6 children only 1 (William) lived to age 11.

There are three rooms to the Queen Anne suite – the bedroom, an antechamber and a withdrawing room.

When we walked into the bedroom, the employee stationed in the room asked if I’d like to try the bed. “Yes,” I said, excited about touching. (I’m the person who desperately wants to touch whenever I see the “no touching” signs).

I took off my shoes and climbed up into the bed, then the lady proceeded to tuck me in. It was easy to see why they needed help to get into bed. I have long legs, and getting onto the bed was a stretch for me. It was very comfortable though and the silk dome, visible once I was in the bed was beautiful. I think I could sleep comfortably in Queen Anne’s bed. 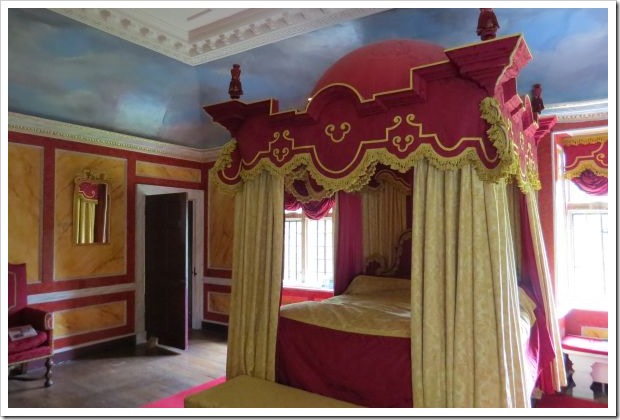 A shot of the bedroom. 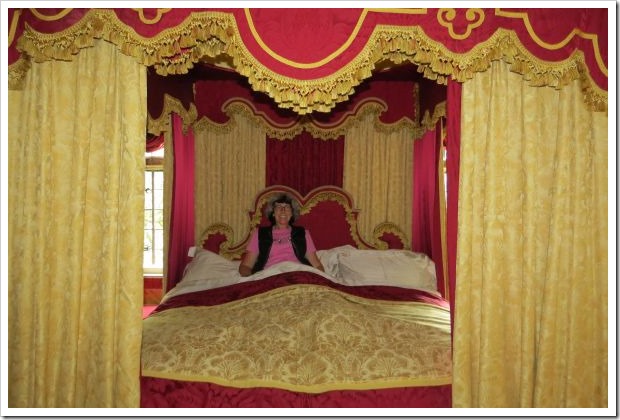 Me tucked into the Queen Anne bed. Very comfortable!

The other rooms were equally fascinating and my favorite was the Georgian dining room, but that’s a story for another day.