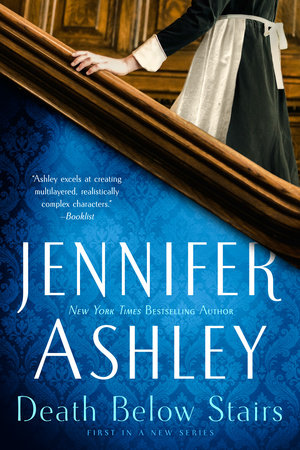 Death Below Stairs is a historical mystery and it is set during the reign of Queen Victoria (after Albert died). It is the first in a new series.

Highly sought-after young cook Kat Holloway takes a position in a Mayfair mansion and soon finds herself immersed in the odd household of Lord Rankin. Kat is unbothered by the family’s eccentricities as long as they stay away from her kitchen, but trouble finds its way below stairs when her young Irish assistant is murdered.

Intent on discovering who killed the helpless kitchen maid, Kat turns to the ever-capable Daniel McAdam, who is certainly much more than the charming delivery man he pretends to be. Along with the assistance of Lord Rankin’s unconventional sister-in-law and a mathematical genius, Kat and Daniel discover that the household murder was the barest tip of a plot rife with danger and treason—one that’s a threat to Queen Victoria herself.

The main protagonist is Kat Holloway, a cook in Lord Rankin’s employ. Kat is new to the job, and she takes her work seriously. Her assistant is found dead—murdered—in the pantry, and Kat feels responsible for the girl. Everyone thinks the murder is a robbery gone wrong, but Kat thinks differently and starts to investigate. Along the way, she recruits people to help her learn who murdered Sinead—-her friend the mysterious Daniel, another friend of Daniel’s who is a whiz with math and accounts, and the eccentric Lady Cynthia who prefers to dress as a man.

Kat is a professional when it comes to her cooking and this book is full of interesting cooking details plus mentions of what the family ate for dinner. I enjoyed these fascinating snippets just as much as the mystery part of the plot.

The characters are fascinating since they run the gamut of social ladder, yet they pull together to solve the mystery of Sinead’s murder. Kat has strength and integrity while Daniel is a man of mystery. He loves and cares for his teenage son and it’s obvious he has a thing for Kat. The romantic thread between the two is subtle, but it’s there and made me happy.

The characters pull this story along and kept the plot moving at a steady pace until the climax when we discover why the murder happened and who did it. The plot kept me guessing and the way it intersected with the politics and problems of the time made this an entertaining read. If you enjoy historical mysteries with well-rounded characters and a fast-moving plot, you’ll enjoy Death Below Stairs as much as I did.

Scandal Above Stairs, book two in the series released recently, and I enjoyed that one just as much.

For a quick introduction to Kat and Daniel you can also check out A Soupcon of Poison, which is a short story.

← Feel the Burn! A Dragon Romance and Giveaway The Story Behind: Military Men - Innocent Next Door #romance #research →