The King of Threadneedle Street

I bring you a historical with a very interesting title today—The King of Threadneedle Street. It was the title that grabbed my attention and made me look closer. Please welcome, Moriah Densley, and make sure you leave a comment to go into the draw to win some beautiful jewelry. 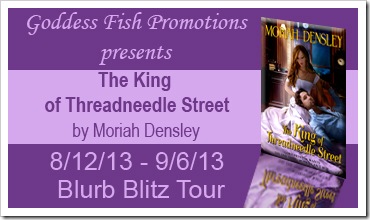 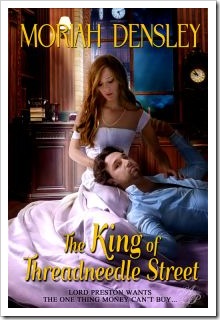 THE KING OF THREADNEEDLE STREET

He owns three shipping companies, a diamond mine, and his own castle.
He knows Portuguese, Hindu, Mandarin and Morse code.
His assets net thirteen million.

Andrew Tilmore, Lord Preston, the financial prodigy dubbed “The King of Threadneedle Street” wants the one prize out of reach: his childhood sweetheart. The papers can waste a sea of ink scandalizing over his lavender-eyed Alysia; so what if she is the daughter of his father’s mistress?

Alysia Villier learned the craft of the courtesan from her infamous mother―by osmosis apparently. A gifted artist who almost won the Prix de Rome, Alysia is not interested in following in her mother’s footsteps, since Andrew ruined her for any other man. But with her legal guardian—Andrew’s father―in control of her inheritance, she has little choice in the matter.

Keeping Alysia out of trouble and away from eager suitors becomes a cross-continental quest for Andrew. Not his old-fashioned family, the disapproval of the ton, nor even Alysia’s dedication to duty and propriety will stop him. Playing newspapers and investors like pawns, tumbling world markets, inciting riots… has he gone too far?

After being threatened with ruin by Andrew Tilmore Lord Preston’s parents, Alysia Villier runs away to Paris. With the help of people she thinks are her friends, she makes a living as a painter and an artist’s model. The same night she learns she’s in danger, her knight in shining armor comes to the rescue…

CONTEST: Go into a draw to win a genuine Victorian-style pearl jewelry set inspired by the book, including necklace, bracelet, and earrings. To receive more chances of winning follow the rest of Moriah’s The King of Threadneedle Street tour. 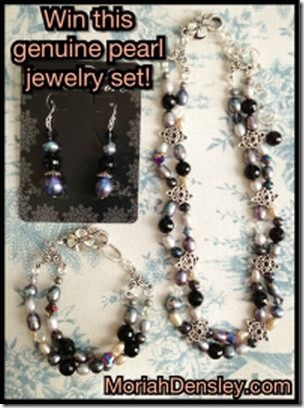 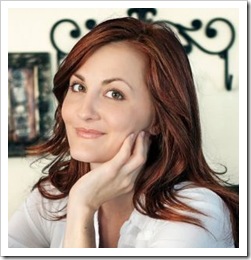 Moriah Densley sees nothing odd at all about keeping both a violin case and a range bag stuffed with pistols in the back seat of her car. They hold up the stack of books in the middle, of course. She enjoys writing about Victorians, assassins, and geeks. Her muses are summoned by the smell of chocolate, usually at odd hours of the night. By day her alter ego is your friendly neighborhood music teacher. She lives in Las Vegas with her husband and four children. Published in historical and paranormal romance, Moriah has a Master’s degree in music, is a 2012 RWA Golden Heart finalist, 2012 National Reader’s Choice Award “Best First Book” finalist, and 2012 National Reader’s Choice Award finalist in historical romance. She loves hearing from readers!