The weta – it’s a large and primitive insect, native to New Zealand. The reason I chose to write about wetas today is so more people know what they are. When I used a weta reference in my book Janaya, my editor didn’t know what I was talking about and I had to rewrite slightly to describe a weta as a prehistoric cricket-like insect. 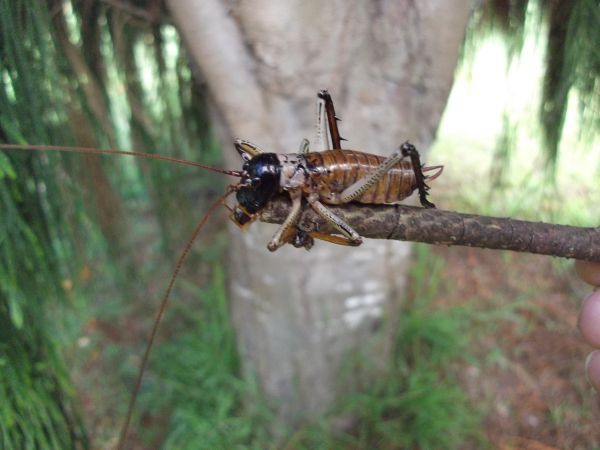 There are five broad groups of weta:

Wetas are nocturnal and live in a variety of habitats including grassland, scrub land, forests and caves. They live under stones and in rotten logs or in pre-formed burrows in trees.

They are mainly herbivores in the wild but are known to eat other insects. They can bite but are not poisonous. Species of weta are still being discovered and several are endangered. In the wild, they were traditionally eaten by the tuatara (a prehistoric reptile native to NZ) but these days many are destroyed by rats, cats and dogs and of course, humans encroaching on their habitat.

The weta sheds its exoskeleton when moulting.

At 18 months the male weta selects a female and they spend time together in the male’s territory. (Romance in the insect world!)

The Department of Conservation in New Zealand is currently involved in weta breeding programs and translocation to safe sites such as protected islands like Tiritiri Matangi and Little Barrier Island in the Hauraki Gulf. The weta respond well to a captive breeding program.

The following video is of a giant weta.

I’ve never seen a giant weta but have personal experience with both tree and cave wetas. We often find tree wetas in our garden and will return them to live in peace. They can nip and look creepy but I don’t mind them.

My experience with cave wetas is a bit more spooky. When I was a kid, my girlfriend lived on a farm with limestone caves. It was a favorite pastime to visit the caves and wander through them with a candle and maybe a torch to search for stalactites, stalagmites and glow worms. When I think about our cave visits now, I can see how dangerous it was, but for us it was an adventure – an hour or two of wandering through pristine caves. One day we discovered a new tunnel and were all set to charge into it to explore. I happened to shine the torch over the ceiling and it was covered with huge cave wetas! I let out a screech and dropped the torch, and we all decided to explore another part of the cave. I also took to checking my gumboots carefully and shaking vigorously before I put my feet in them. This lasted for a few weeks until the initial horror passed. I’ve never been bitten by a weta, but I’m always careful not to get too close either. I can appreciate them from a distance.

How are you with insects? Do you like them or hate them with a passion? Do you have any insect stories to tell? What do you think of New Zealand’s weta?