Scotland immediately comes to mind when I think of shortbread, and my next thought is always Christmas. It’s said that shortbread developed from a medieval recipe, with the modernized recipe attributed to Mary, Queen of Scots. Over time the ingredients changed, with butter replacing the yeast. Butter was an expensive ingredient, which meant shortbread was only baked on special occasions. Butter has become very expensive down here in New Zealand, so nothing has changed in that respect!

I tend to bake shortbread at Christmas. It’s one of my favorite biscuits to eat, a trait I fear I inherited from my father because it’s his firm favorite too.

The recipe I use comes from Jo Seagar’s Easy-Peasy Summer Entertaining recipe book. 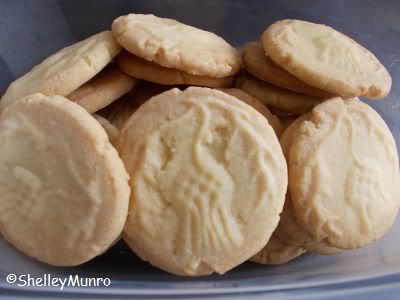 Beat the butter and icing sugar until creamy. Mix in the cornflour and flour. Roll into teaspoon size balls with your hands. Place on a tray lined with baking paper. Flatten and press with damp shortbread mold. Bake at 150C for 25-30 minutes until the shortbread is pale but crisp. Cool on a wire rack and store in an airtight container.

1. The original recipe says to roll out the dough and cut out star shapes. I’ve always found the dough too soft to do this–maybe because I tend to make this recipe during the heat of a New Zealand summer–and after experimenting I’ve found teaspoon size balls work best for me.

2. If I feel in the mood for a variation with bite I add 1 tablespoon of cocoa and 1 teaspoon of chili powder just before I add the flour and cornflour. Sometimes I’ll also add chocolate chips-the small kind.

3. If you don’t have a shortbread mold, press down with a fork. Dip the fork in a cup of cold water after flattening each biscuit to avoid sticking. 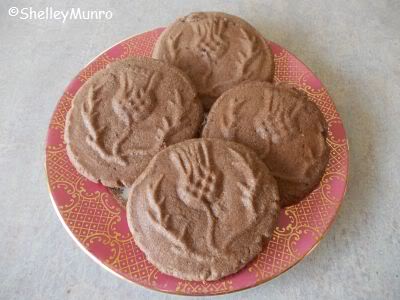 Here’s a photo of the Chili Chocolate Shortbread.

Are you a shortbread fan?