Want a new book to read for the upcoming weekend? Love paranormal romance?

My suggestion: Vampires Like It Hot by Lynsay Sands 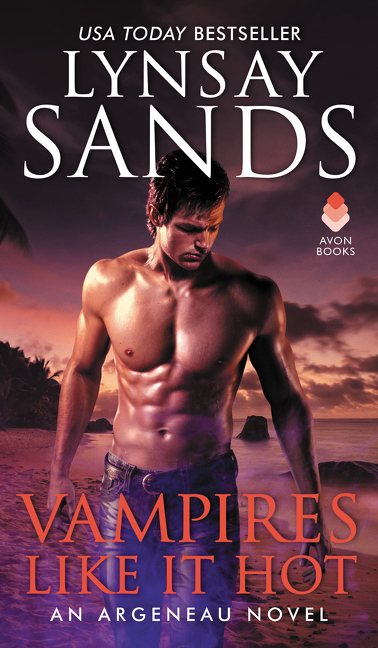 New York Times bestselling author Lynsay Sands brings the heat in this new Argeneau novel, as one woman is rescued by an irresistible immortal …

When Raffaele Notte pulls a barely dressed, disoriented woman from the ocean, the last thing he expects is for her to utter that word. The immortal has come to the island resort to help his cousin, but now, it seems, there are rogue vampires dining on unsuspecting tourists. And he soon realizes that not only is Jess a target, she’s also the life mate he’s been waiting for…

Vampires are real. Jess would’ve never believed it until she saw them with her own eyes. She knows she has to get off the island, and her gallant rescuer has offered to help. There’s something about Raffaele that’s unlike any man she has ever met, and his touch sends pleasure through her that is beyond all imagining. But when Jess discovers who he really is, will she risk life as she knows it for a chance of forever by his side?

Here’s an excerpt to tempt you:

“How did she end up in the water?”

Raffaele shook his head at the rapid-fire questions shot at him by Zanipolo and Santo as he carried the woman out of the water. Rather than answer, he merely said, “Bring my clothes, please,” and walked past them, heading for the resort buildings.

The men had already gathered his clothes for him on the way down, so merely fell into step on either side of him as he walked.

“Is she alive?” Zanipolo asked with a frown, leaning slightly in front of Raffaele to look at the woman in his arms as they walked,.

“Yes,” Raffaele said quietly. “I think she has just fainted from her exhaustion.”

“Are you taking her to the resort clinic?” Santo asked as they reached the rows of lounge chairs at the head of the beach.

“No. I want to look her over myself first,” Raffaele said solemnly.

“Why?” Santo asked at once.

“Two reasons,” Raffaele responded as they made their way out of the rows of chairs and reached the concrete paths leading to the various resort buildings. Much to his relief the paths were pretty much deserted at this hour with most people already in bed, or situated in the bar enjoying the entertainment. There were only one or two guests making their way to their rooms and they paid them no attention.

“What is the first reason?” Santo asked as they approached the paths around the pools.

“I want to look her over for bites,” Raffaele admitted.

“Bites?” Zanipolo asked with interest. “What makes you think she might have been bitten?”

“Because when I asked her if she’d fallen off a boat or cruise ship, she said no, she jumped, and when I asked why, she said—” he glanced around to be sure no one was near enough to hear, and then lowered his voice anyway as he finished with “‘—vampires.’”

“Bingo,” Zanipolo said with grim satisfaction as they got past the pools and approached their building. “She’ll be able to tell us where the vampire nest is and how they operate. It’s got to be some kind of dinner cruise or something. Or it could be a day cruise. She could have had to swim a long way.” He frowned over that briefly as they reached their building and walked along the open hall to the stairs, and then asked, “What is the second reason you want to examine her before we take her to the resort clinic?”

“When I got to her she was beyond exhausted,” Raffaele said as they started up the stairs. “Her words were slurred and she could hardly keep her eyes open. I thought it would be easier all around if I read her mind to see what had happened, and took control of her to drag her in.”

“And?” Santo prodded as they exited the stairs at their floor and started along the hall to their room.

Raffaele was silent for a minute, having trouble accepting what he was about to say himself, but when they reached the door to their suite and Santo pulled out his key card to unlock the door, Raffaele swallowed and said in almost a whisper, “I couldn’t read her.”

Santo had got the door unlocked and started to open it before Raffaele spoke, but now he stiffened and turned sharply to peer at him with amazement. “What?”

“Score!” Zanipolo shouted gleefully. “Didn’t I tell you? I told you! Didn’t I? Hot resorts are the way to go to find our mates! I so toldyou that!”

“Yes, you did,” Raffaele admitted with amusement as Santo pushed the door open for him to carry his life mate into the room.

“And he’ll remind you of that every day for the rest of his life,” Santo said dryly as he let the door close, locked it, and then hit the light switch, turning on the overhead light.

“Sì, I will,” Zanipolo agreed gleefully, moving to Raffaele’s side to peer down at the woman he held. Eyeing her almost reverently now, he whispered, “Cugino, your life mate is very pretty.”

“Yes, she is,” Raffaele agreed solemnly, his gaze sliding over her as well. Her lips were full and looked soft, her nose straight, and while they were closed now, he knew her eyes were large and lovely, and an eggshell blue. Her hair, of course, was wet, but appeared to be a dark brown.

“What is her name?” Santo asked, moving closer to look her over as well.

Raffaele stiffened at the question. “I don’t know her name,” he admitted.

“You didn’t ask her?” Santo asked with surprise.

“Are you kidding me?” Zanipolo asked with disbelief. “You finally meet your mate and you did not even ask her name?”

Raffaele opened his mouth to respond, but was forestalled when the woman in his arms suddenly began to shriek and thrash wildly about.

← Fall Into Love Romance Giveaway and Book Fair #bookwrapt #romance #giveaway The October FREE for All and Giveaway. Check it out today! #romance →