A notice before I get to my Thursday Thirteen:

I’m visiting Chris Redding and talking about writing plus my upcoming release Cat Burglar in Training.

Hubby went fishing last weekend, and he rang to tell me about the shark he caught. He was fishing in the Hauraki Gulf and totally inspired this post. 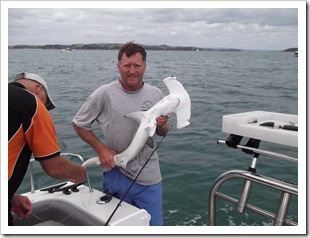 1. Blacktip Reef shark – they hang around reefs and grow up to six feet long.

2. Bull shark – this shark does well in both salt and fresh water. It’s the third most dangerous shark to people.

3. Great White shark – anyone remember Jaws? We have a lot of this variety of shark. They attack more people than any other type of shark.

4. Hammerhead shark – this is the one that hubby caught. See above photo. They removed the hook and released it after taking a photo.

6. Nurse shark – these are common in aquariums. They hunt at night and sleep by day.

7. Sandtiger shark – another shark that hunts at night. The female shark has two uterus. The strongest one eats the other before they are born.

8. Tiger shark – this one is also known for attacks on humans. They eat anything. Things such as boat cushions and alarm clocks have been found in their stomachs.

9. Whale shark – the largest of all sharks.

10. White Tip Reef shark – the most common shark encountered by divers and snorkelers on tropical reefs.

11. Wobbegong shark – this is an Australian/Pacific shark, and it lies on the bottom of the ocean waiting for fish to come near.

12. Zebra shark – this is a small and gentle shark, which is often kept in aquariums with other fish.

13. Thresher shark – this shark has a long tail, which it uses to help catch its food.

Okay, who watched Jaws, and how long did it take you to get back in the water? I watched the movie with my brother. For a long time after seeing it, whenever I went swimming I’d keep touching my legs to make sure they were still there!