For years I’ve thought about going on a dolphin watching trip on the Hauraki Gulf, Auckland. I mean, it’s my own backyard and I should explore. I first took the trip in January. Unfortunately, we didn’t see a single dolphin, but I received another trip as compensation.

This time, the weather was a little overcast with rain. Hubby dropped me off at Z pier, and I boarded the MV Dreamweaver. 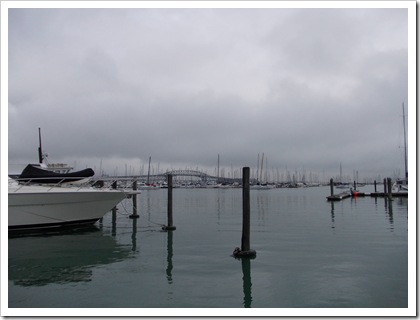 The staff on board the Dreamweaver were brilliant. They were hospitable and knowledgeable about the different dolphins, whales and birds we might see during our trip.

The weather cleared and yachts and fishermen came out in force, ready to spend a day out on the water. We motored past Rangitoto Island, Auckland’s youngest dormant volcano at around 600 years old, and past several of the other Gulf islands including Rakino. 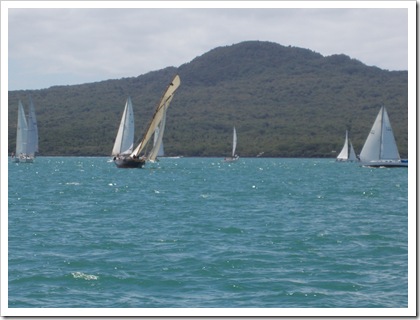 My fellow passengers ranged in age from about three-years-old to grandparents. The kids were well-behaved—much to my relief—and they were the ones who spotted the pod of dolphins first. It was the bottlenose dolphins we saw. This species aren’t as friendly as the common dolphin but they hung around our boat as we travelled slowly along. It was a thrilling experience, looking over the bow of the boat to see the sleek bodies of four or five dolphins surfing along with us. 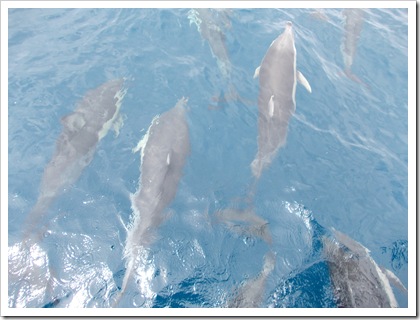 There were about 40 dolphins in the pod with several youngsters, almost hugging the bodies of their mothers as they swam along. We saw splashes of water when fins and tails broke the surface, and the water is so clear we could see the flashes of white bellies and their long pointy noses when the dolphins went under water. Since dolphins are mammals, they come up for air, and it was easy to hear the gasp-like sounds they made each time they surfaced.

Cameras clicked frantically, and both children and adults alike exclaimed with sounds of loud excitement. Yes, me too!

Some of the trips see orcas and Bryde’s Whales. This was the only dolphin pod we saw, but we did see several Little Blue Penguins and watched gannets fishing too. The Australasian gannets plunge into the water at great speed, making a huge splash. Over time, the gannets go blind and die of starvation. The blindness is caused by the continual diving, which damages their eyes.

It was a rewarding day, and once again, I was impressed by the beauty of the Gulf. It’s so handy and is easily accessible to all with many ferries operating in the region. 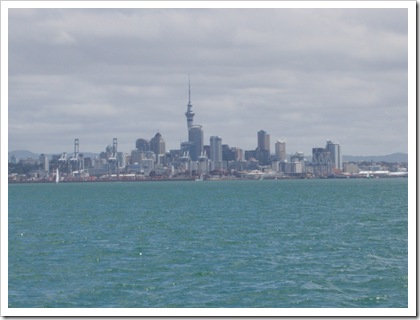 We sailed back into central Auckland, extremely satisfied customers. If you’re ever visiting Auckland I highly recommend a trip out on the harbor with Dolphin Planet. They go out of their way to make your day memorable. I certainly enjoyed my day trip.

Is there any type of animal that you’d like to watch in their natural habitat?