Check this out! Brinda Berry has a new release. Whisper of Memory is book two in the Whispering Woods series. 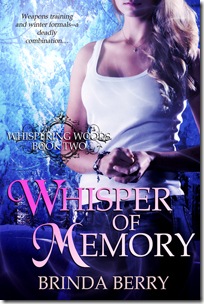 All Mia ever wanted was to fit in at Whispering Woods High. But being a portal-finder who dates a guy from another dimension sort of makes it hard. A month ago her brother disappeared, and agents from the IIA began policing people’s movements through dimensions. She’d trusted Dr. Bleeker from the local university when he’d told her the IIA were the bad guys. But even a girl with an extraordinary ability to sense things can make mistakes.

Now two people are dead, and as a portal gatekeeper for the IIA, Mia needs to find Dr. Bleeker before he hurts anyone else. And her boyfriend Regulus, an Agent for the IIA, carries secrets of his own. Between learning about weaponry, finding the perfect dress for the winter formal, and catching bad guys, who has time to fit in?

Check out the Whisper of Memory book trailer.

Before her involvement with the Interdimensional Immigration Authorities (IIA), Mia Taylor had only used weapons in video games. Now, she’s required to protect herself. Which weapon does Mia get to practice? She learns how to throw a knife. What would be your weapon of choice?

My answer: I’d like to be skilled in hand-to-hand combat. Kicks. Punches. My hands would be lethal weapons. I would also have a very intelligent canine companion who could creep up behind my enemies and nip them on the butt to give me an edge.

What would be your weapon of choice?

← A Supernatural Caged City: Enter at your peril! Bushwalking in the Waitakere, Auckland →