Review – Hero of My Heart by Megan Frampton 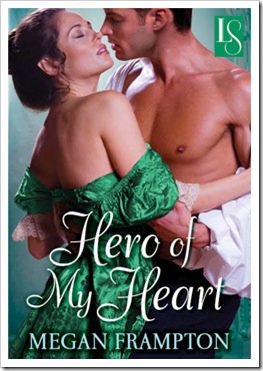 When Mary Smith’s corrupt, debt-ridden brother drags her to a seedy pub to sell her virtue to the highest bidder, Alasdair Thornham leaps to the rescue. Of course the marquess is far from perfect husband material. Although he is exceedingly handsome, with a perfect, strong body, chiseled jaw, and piercing green eyes, Alasdair is also too fond of opium, preferring delirium to reality. Still, he has come to Mary’s aid, and now she intends to return the favor. She will show him that he is not evil, just troubled.

Alasdair Thornham is a good man, but he’s addicted to opium. He finds himself in a pub where an auction is taking place. Mary Smith’s brother is selling off his virginal sister in order to earn money to pay his debts. Alasdair realizes something is wrong with the woman, suspects the use of drugs, and decides to act. He buys her, and thus starts an adventure that changes both of their lives. At first Mary fights the situation, but Alasdair decides they should travel to Scotland and get married.

Both Mary and Alasdair are great characters. Alasdair, in particular, is interesting and not your typical hero. He’s addicted to drugs, and although he doesn’t care about himself, he tries to do the right thing for Mary and to protect her with his name. Once she is safe, he’s determined to complete his downward spiral into drugs and oblivion. Mary will be his last good deed. Meanwhile, Mary hopes to go to London to find her missing mother—she’s recently discovered her mother is still alive and that her parents weren’t married—then she intends to disappear and leave her husband to his insanity. Both main characters have solid goals and set about trying to make them happen. But the stakes change when they make love. Gradually, their feelings for each other shift, and it was wonderful to watch.

The secondary characters—Mary’s brother and Alasdair’s cousin—are both determined to stop the marriage. They’re both motivated by greed and money, and make suitable villains, forcing our hero and heroine to take action.

Hero of My Heart is an unusual historical because it takes place away from the social scene of London. The hero and heroine attempt to steal in order to get what they need, and suffer the consequences when things go wrong. I liked the unexpectedness of this story, and enjoyed the closure at the end. An unusual and satisfying read that takes the reader on an emotional journey while two people learn what they want isn’t exactly what they need. Recommended.

ARC received via NetGalley in exchange for an honest review.