The One Where Rosalind Snatches a Kiss

Welcome to My Sexy Saturday, a fun blog hop. Here are the details: every Saturday, published and unpublished authors will be sharing 7 words, sentences, or paragraphs from a work-in-progress or an already published story.

My snippet this week comes from The Spurned Viscountess

, a historical romance. Rosalind has an arranged marriage with Lucien, Viscount Hastings, and unfortunately Lucien isn’t interested in her. Rosalind is determined to grab security and have babies, so she isn’t going easy on poor Lucien. Something weird is happening at the castle and Rosalind is investigating. Lucien just happens to get in her way and she seizes the chance to further her cause. Just quietly, he doesn’t stand a chance!

The hinge creaked when the door opened. Rosalind watched with a combination of trepidation and anticipation. The gap widened to reveal Hastings’s shiny black boots, his mud-splattered stockings and breeches. Her eyes rose to his gray shirt and black jacket. Her mouth dried, her pulse pounding with expectancy, excitement. She swallowed and lifted her gaze to loose black hair and his…mouth. Finally, she met his astonished eyes.

Speak, she thought frantically. Quick before he asks what you are doing here. Distract. Attack. Something. Anything.

“You’re back,” she cried and planted a kiss on his beguiling lips.

He tensed. In shock or astonishment, Rosalind wasn’t sure but ceased to care. His lips were as soft as a baby’s skin. Her hands curled into his shoulders and she leaned into him, enjoying the play of hard muscles and the earthy masculine scent of him.

“What are you doing?” he demanded finally, pulling away enough to glare at her.

“I’m pleased to see you.” A stupid half-wit would sense his bewilderment. But along with confusion lay shocked enjoyment. And that, decided Rosalind, was a good thing. 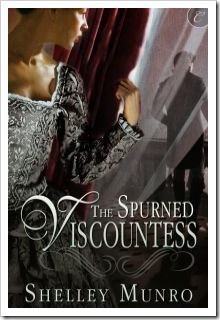 Cursed with the sight and rumors of witchcraft, Rosalind’s only chance at an ordinary life is marriage to Lucien, Viscount Hastings. She doesn’t expect love, only security and children of her own. Determined to go through with the wedding, she allows nothing she encounters at the gloomy Castle St. Clare to dissuade her.

Recently returned from the Continent, Lucien has no time for the English mouse his family has arranged for him to marry–not when he’s plotting to avenge the murder of his beloved Francesca. He has no intention of bedding Rosalind, not even to sire an heir.

Though spurned by her bridegroom, Rosalind turns to him for protection when she is plagued by mysterious accidents and haunted by terrifying visions. Forced to keep Rosalind close–and tempted into passionate kisses–Lucien soon finds himself in danger of falling in love with his own wife…