Felix and Casey: Their First Meet

Favored by Felix is a new sci-fi romance, which is due out on 13 Feb.

The man walked—no, prowled was a better description for his gait—closer and came to a halt a few feet from her. He flashed a grin full of white teeth, and she found herself returning the expression. A natural smile instead of the conscious ones she forced for her best friend while she pretended everything in her world was perfect.

“Let me see.” He pretended to ponder while his gaze slid over her in a way that made her feel like a woman instead of a soldier. “I’ve heard there is a race of aliens who have a shortage of women. They’re out to steal themselves mates.”

“I’m all a-shiver,” she said, returning his gaze of interest.

There was much to be admired. His black hair hit his shoulders and was three—phrull—four or five times longer than her own black locks. Even in the dim light cast by the astral moon and the resort’s artificial illumination, she could see his gorgeous green eyes. Just a few shades darker than the color of the jade sea that surrounded Ione. His broad shoulders were garbed in a loose white shirt, his lower half in tight black trews and black boots, and he was taller than her six feet by a few inches.

“And what if I’m one of these alien males?” His voice held a smoky tone that reminded her of late nights and smooth aged liquor on ice. He stood close enough now for her to feel the heat coming off his solid body.

“I should start running?” Gods, was that flirtation? She’d thought she’d forgotten how, since one didn’t fraternize romantically with fellow soldiers. She cocked her head a fraction. “Scream for help?”

“You’re lucky, sweetheart. Tonight, all I’m after is a kiss.” 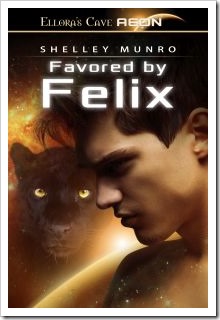 Attractive yet with an air of sadness, Casey snares Felix Mitchell’s attention at first sight. As feelings deepen, he comes to realize Casey just may be his perfect mate. But despite their shared passion, something is amiss with his intriguing lover, something that keeps her from giving herself fully…something she won’t share.

Unexpected troubles plague the resort, drawing the couple ever closer. But the biggest danger comes when Casey finally shares her secret, revealing a familial enemy—and his shocking plans for Casey’s future.

Inside Scoop: Felix may look big and bad, but Casey knows her shifter mate is just a big pussycat.

To read other My Sexy Saturday excerpts follow the links below: