Cruising Through the Panama Canal

Although I’ve visited Panama before via land (around thirty years ago) and peered at the canal from the shore, I was looking forward to actually sailing through. A small part of me wondered if I might get bored—I mean, an entire day of canals then lake then more canals before we hit the ocean again. I needn’t have worried because there is a lot to see and photograph.

We watched the men driving the mules, which are large vehicles that are used to keep the ships centered in the lock. They’re a bit like train locomotives since they run along tracks on the edge of the canal. We spotted birds and crocodiles sunning themselves on muddy banks and we watched the canals fill and empty of water, lifting and lowering our ship. It was also interesting watching the ship that sailed in the adjoining canal.

Here are a few facts about the Panama Canal:

1. The canal connects the Atlantic and Pacific oceans.

3. Complete control of the canal passed to Panama at the end of 1999.

4. Each ship is charged a toll, depending on their freight weight or passenger capacity.

5. The toll must be paid before the ship enters the canal.

6. Gravity feeds the flow of water that raises the level of the locks.

7. The average transit time to pass through the canal is ten hours but this can depend on the volume of shipping.

8. Pilots board each ship at the start of their journey through the canal.

9. The French attempted to make the canal first and lost over 20,000 workers to tropical diseases. Yellow fever and malaria in particular.

10. Once the Americans took over, they still lost 5609 workers to disease and accidents.

11. Nicaragua was also considered as a place to build the canal. The volcanoes in Nicaragua were part of the reason Panama was the preferred choice. 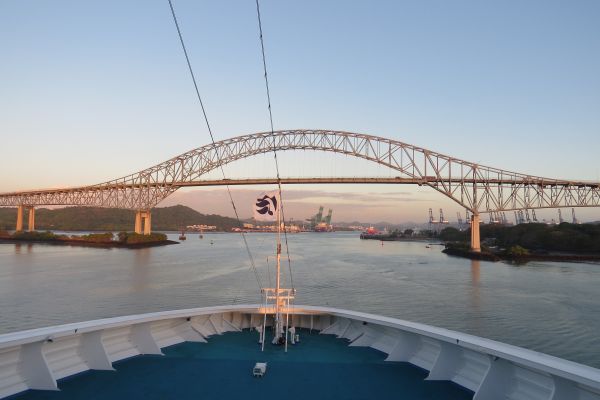 Almost at the canal. It’s time for our adventure to start. 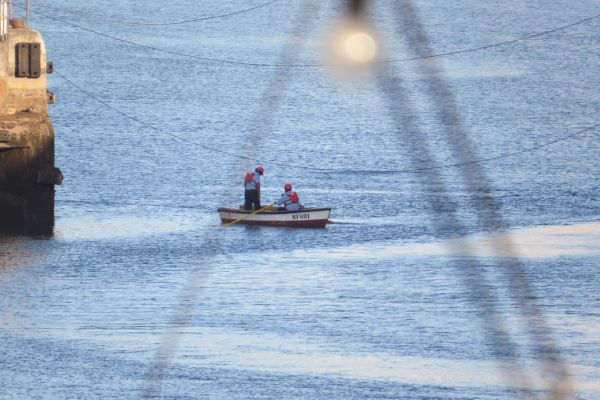 Despite our high tech times, these two men row out to the ships with lines. The big ships dwarf the tiny boat. 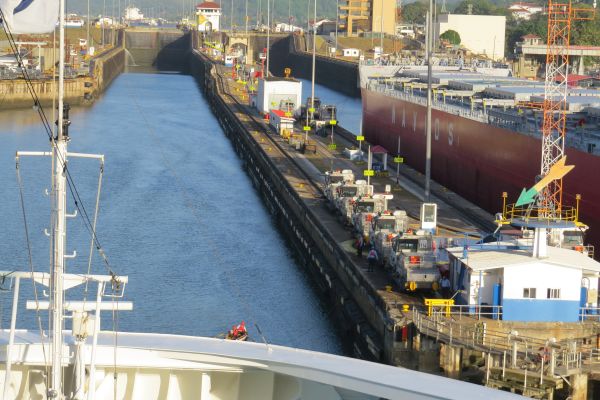 Entering the first lock – the Miraflores. I was wondering how we’d fit as the lock didn’t look very wide! 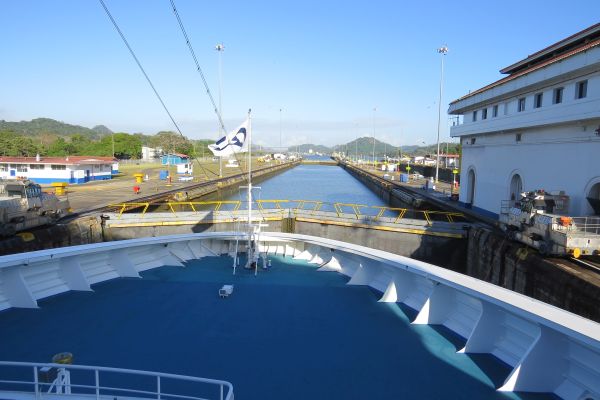 We’re partially inside the lock. It became more obvious that we would fit, but it was a tight squeeze. 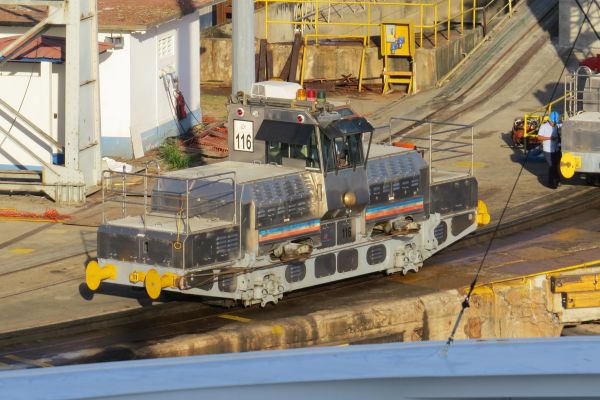 One of the locomotions or mules that are used to guide the larger ships into the locks. 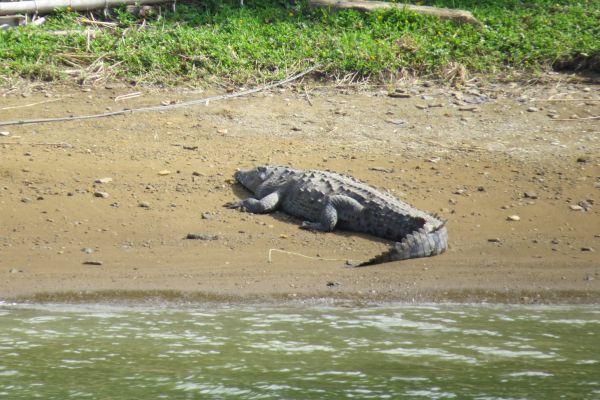 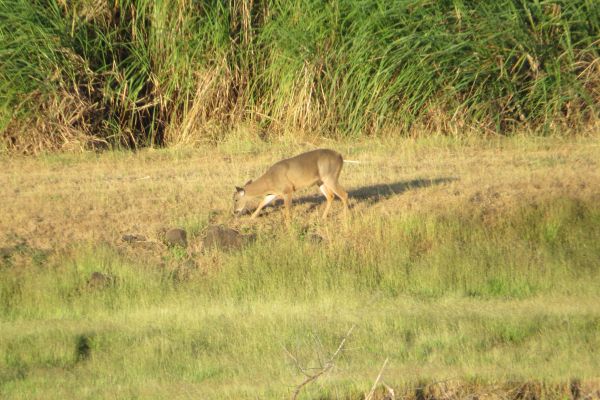 Some of the wildlife we saw while on the canal. 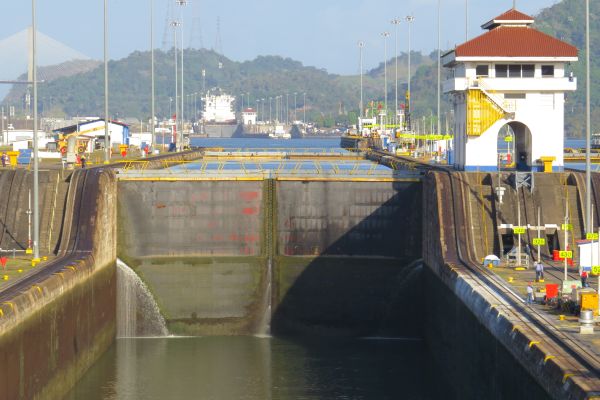 We’re just about fully inside the canal and ready for the gravity-fed water to lift us up a level. 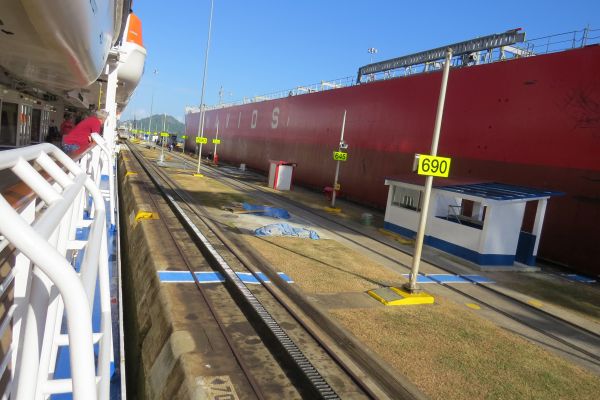 Mind the gap! Check out the tiny gap between the wall of the canal and the ship. The rail tracks are those used by the mules. 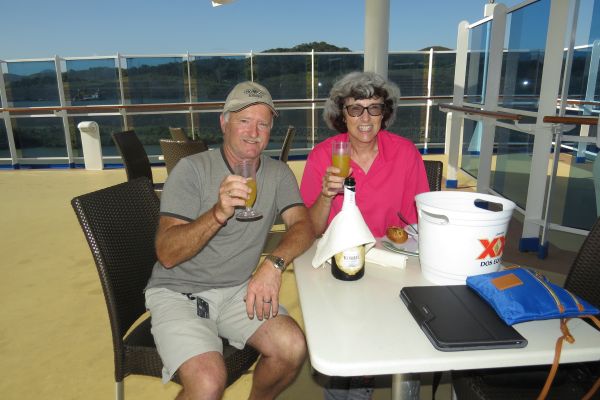 Mimosa time! It was hard work watching and photographing the trip through the canal. 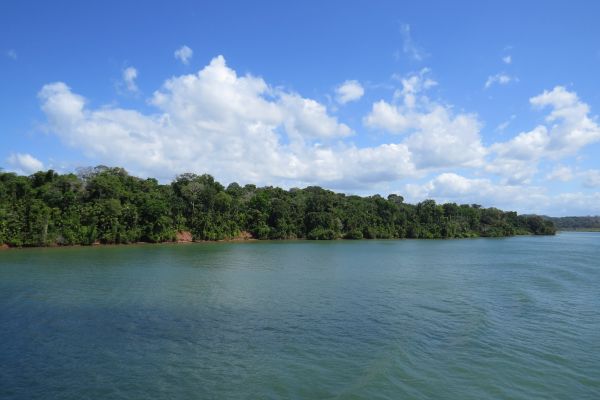 This is Gutan Lake, the man-made lake between the two sets of locks. 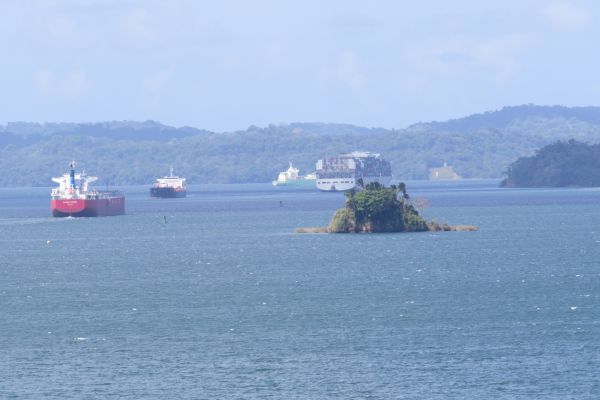 This is a shot of some of the other shipping traffic waiting on Gutan Lake for their turn to go through the locks. If you’re in a hurry, you can pay an extra fee to get through faster. 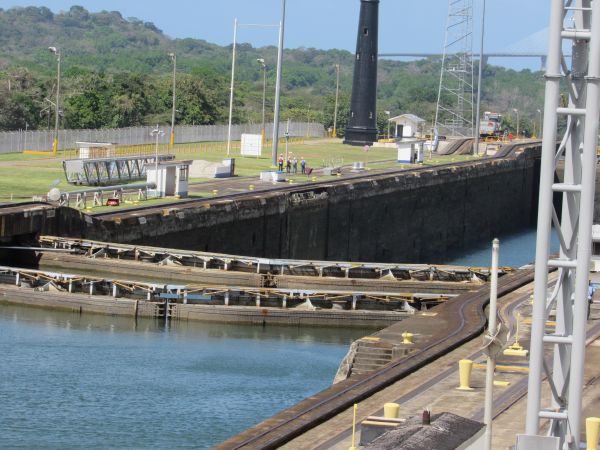 This is the Gatun Locks, and it was easier to see because the locks went “downhill”. 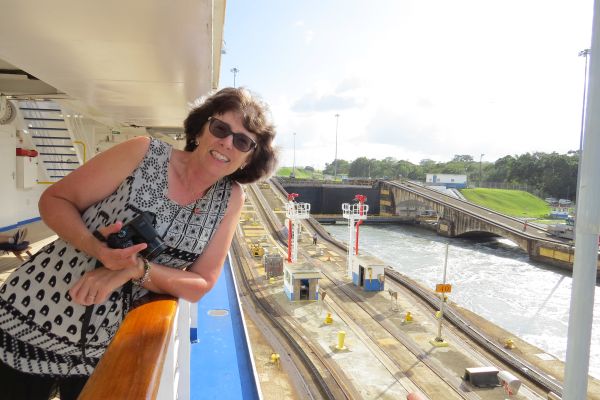 Almost at the Atlantic Ocean. The final part of the Gatun locks.

Traveling through the canal on a cruise ship was a fun way to experience the workings of the Panama Canal. In truth, I thought the engineering and technical stuff would get boring, but the day went surprisingly quickly and I enjoyed it immensely. If you ever have a chance to do this cruise, I highly recommend it.