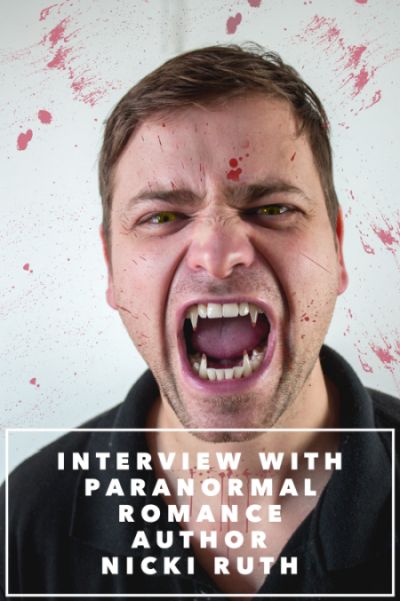 According to Nicki, she is a romantic at heart who loves a bit of history, a splash of adventure, and all things paranormal. She enjoys stories about vampires, werewolves, and other shifters, with a healthy dose of romance. Her first book, Dark Blooded Desires, started as a dream and ended as a dream come true. She is currently writing on her balcony that overlooks a parking lot.

Nicki, hello and welcome. Please tell us a little about yourself and how you started writing.

I started writing in 2017 after an intense, steamy dream which included a lone vampire looking out into the vast blackness of space. That turned out to be my first book, the first six chapters I wrote in one night at 1 am. This, despite not having any creative writing background. A friend of mine asked their friend that edited professionally to take a look at what I’d done. I was blown away when they said I had the gift of story-telling (my punctuation is another matter. LOL)

Then 2018 came and took a pretty bad turn. I hated my job, my relationship imploded, and along with an emotional medical issue, I was incredibly overwhelmed. But I continued to write and it was my best therapy. It turns out that writing is my escape from the world and a major stress reliever. Now I want to provide an escape for my readers as well.

Dark Blooded Desires is the first book in the Bonds of Damurios Series. I scooped this next bit from your blurb: “Debut author Nicki Ruth weaves an action-packed vampire thriller that mixes blood, magic, and sizzling romance set in a new futuristic fantasy world.” By the sounds of this, you’ve twisted and woven several genres together, which I love as a reader. What was the spark behind your story?

I love dabbling in all types of myth and lore. You’ll often find me glued to the history or discovery channel with my own “what if” scenarios. But I wanted to go in another direction from typical vampire lore for my story. I started with Babylonian history which I briefly sampled. Many have asked, but aren’t vampires supposed to be cold, aren’t they dead. Well mostly. In my world, they have their own “blood” planet similar to our “water” planet, Earth. I kept their immortal, non-aging life and supernatural ability since that’s the best part of being a vampire (right?).

But I really start borrowing from Hindu and Japanese mythology, as well as my unique twist on the ‘genie in the bottle’ lore in book 2. As the series progress, I’ll also be throwing some gods into the mix so it’s going to be fun!

Vampires! What is it about vampires that made you want to include them in your writing? What’s the attraction?

What’s NOT to love about vampires! They’re my absolute vampire paranormal species. When I was a child I fell in love with Bram Stokers’, Dracula (the movie), and was heartbroken when (SPOILER ALERT!) he died. I wondered why Dracula couldn’t have his love? And what if he survived and had his happy ever after?

I prefer the True Blood type of vampires than the Twilight types, and I keep that theme in my books. My vampires are not afraid to shed blood and can be quiet ruthless. Who doesn’t love a vampire who would do anything for his/her love?

What sort of research did you do during the writing of Dark Blooded Desires?

I researched a good bit of mythology from Greek to Hindu to Aztec. This was no burden for me as I love history. But it does take up a lot of time. I once spent three hours researching male Babylonian names. Three hours!
I also rewatched Star Trek (the Chris Pine version) to re-familiarize myself with some futuristic concepts. This too was also no burden since I’m a Trekkie. I already read a lot of vampire stories, so I knew what I wanted to do with my vampires.

Who is your favorite fictional vampire and why?

OMG. Just one? I mentioned Bram Stoker’s Dracula, but for books I loved Kresley Cole’s Lothaire; Xadist from JR Ward’s BDB, and Eric from True Blood.

As you can tell if you’re familiar with these characters are very flawed and can get a bit bloody. LOL.

I understand you have a free prequel to Dark Blooded Desires. How do readers get their hands on this?

The free prequel, A Vampire Loves Forever, is available on my website, www.nickiruth.com. You can also look out for it in upcoming Bookfunnel or Prolificworks promotions

What is the best place for readers to learn more about you and your upcoming paranormal romances?

These days it would be social media. I’m usually active on Instagram and Facebook and tend to post updates there first. I’ve also had a couple of readers email me directly, and I was glad to answer their questions.

Thanks so much for visiting today, Nicki! 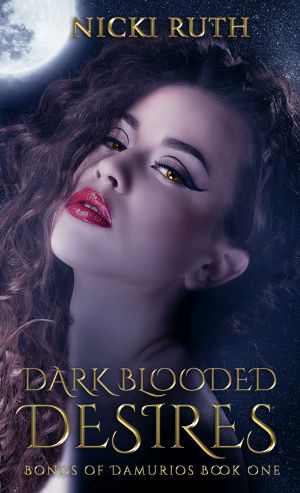 He was just a ruthless vampire out for vengeance. Until her.

Alone, asleep, and adrift. That’s how Alexios finds the woman he takes aboard his ship. But she’s not all she seems. Her face is a reminder of a past he’d long tried to forget. A reminder of his failure to save those he’d sworn to protect. But he’s on a mission to find and kill his sire for years of torment. He can’t allow the beautiful creature to distract him from his centuries-long vendetta. Even though her teasing smiles and taste of her blood lights his body afire.

She hungers for blood, and him.

Davina, if that’s even her name, wakes up having no clue of who she is. All she knows is that dreams of fire, blood, and destruction stalk her waking moments. Something sinister churns within but she refuses to succumb to its dark desires. Only Alexios, the handsome vampire Captain, calms the roiling waves of her urges and kindles her passion.

The answers are closer than they think.

When Davina loses control, it becomes imperative Alexios help her control the darkness within. But ancient forces plot to destroy them both and time is running out. Will they solve the mystery of who she truly is and stop her from becoming the monster she fears? Or will the world be ruled by her dark blooded desires?