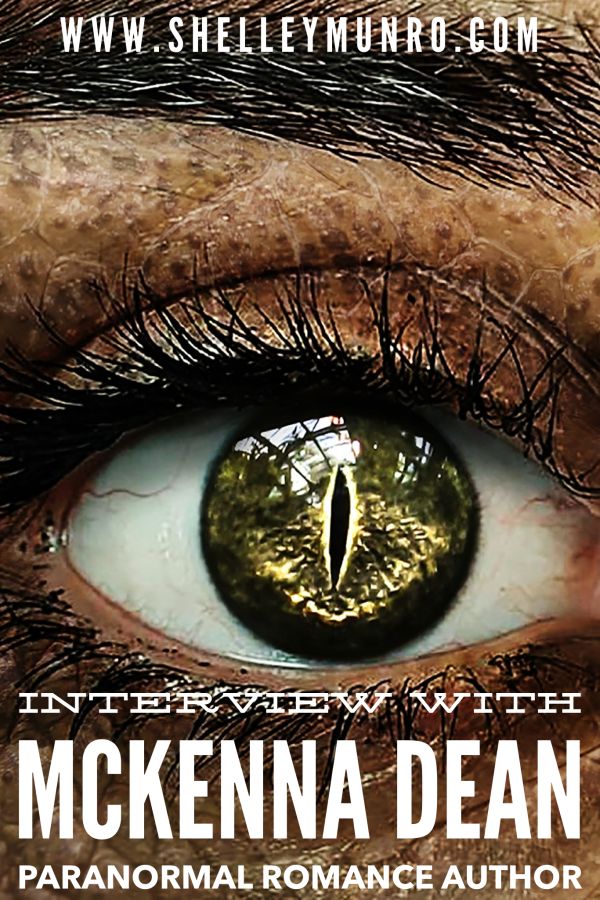 Today, I’m excited to welcome McKenna Dean to my blog. McKenna Dean has been an actress, a vet tech, a singer, a teacher, a biologist, and a dog trainer. She’s worked in a genetics lab, at the stockyard, behind the scenes as a props manager, and at a pizza parlor slinging dough. Finally, she realized all these jobs were just a preparation for what she really wanted to be: a writer.

She likes putting her characters in hot water to see how strong they are. Like tea bags, only sexier.

Hi, McKenna! Your website tagline is “Paranormal lives here.” Please tell us a little about yourself and what made you write paranormal romance.

I’ve been writing for about 10 years now, having cut my teeth in fanfiction. I had a hard time settling down to one genre at first—I love so many! Romance, mysteries, science-fiction, historical romance… finally, I realized that most of my stories had that little extra twist that comes from the supernatural—and my experiences working with animals just lent itself to writing about shifters.

I also love exploring that sense of “other” you get with paranormal romance. It’s such a great genre for examining our social structure. Not to mention, my favorite stories center around found families and finding your tribe. Paranormal romance has such wonderful scope for world building, too.

You write several series, but let’s focus on your Redclaw Security books today. You’ve won awards with these books, so please give us a little background. What was the inspiration behind your series?

I’m so glad you asked! Redclaw Security is an elite firm of paranormal agents who investigate and solve shifter matters. Prior to the use of nuclear weapons in WW2, there were very few shifters, mostly of the mythological kind, such as phoenixes, dragons, and griffins. Nuclear testing activated dormant shifter genes in the rest of the population, creating the wolf, big cat, and bear shifters (and more) we all know and love. At the same time, artifacts of great power were triggered as well, many of which can only be used by those with the shifter gene. The Paranormal Council formed Redclaw to collect, study, and isolate such artifacts, as well as serve as a kind of law enforcement for shifters as they can’t take their problems to the regular police. The Redclaw books can be read as standalones, and each of them feature a member of Redclaw in some form or another, showcasing a different set of characters with each story.

I’m also working on the origin story of Redclaw. Set in the 1950s, the Bishop and Knight books feature a pair of human agents working within Redclaw in its early days. Henrietta “Rhett” Bishop is a former socialite in desperate need of a job, who’s been tasked with recruiting a brilliant but discredited scientist, Dr. Peter Knight, to work for Redclaw. I’m having great fun writing these stories, which I liken to Nick and Nora meets Warehouse-13. The first in the series, Bishop Takes Knight, should be out in June or July 2019.

I’m very excited about another planned series, however! Whereas the Redclaw books feature different characters within the agency, the Better off Red series is going to focus on the Major Shifter Crimes division within Redclaw. Tiger-shifter Morgan Delaney is in charge of MSC, leading her teammates fox-shifter Jason Fox (yes, people make jokes about his name), hedgehog-shifter Mark Mabry, honey-badger shifter Lex Reeder, and ocelot-shifter Perdita Hansen as they tackle the gritty crimes of the paranormal world. Her first big case on returning to duty after killing her ex in self-defense involves shifters being murdered for their DNA—and all signs point to wealthy industrialist Rian Stirling, who happens to be her boss’s half-brother—as well as her fated mate. I can’t wait to share those books with you guys!

What is your favorite paranormal creature to write? Do you like felines or wolves best, and what research did you do to write your shifters?

I’m a biologist and have worked as a dog trainer and a vet tech. Writing animal scenes are the easiest part of my stories! I do spend a fair amount of time online researching specifics—such as the length of a grizzly bear claw (Two to four inches) and whether or not tigers can purr (they can’t! Cheetahs are the only big cats that purr). Picking between the two is like asking me to choose between dogs and cats. Um, both? Though given the number of cat shifters I have in my stories, it looks like the felines are in the lead right now.

What comes next in the Redclaw Security series? Can you give us a few hints?

People have been begging me for bear-shifter Andy Grant’s story, and I promise it will come. I’ve been eyeing Morgan’s younger sister as a potential mate for him. Can you imagine how hard it would be to live up to your big sister, who’s a tiger-shifter and head of one of crack teams within Redclaw, when you’re ‘only’ a cat shifter and a forest ranger? Bridget is going to learn not to compare herself to her sister, and find love along the way.

Ask any author, and they’ll tell you writing is hard work. I like to have a cup of tea on hand before I start my working day. Do you have any rituals to get you in the mood to write, and what is your favorite time of the day to add to your word count?

My favorite time to write is in the morning, but that rarely happens. I hit the ground running and am at work by 7:30 am each day, often putting in ten to twelve hours. I like the idea of rituals, but mostly I’m sneaking writing in here and there, in between other things. My idea of heaven is a weekend in a cabin, where I take the dogs for long walks in the woods (the best time to brainstorm!) and write all afternoon and evening.

I understand you have a free story called Snowfall, which is part of the Redclaw Security series. How do readers get their hands on this and does it standalone?

Oh, that’s easy! You can sign up for my newsletter and get Snowfall for free when you do so. It’s a short story set in the Redclaw universe, but I love Paige and Nicholas so much I’m planning to give them their own full length story someday! And yes, like all the Redclaw Security books, it can be read as a standalone. The Bishop and Knight books, as well as the Better off Dead stories, will be more traditional series.

What is the best place for readers to learn more about you and your upcoming releases?

The best place is to follow my blog—I tend to post about once a week with snippets about life on the farm and upcoming plans. I’m far more disciplined about posting there than sending out a newsletter—most of the time those are featuring stories on sale. If you go to the right sidebar on my blog page, you’ll see the subscription box for the website. You might have to scroll down before you see it, especially if you’re on your smartphone.
http://mckennadeanromance.com/blog 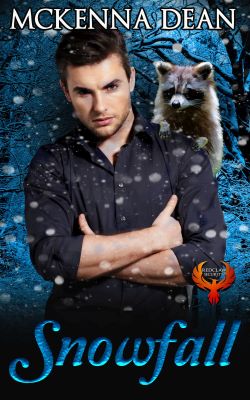 The storm of the century. That’s what the forecasters called it. No problem. Peyton Grant was ready: books, food, wine, and a wood stove. The only thing she could have wished for was a little company. With heavy snow on the way, that was unlikely.

The last thing she expected was to run into celebrity, Nicholas Lang, stuck in a ditch near her house. What could a small-town veterinarian and a movie star have in common? The answer just might make all Peyton’s fantasies come true.

Get Snowfall, free at Amazon

Other books in the Redclaw Security series:
1. The Panther’s Lost Princess
2. Ghost of a Chance