The Adventures of Aislyn O’Sullivan – Chapter 22 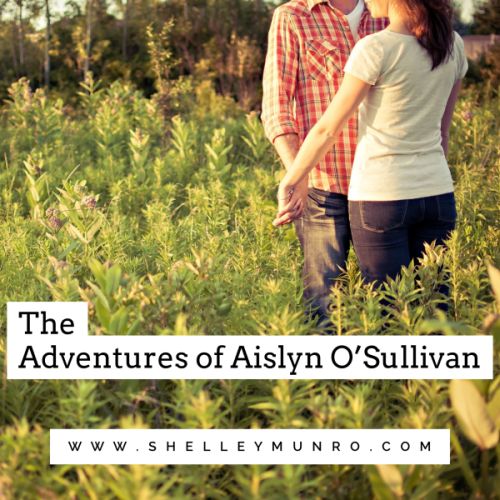 Seamus heard the pounding of feet on the floor outside his office seconds before the door flew open, hitting the wall stop with a dull bump. He stood abruptly, hope surging inside him.

Gary’s chest heaved as he fought for breath. “A man rang the station. Said he saw a young woman who matched the missing person’s report on last night’s news.”

“Did he give a name? Is it Aislyn?” Hell, he didn’t know how he’d survive if they didn’t find her.

“Joe. He told us to search on Kawau Island. He sounded positive it was Aislyn.”

“Let’s go.” Impatience had Seamus heading for the door.

“Use your brain. If Aislyn hasn’t had access to pills, it’s likely she’s shrunk to normal size. Round up a team. Fairy force only. Use the experimental infrared gear the scientists devised for our use. We’ll search on the far end of the island away from Governor Grey’s mansion first. It’s more isolated.” He waited until Gary left and rubbed his right hand across the silver amulet, circling his left bicep. Nothing happened.

“Fuck!” The bloody thing was as dead as a moa bird.

His hand dropped from the amulet in disgust. What was the point of being the Guardian if he couldn’t use magic to save the woman he loved?

Seamus hadn’t realized the island was so big or the vast number of private coves where a boat could land without attracting attention, but he sensed the anonymous tip held truth. Aislyn was somewhere on this island. But where?

One hour lengthened into two. Seamus returned to the designated meeting point. Gradually, the others in the twenty-strong search party drifted back. He surveyed their faces, grim expressions telling of their failure without words.

A cry went up.

“Found her,” a man hollered. He wheezed out his next sentence. “Pure, dumb luck.”

“Where is she?” Seamus grabbed the bag holding the precious medical supplies and sprinted along the beach in the direction the man indicated.

“Over there,” the man shouted after him. “Gary is with her. We’ve found two bodies. One of them looks like Maximillan.”

Ten minutes later, Seamus jogged past a body. It was definitely Maximillan. He didn’t stop until he reached Gary. “Where is she?”

“She’s taken shelter in the drainpipe,” Gary said. “I think she’s alive, but I didn’t want to touch her when she’s fairy size in case I hurt her.”

Seamus’s heart turned over when he peered inside the pipe. She appeared frail and defenseless, her visible skin bright red and covered with blisters. Some of the blisters had burst, weeping clear liquid. A long scratch ran the length of one forearm and her hands… He swallowed. It was a miracle she’d survived. Seamus reached inside the pipe and gently picked her up, cradling her in his palm.

“Gary, make sure the team gets back to the mainland safely. Thank them for their help. Tell them I’ll see them tomorrow.”

Gill ran up to them. “I thought you’d found Aislyn?”

“We have. Gary will explain.”

“I will?” Gary’s dark brows shot upward, incongruous with his red hair. He glanced from Seamus to Gill and back again with something akin to horror. “I will?” he repeated.

“Yeah. Explain what you need to.” He glanced at his best friend. “I’ll talk to you later, Gill.” Seamus focused on the magic humming through his veins. He pictured the hospital in the colony before saying one of the Guardian’s incantations. The displacement of air told him the amulet was working this time. He cupped his hands around Aislyn for protection.

As he shimmered out, he heard Gill’s shocked curse. His surroundings blurred. An instant later, they materialized, both fairy size, inside the colony hospital. Seamus clutched Aislyn to his chest and hollered for a doctor.

Aislyn opened her eyes, aware of the pain throbbing in her ankle and her shoulders. Tight skin and sore lips brought back the heat of the sun, and she wasn’t surprised at the redness of her arms. A sheet covered her while bandages swathed her chest and upper body. Her right hand connected to a drip. She turned her head to see a dark head resting on her mattress.

He held her hand even in a deep sleep.

A flash of movement caught her eye, and a nurse bustled into her room, taking the chart from the end of her bed.

“He’s plain worn out. That worried he’s been about you.”

The Irish in the nurse’s voice made Aislyn want to smile. “Where am I?”

“The colony hospital,” the nurse said. “We’ll have you right in no time. Now that you’re awake, I’ve no doubt you’ll progress in leaps and bounds.”

The nurse grinned. “I’ll get the doctor, but I’ll be taking my time. You’ll have time to say hello before the prodding begins.”

“Hell’s teeth, Aislyn,” Seamus said, squeezing her hand so hard she feared for her circulation. “What did you think you were doing?”

Her cracked lips flattened to a firm line. Nothing had changed.

He swept an agitated hand through his hair, leaving it sticking up in unruly tufts. “Shit, I’m sorry, sweetheart. I didn’t mean to shout. You’ve been unconscious for four days. You scared me. Gary and Gill too. I’ve had to report back to them each day.”

“Yeah. Aislyn, I love you. Please, will you marry me?”

Joy spread through her, then she remembered Renee. She snatched her hand from his touch. “Renee might have something to say about your proposal.”

“Renee and I have called off our betrothal. Please, Aislyn. It’s you I want. I tried to get you out of my head, but I can’t.”

Her mouth fell open. How could she love Seamus? He didn’t even sound happy about his proposal. Honor was everything to him. She understood his attempts to make up for his selfish, weak father, but he shouldn’t take on the load of guilt too.

“I love you,” she said. “I always have, but Seamus, you’re not thinking. What about the colony? You’re the Guardian and me…” She winced at the shard of pain that sliced from her shoulder down her arm. “I’m a rebel, Seamus. The board will never approve of me, and I don’t think I can change, not even for you. Doesn’t the Guardian need to marry for money? I don’t have any.”

He smoothed a forefinger across her cheek, his tenderness making her heart ache. “We’ll get married at Summer Solstice.”

“Stop trying to boss me around and listen to me.”

“You do want to marry me?” A note of panic colored his voice.

“Yes, but I can’t change. If a rule is stupid, the chances are good I’ll ignore it. We’ll end up killing each other. I don’t think it’s right to keep females secluded in the colony. Everyone should have the chance to leave if they want.”

He snorted. “Don’t you mean you refuse to change? You’re the most stubborn female I’ve ever met.” He worked up a glare and failed dismally. “And I wouldn’t have it any other way. You keep me on my toes. What do you say? Will you marry me?”

“That still doesn’t change the fact the colony needs money. I have none.”

“I’m not sure how we’ll fix the colony finances. Nearly losing you made me realize the important things in life, and it sure as hell isn’t anything to do with the colony’s coffers. Do you want to marry me or not?”

He sounded a little pissed now.

“Could we not approach this slowly?” She wanted to give him plenty of time to think this through—the repercussions.

Seamus leaned over her and pressed a gentle kiss to her sunburned lips. “Hell’s teeth, Aislyn. I love you. You can break any damn rule you like, but I warn you, I intend to wear you down. You won’t have the energy to break the rules.”

A grin tugged at her mouth. She tried for meek in the voice department. “If you say so, Seamus.”

“I do.” Seamus rubbed his knuckles across her cheek, sending messages of lust to her brain. His tenderness brought a burst of hope, his smile, an extravaganza of promise and confidence.

“When do you think they’ll let me leave the hospital?” She wanted privacy—lots of privacy with this stubborn, determined male. A thought occurred. “Did you say Gill?”

“He knows about the colony. He saw us disappear and had questions.” Seamus shook his head. “Many questions.”

Aislyn giggled. “Is he okay with keeping it a secret?”

“Soon.” He kissed her forehead while his fingers traced patterns on her palm. “You’ll make an excellent first lady.”

Aislyn gurgled. “I haven’t agreed yet. Have you mentioned it to the board? Murphy?”

Seamus grinned then—a slow, sexy smile that made her stomach jolt. “Not yet. I thought you’d want to be there.”

A chortle escaped her. “You have a wicked streak in you, Seamus Gallagher.”

“It’s you.” Seamus brushed his cheek against hers. “You make me laugh. You keep me honest.” He kissed her with exquisite gentleness. “You make me whole, and I’m not happy without you.”

She still thought they shouldn’t rush into marriage, but this might be one instance where she’d allow him to call the shots. “Did you find Maximillan?”

“Yeah. Do you know what happened?”

“His stepbrother shot him. From what I heard, Maximillan’s assistant Sameth was in league with John Watson, doing a double-cross.”

“We searched Maximillan’s resort three days ago and found the missing kakapo chick.”

“Yeah. That was almost as good as finding you. Summer Solstice. You and me. A wedding.”

“He’s under arrest too, but Sameth eluded us. Definitely a Summer Solstice wedding,” he insisted.

A wave of contentment swept Aislyn as she settled against his chest. Soon, she’d agree, but it wouldn’t hurt to keep her man on his toes. Loving him didn’t mean he could have everything his own way. “I do love you, Seamus.”

His smile was big and full as he wrapped his arms around her, then he kissed her. Aislyn clung, euphoria filling her. Finally, she’d found her place in the world, and she couldn’t wait to learn what came next for her and Seamus.