Eye on the Ball 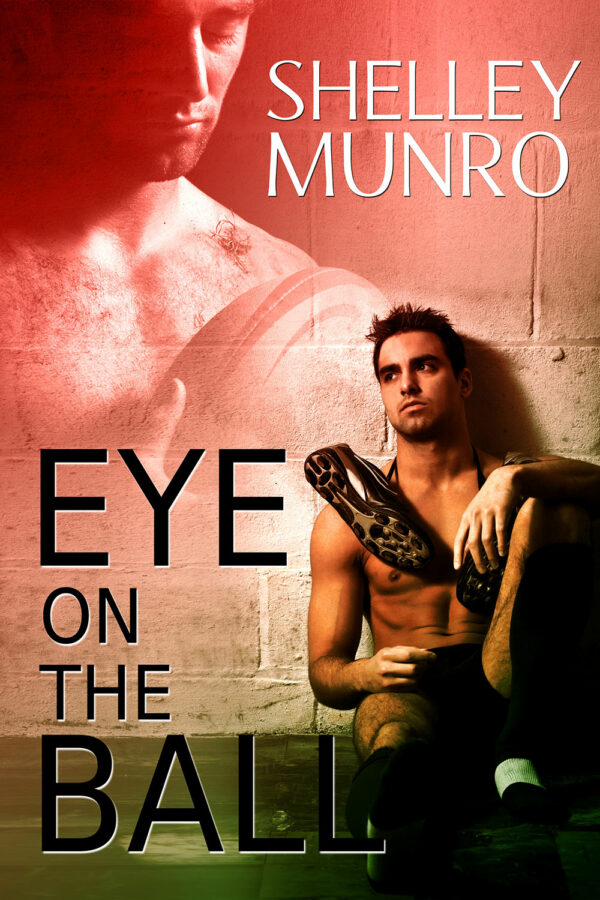 Sometimes the best games are the ones played for keeps.

For two years, Melbourne assistant rugby coach Leon Fleming has mourned the passing of his long-term partner, convinced he could’ve done something to prevent his lover’s unexpected death.

Hunter’s blatant offer shoves Leon into turmoil. It’s only sex, yet it feels as if he’s stepping into the unknown. This is a game with no rules or referee. Not a final whistle in sight, so why is his heart telling him he should play hard and win?

A man didn’t need a friggin’ honeymoon. Leon Fleming scowled at the wall of security camera feeds showing the club action. The lounge and bar area. The small dance floor. The playrooms and dungeons, both public and private. The hookups and posturing. 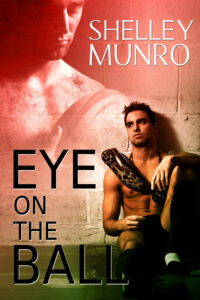 His pissed growl earned him a curious stare from the security guard monitoring the cameras. Leon glared back until the man caved and averted his gaze. Fuck. He backed up to lean against the wall, fighting to tamp down the ragged emotions slapping him around.

Kane is your best friend.

Huh! Easy for his conscience to have an opinion. He was the one stuck in the middle. The reality was much harder, the trip down memory lane ripping scabs off wounds barely healed. Everywhere he looked. Pow! Bam! Mental photographs of a happier time when he didn’t know shit about pain, didn’t believe grief like this existed.

He stirred, pushing away from the wall. Maybe Kane was right, and he needed the comfort of hard, gritty sex, even if the pleasure was fleeting. Physical gratification to take the edge of his temper. Mellow him out.

“Everything looks good.” Leon shoved the words past the lump in his throat. “I’ll go and mingle. Call if you need me.” Even though he wanted to, he couldn’t hide up here the entire night.

He forced his legs to carry him to the door, watched his hand grip the door knob. Somehow, he found himself walking down the set of stairs leading to the lounge. A drink would help to keep the memories at bay. Two or three shots of whisky. It wasn’t as if he intended to play tonight, despite the dull craving for the touch of another human being, skin on skin and the momentary burst of orgasm to blunt the edge of grief.

Jana, Kane’s long-time assistant, grabbed his forearm, dragging him to a halt before he’d taken two steps in the direction of the bar.

Jana huffed out a put-upon sigh and placed her right hand on her leather-clad hip. No-nonsense attitude dripped off her. “Kane always shows them around the club.” Craftiness glinted in her eyes. Determination. Kane had probably warned her, told her to keep on his case and force him out of his funk.

“How late?” A spoiled VIP. Excellent.

“Only half—” She broke off, relief filling her chubby face. “There he is now.”

Leon turned to survey the guest, and an instant flash of rage jolted him. “Last I heard, Little is a member.” What was that bastard Bryan Little doing here?

“Bryan introduced the guest.” Her voice softened as she studied the dark-haired man posing at the entrance to the lounge, waiting for everyone to notice his arrival. “A member always vouches for a guest. Kane’s rules, remember?”

Distaste curled through Leon. Every time he saw Little, he wanted to smack the smugness out of him. Jana had no inkling of the man’s character, hidden under the charming flirtation and good looks. Little might hold long-term membership status, but Leon didn’t like the way he pushed the boundaries with his submissives. Hell, Jason—

He cut off the thought midway. “Why isn’t Bryan giving the tour?”

“Because he’s a member, not part of the club management,” Jana retorted. “You’re standing in for Kane. You need to do the tour.”

Bryan sauntered up to a group men and women, exchanging greetings and kisses. Touchy-feely shit. Irritated, Leon ripped his attention away and got his first glimpse of the VIP.

“Yes,” Jana said in a crisp voice. “At least you have rugby in common.”

“Not necessarily a good thing.” He stared at the tall, powerful man who played rugby for the Auckland Cavaliers. He took half a step forward, something fragile cracking inside him when he realized his first urge was to run his hands over the other man’s broad shoulders. Leon cursed under his breath. What the fuck was wrong with him tonight?

“I’ve placed the usual confidentiality agreement in the induction room.”

Leon froze, not taking his gaze off Blair, aware of the anticipation thrumming through him. Immediately his mind flashed to Jason and familiar pain replaced the alien sensation of lust.

“Boss man, are you listening?”

“Thank you, Jana.” Leon sucked in a deep breath, did the right things to center and calm himself, yet his heart still threatened to bounce right out of his chest. Hunter Blair was a bad boy with a reputation. He liked to party hard, although in fairness, Leon hadn’t read anything in the tabloids this season. What Leon read these days covered Blair’s rugby career, his playing and his current spate of injuries. His poor form.

Leon wove through the crowd loitering near the dance floor, dodging a plump man who flapped his arms in time to the thump of rock music. He skirted the men and women peering down into a scene in one of the dungeons. The faint scent of sweat layered with cologne, whisky and champagne. The beep of a cell phone grabbed Little’s attention as Leon passed, and the man screened the call before replacing his phone in his pocket. All part of the normal club scene.

Leon ignored everyone, his gaze fastening to Blair and clinging until he stood in front of him. “I’m Leon Fleming, the temporary manager. I’ll take you on a tour of the facilities.” He thrust out his hand, his nostrils flaring at the sweet scent of rum. Disgust immediately replaced his intrigue. “You’re drunk.”

“No, I’ve had two beers.” Blair gestured at his black cotton shirt. “Bryan and I stopped at a party before coming here. Some idiot dumped his drink on me. That’s why I stink like a rum distillery.”

Hunter’s gaze met his without dissembling, his Kiwi accent resonating with truth. Some of the tension in Leon’s shoulders eased. Up close the man was even prettier, even more disturbing to Leon’s equilibrium. Short, scrubby facial hair framed his mouth and jaw while brown hair, in need of a cut, fell into messy waves around his head. His blue eyes shone with confidence, and his black shirt and trousers clung, highlighting the fit, muscular body of an athlete.

Leon caught the quirk of Hunter’s lips and realized he was staring. A surge of heat filled his face, and he glanced away, perturbed at his uncharacteristic behavior. “I’ve got a spare T-shirt in my office.”

“Thanks. That would be great.” A lopsided grin lit Hunter’s face, taking it from pretty to striking.

“This way.” Leon stalked away before he made the mistake of touching, the prickling of the hair at the back of his neck telling him Hunter followed on his heels.

Hunter Blair wasn’t what he’d expected, which made him a dangerous man, certainly hazardous to his equilibrium. But, no matter what Kane said, Leon wasn’t gonna have a one-night stand. Wouldn’t happen because he still loved Jason.