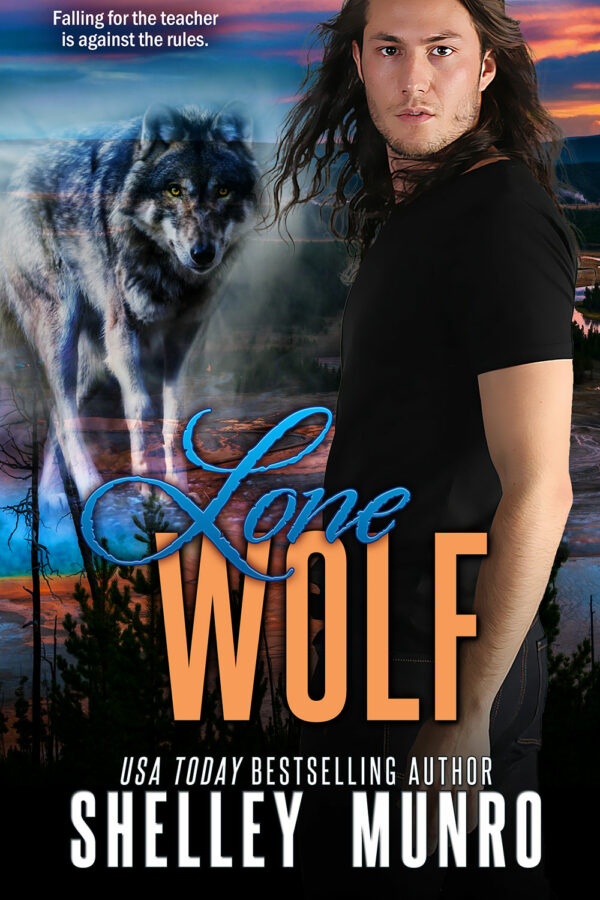 Following your gut instinct, that’s when everything falls into place.

R.J. Blake trains young werewolves in the old ways—giving them a taste of how it was before the introduction of the shift-suppressing drugs that allow their kind to live secretly among humans. He expects nothing out of the ordinary with his new batch of students. Until sexy, smart, aggravating-as-hell Corey Wilson arrives. Older than the others, son of a powerful Los Angeles pack leader, Corey is an instant temptation he cannot afford.

The last thing Corey wants is three months stuck in the Yellowstone wilderness, followed by the stifling life his father has mapped out for him. One glimpse of R.J. though, sparks a determination to seduce the older man before he leaves. Yet as R.J. guides him through the sometimes terrifying process of rediscovering his heritage, a deepening respect calls to his artistic soul and fuels a burst of creativity.

When their time comes to an end, Corey senses hesitation behind R.J.’s insistence that theirs was simply a summer fling. Inspiring him to take a leap of faith with consequences neither of them saw coming. A dangerous plot that reaches from the heart of their love to the highest office in the land…

This book contains a young werewolf intent on seduction, an older werewolf determined to resist said seduction, werewolf politics and brutality, a little spilled blood, and hot, naked manlove in the great outdoors.

One glimpse of the stern man wearing the Yellowstone polo shirt and faded jeans and Corey’s heart, the traitorous organ, jerked into a pitter-patter jig of excitement. Oh, he’d imagined himself in lust before but never like this—a punch to the gut and breath-stealing desire tracking straight to his cock. Despite his stern face and the quickly veiled shock, the guy rated extra hot on the hawt scale. 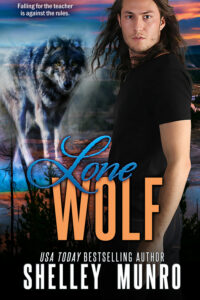 Tall and muscular. His short dark hair showed off the strong planes of his face. Intense gray eyes flashed a sexy glare each time they focused on him. His mouth…well, a set of full lips like his weren’t for mere kissing. They’d stretch perfectly around a cock. Without warning, Corey craved a sight of R.J. on his knees, mouth wrapped around his dick.

Yeah, in the near future he’d make his fantasies real.

After all, a challenge provided a fun way of spicing up life.

He glanced away, intuition telling him the sexy man stared after him. The temptation to twitch his butt pulled at him. He resisted, not wanting to overplay his hand. The anticipation of the chase was part of the fun. There’d be plenty of time for seduction since his parents’ wishes put him in this no-town dump for the next three months.

A scowl burst to life at the reminder. Who the hell wanted to run around in a fur coat anyway? The memory of the pain and sheer savagery of shifting to wolf form brought a shudder of horror. Shoving the past away, he boarded the yellow bus and took possession of an empty seat. He’d noticed the others on the plane.

They’d taken one peek at him and judged by appearance, deeming his Goth makeup and apparel weird. A couple of the girls had treated him as if he carried cooties. A huff of contempt layered with humor escaped. Little did they know they were safe from his lecherous ways.

The males—now that was another matter entirely.

Park Ranger Cutie stowed the last of the bags in the compartment at the rear of the bus. From where he sat, Corey watched him surreptitiously, appreciating the smooth flex and bulge of biceps each time he hefted a bag from the luggage trolley. Giggling from two of the girls told Corey he wasn’t the sole audience of this show. The girls were out of luck, however, because judging by the flicker of awareness he’d witnessed earlier, he stood a better chance of scoring. If he wasn’t mistaken, Park Ranger Cutie preferred men, which suited Corey fine.

An older man boarded the bus, clipboard in hand. Park Ranger Cutie took possession of the driver’s seat.
“Welcome to Yellowstone. I’m Hal Price-Jones, the director of the summer program. R.J. Blake here is our driver. He’s my second-in-command and the person you’ll come into contact with most on a day-to-day basis. We’ll have a meeting tonight after dinner where R.J. and I will go through the rules and schedule. Our program will start officially tomorrow.”

R.J. Blake lifted a hand in acknowledgment and turned away to start the bus. Corey pulled his sunglasses from his shirt pocket, placed them on and sprawled back in his seat. Most people would assume him asleep and leave him alone.

His thoughts drifted. Nine months ago his parents had informed him he’d spend his summer in Yellowstone. They expected him to ignore his art and learn to turn furry, enabling them to concentrate on consolidation with a neighboring pack. He’d tried objecting, promising to keep a low profile. His father said he was a smart-ass and he didn’t trust him to behave in a manner befitting a pack leader’s son. The consolidation was important and nothing could derail the talks. Nothing.

When calm reasoning failed, Corey had rebelled worse than usual. During full moon, when the call to shift pulled stronger than normal, his rage at his father’s edicts fucked with his control. The infallible suppression drugs failed to hold him to human form and he’d partially shifted.

Corey fidgeted on the hard seat. Sweat beaded on his brow as his mind skittered through the terror again. The scrunching sounds. The musky scent of wolf. The agony when his bones and muscles warred with his mind. His gut roiled, the memories pounding him like a giant metal mallet. No wonder he lacked enthusiasm for this Yellowstone experience. Each nightmare replayed the shitload of pain.

Bad enough hiding in the gay closet, but having a resident wolf writhing inside him sucked great big donkey’s balls.

Someone tapped him on the back. Corey ignored the interruption until the person grasped his shoulder and yanked insistently.

“What do you want?” Corey demanded.

“Aren’t you looking forward to the next three months?” a breathless feminine voice asked.

Great. Just great. “I didn’t want to come. My father decided to send me here in punishment.” Corey opened his eyes, part of him curious. His appearance normally put off people.

“Ooh, what did you do?” The breathless voice belonged to a vivacious blonde. Her clothes screamed popular cheerleader. Perkiness seeped out of her pores in puke-inducing waves.

“Did you break a pack law? Why is your father punishing you? All my friends applied to attend. They were pissed when they missed out.” Her redhead friend sat beside her like a matching bookend, apart from the hair color.

Corey inspected his fingernails for chipped polish before deigning to reply. Not too bad. The nail polish cost heaps but possessed great staying power. “According to my father, I’m an embarrassment.”

The two cheerleaders leaned forward, their blue eyes rounding in fascination. “Why? What did you do?”

“I like art. My father thinks it’s sissy.” Luckily none of the pack was aware of his preference for the male sex. The discovery would likely get him kicked out of the pack. The two teens craned forward even farther.

Most guys would have taken the opportunity to peer down their blouses. Corey wasn’t that guy. “Also I don’t play nice.” He peeled back his lips to display sharp teeth. “I eat little girls like you for dinner.”

“That’s what we thought,” the blonde whispered, glancing over her shoulder to learn if any of the others were eavesdropping.

Corey rolled his eyes. The drugs didn’t kill their senses, merely muted them and stole their ability to shift.
They were frickin’ werewolves. Of course they were listening.

“We’re best friends.” She lowered her voice. “We do everything together. Everything.” She blew him a kiss while her redhead friend winked at him.

“Are you okay?” one of the girls asked.

“I’ll open the window,” one of the girls said. “The fresh air always helps me.”

“Thanks.” Finally his wolf subsided, and wrung out, Corey slumped lower on the seat.

“Yeah. Thanks.” What the hell would happen once he stopped taking the drugs? The possible answers scared him.

His father really would disown him if he caused the pack embarrassment, and his problems would increase because the drugs didn’t stop wolves craving the company of like. No matter how much he fought the desire, eventually his inner wolf drove him crazy and he had to return to visit his parents and the rest of the pack. A sort of a recharge because his wolf only rested easy when he had frequent contact with other werewolves.

“So what do you think?” Both girls beamed at him, fluttering their eyelashes in well rehearsed flirtation.

“I’ll keep your offer in mind.” Heck no. Never. Corey wouldn’t touch them even if they paraded naked in front of him. The warning on the director’s face when he glowered over his shoulder at them proved unnecessary. “I’m tired. I’m going to sleep.” He turned away and pretended to nap. Art. He needed to concentrate on his artwork because if he didn’t, his wolf would push him again, despite the suppression pills.

Gah! How the heck was he gonna survive the next three months? 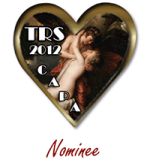 “I’m hoping to see further books in this world, because I liked both Corey and RJ and found their world fascinating.” ~ Joyfully Reviewed

“Lone Wolf is a fast-paced story with a nice mix of action and romance. With many likable characters as well as cruel villains the reader is kept on the edge of their seat as the story races to its conclusion. Readers of the paranormal will find much to enjoy in this story while hoping for a continuation of its intriguing points.” ~ Words of Wisdom…from the Scarf Princess

“This was a pleasant read, a step up from the average werewolf serial novel. Shelley Munro has created an interesting line with her werewolf society, taking the usual hierarchical elements to an authoritarian and restrictive level.” ~ Reviews by Jessewave

“Lone Wolf is a suspenseful and dramatic story of two men who fall in love even though the truth could tear them apart. It shows that opposites do attract and love doesn’t recognize werewolf-made boundaries and unnatural measures that try to stop nature. It’s a well thought out and crafted tale that balances sexy hotness for the heart with suspenseful intrigue for the mind.” ~ Whipped Cream Reviews

“If you like werewolf stories in a realistic setting, if politics are part of what makes the world real for you, and if two men struggling to find and then accept love is something you want to read about, you may like this book as much as I did. As far as I am concerned, the sequel cannot come fast enough!” ~ Queer Magazine Online

“Shelley Munro has written a well-paced book with engaging characters and a satisfying ending.” ~ The Romance Studio.