Lynx to the Pharaoh 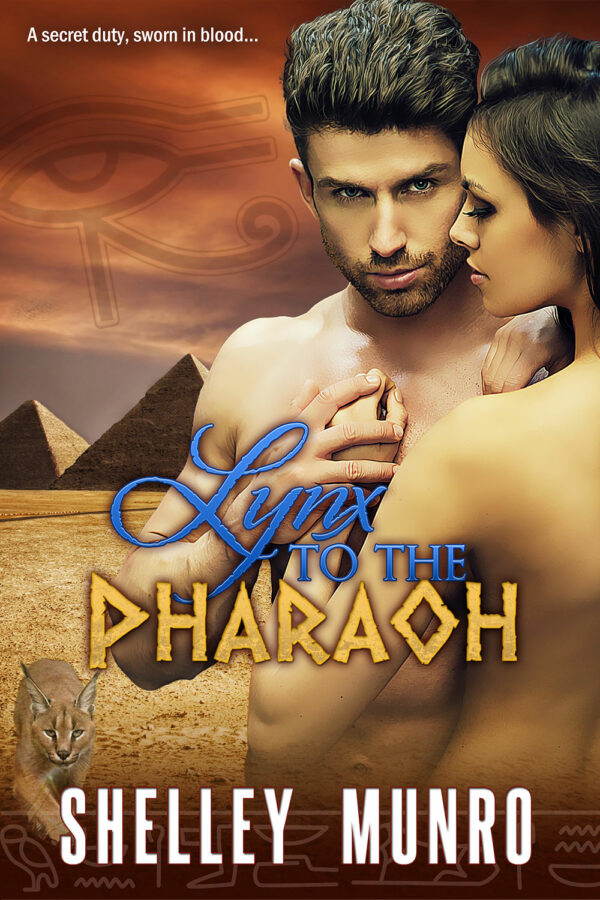 Sethmet Khalil comes from a line of shapeshifters who protect the pharaoh from tomb robbers. It’s a sacred duty handed down from father to son—a duty he’s determined to carry out successfully so his family retain the shapeshifter powers they cherish. Failure means death at the hands of a deadly curse.

Desperate to escape the strictures of mourning, Charlotte Webster travels to Egypt with her stepbrother. The freedom of Patria Oasis is heady after the stuffy rules of the London season. It’s full of temptation. Sethmet, their guide, is handsome and sparks forbidden desire in Charlotte. Risking censure, she embarks on a passionate affair, secret rendezvous full of lingering caresses and explosive pleasure.

Charlotte pleases both man and feline, but she’s with the men Sethmet suspects are hunting for the pharaoh’s treasure. If Charlotte is involved, he can’t protect her from the pharaoh’s curse and she’ll die with the others. Love, danger and betrayal battle beneath the blood-red desert moon as the lovers steal moments together and fate works its wiles.

Charlotte blinked up at the large man who’d woken her. Nervous because of the way he towered over her, she scrambled to her feet. Sudden shooting pins and needles in legs cramped from staying in one place made her wobble precariously and cry out loud. The man moved so quick she didn’t register until her hand tightened around his forearm. Warm skin greeted her touch along with a shudder of awareness at his stark masculinity. Now here was a man who could tempt her. Maybe, just maybe…

He was tall and lean with a build hinting at muscles beneath the fabric of his clothing. His dark, curly hair framed his head, unruly enough that she had the urge to smooth it with her hands and tug long strands from his queue. In fact, she acknowledged to herself her hands itched to stroke more than his hair. How odd! Charlotte jerked up her chin, wary yet enthralled by the striking stranger. It took her an instant longer to release the man’s arm.

“I must have fallen asleep,” she said, uneasy suddenly with the intimacy of the cave and the glow she could see in his tawny eyes.

What was wrong with her? After George’s death, she didn’t want to marry again. The experience had left her wanting and confused about why women sought marriage. She intended to remain a widow for the rest of her days.

“I need to return to camp before my stepbrother starts to worry.” Or loses his temper with me. Charlotte wrinkled her nose at that thought. William’s temperament hovered in uncertain territory these days, and his wrath was a sight to make a grown man or woman tremble. She didn’t want to raise his ire. All the more reason to hurry back to camp.

“Let me escort you back.” The stranger paused to smile and offer his arm. The flash of even white teeth pushed her awareness of his raw sexuality even higher, and nerves skittered through her. She felt unaccountably jumpy. But not frightened, she realized in puzzlement. How peculiar this strange sensation was…

“Your brother has hired me as a guide. I am Sethmet Khalil.”

“Our guide?” Charlotte snapped her mouth shut when she heard herself parrot the man.

“That’s right.” He glanced down at his arm then back at her. One dark brow rose in silent mockery and Charlotte realized she’d been staring. Her gaze shot to her half boots before she extended her hand and placed it on the hard sinews of his forearm.

They strolled across the sand and rock floor of the cave as though they paraded in one of London’s finest ballrooms.

“What made you decide to travel to Egypt?” he asked.

Charlotte paused and found herself wanting to tell the truth. “My husband died eight months ago. I wanted to have a break from London.” A break from the sympathetic tabbies and the puckered brows when she so much as spoke to an unmarried man.

Charlotte wondered what he meant by that since his face didn’t yield a clue. The silence between them intensified. Charlotte swallowed and fought to think of suitable chitchat to fill the void. Aware of the social chasm between them yet desperately wanting to breach it, she blurted, “I saw a cat last night.”

He paused inside the mouth of the cave and looked down at her with an impassive expression. The seconds dragged out.

“It was beautiful,” Charlotte said, recalling the proud and sleek creature standing in the light of her lamp.

“Are you sure? There are no footprints out here.”

His voice was low, husky and it strummed along her nerve endings. Charlotte shivered when a picture formed in her mind. A naked man and woman rubbing their bodies against each other. A small gasp of shock emerged when she recognized their faces. His—Sethmet’s—and hers. Heat pooled in her cheeks while nerves danced in the pit of her stomach. This was so unlike her, yet she couldn’t rid her mind of the truth. She wanted him to touch her, to remove her clothes and stroke her body. She wanted him sexually. The realization stunned her since intimacy with her late husband George had been anything but inspiring. Certainly nothing more than duty and the need to produce an heir. Charlotte inhaled sharply and struggled to regroup. It was fatigue, that’s all.

He grinned without warning. “Call me Sethmet.” The accented words underscored his amusement.

“I am Charlotte.” It seemed pointless to keep to formalities when she was so far from home. And with the way her mind kept drifting to intimacies featuring this man. “Lady Charlotte Webster.”

“Lady Charlotte.” Sethmet rolled her name, making it sound unusual. Exotic. “Come. It is early still. No one stirs in your camp. Would you like to watch the birds on the oasis and break your fast with me?” He indicated the basket he held in his other hand.

“How do you know I am staying at the camp?”

“A process of deduction since no Englishwoman has arrived with the camel trains during recent weeks. I would have heard the gossip at the caravanserai.”

“Of course.” Uncertainty made her pause. “I’m not sure I should go with you.”

“I do not intend you harm,” he said gravely.

But he wanted to kiss her, she thought. Touch her. The knowledge shimmered between them like a splendid secret.

Uncertain but tempted, she exited the cave at his side. Ribbons of color streaked the morning sky, a faint splash of orange and a deep pink. Charlotte sighed, feeling more at home in this foreign place than she’d ever felt amongst society in London. She strolled over the uneven rocks, conscious of the flex of muscles in his arm and the brush of his trousers against her skirt. She shot a quick glance in his direction and discovered he was watching her with distinct interest and speculation. Temptation slithered through her and made her feel sympathy for Eve facing the apple. Seductive temptation indeed.

“Can we go past the camp first?” Maybe that would be best. Safer.

“If it would put your mind at rest.”

Charlotte shook her head, aware she didn’t want to do the right thing. She didn’t know the man, and yet it didn’t seem to matter. Instinctively she trusted him.

They slid down a short rocky slope and rounded the base of a dune. In the distance, the canvas tents were visible, framed against another sand dune. A faint plume of smoke rose, indicating the native cooks were awake and preparing for the day. If she returned now she’d have to go to her tent. It seemed a shame to waste such a beautiful morning. What her brother didn’t know wouldn’t hurt him…