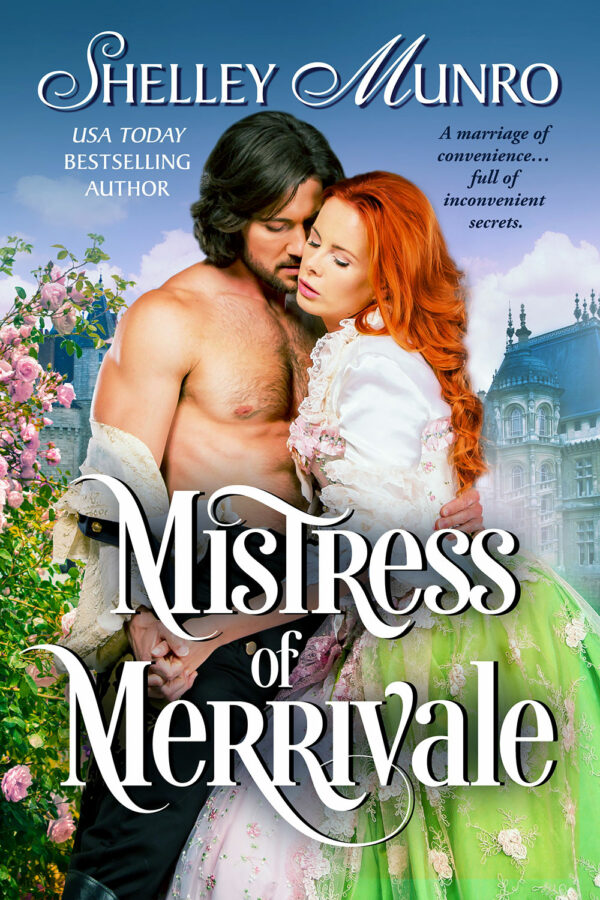 A marriage of convenience…full of inconvenient secrets.

Jocelyn Townsend’s life as a courtesan bears no resemblance to the life she envisioned in girlish dreams. But it allows her and her eccentric mother to live in relative security—until her protector marries and no longer requires her services.

Desperate to find a new benefactor, one kind enough to accept her mother’s increasingly mad flights of fancy, Jocelyn is nearly overwhelmed with uncertainty when a lifeline comes from an unexpected source.

Leo Sherbourne’s requirements for a wife are few. She must mother his young daughter, run his household, and warm his bed. All in a calm, dignified manner with a full measure of common sense. After his late wife’s histrionics and infidelity, he craves a simpler, quieter life.

As they embark on their arrangement, Leo and Jocelyn discover an attraction that heats their bedroom and a mutual admiration that warms their days. But it isn’t long before gossip regarding the fate of Leo’s first wife, and his frequent, unexplained absences, make Jocelyn wonder if the secrets of Merrivale Manor are rooted in murder…

Warning: Contains mysterious incidents, a mad mother who screeches without provocation, scheming relatives, and a captivating husband who blows scorching hot and suspiciously cold. All is not as it seems…and isn’t that delicious? 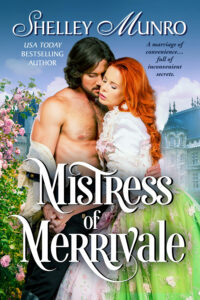 “M-married?” Jocelyn Townsend clamped her hands in her lap and frantically sought the right words for the occasion. “Congratulations.”

Tobias Sherbourne, the Earl of Melburn, beamed. Happiness lit his craggy face, taking it from ordinary to compelling. His eyes sparkled, the bright blue emphasized by his snowy white wig. “I’ve offered for the Neville girl.”

“I wish you happy, Melburn.” Jocelyn’s spine pressed against the back of the damask sofa, the squeeze of her stays grounding her again. Gossip and rumors had circulated for months now. Yes, she’d known Melburn’s declaration would come, but hearing it still hurled her into panic. She wanted to vent her frustration for everyone to witness, but of course, she didn’t. Her mother was the only person who shrieked in this household.

She picked up the teapot. “Tea? Or would you prefer something stronger?”

“Brandy, please.” Melburn straightened from his casual lean against the mantle.

A raucous feminine screech pierced the air and tea sloshed from the spout. Jocelyn sighed inwardly, forcing her smile to remain intact while she set the china pot down. Not again. “Perhaps we would both benefit from something stronger.”

She rose and maneuvered her skirts around her mahogany table and a square-backed chair to ring for a maid. The high-pitch scream repeated, louder and closer to the parlor. Jocelyn flinched, shooting a pained look at the closed door.

On her return, Melburn took possession of the seat opposite her, his large frame dwarfing the delicate furniture. “How is your mother?”

One would think the ear-piercing shrieks were nothing out of the ordinary, given his calm demeanor but, after two years as her protector, her mother’s peculiarities no longer disturbed him.

A maid appeared, and Jocelyn relayed her request for a bottle of brandy and two glasses. It mightn’t be the thing for a woman to drink strong spirits, yet if ever there was a time for her to imbibe, it was tonight. The maid’s face blanked, although she curtseyed in acquiescence and hurried off to complete her errand.

“My mother is having a bad turn. She insists someone is watching the house and spying on us.” It was a relief to share the latest drama with Melburn.

“Have you investigated to allay her concerns?”

Jocelyn resisted the urge to roll her eyes. “We have been more vigilant than usual. I haven’t noticed anyone suspicious and neither has Woodley or Tilly, but Mother is steadfast in her charges.”

Her butler and her mother’s nurse were equally adamant no one lurked in the alley outside their Cork Street house. While it wasn’t the best location in London, a night watchman patrolled the surrounding streets, and lamps chased away most of the gloomy shadows once evening fell.

The maid returned with a tray bearing the requested brandy.

“Would you like to adjourn to the bedroom, Melburn?”

Jocelyn leaned closer and covered his hand with hers, halting his refusal. “It’s a love match. I understand.” His bergamot and spice scent washed over her, familiar and comforting. He was a good man and a spurt of envy chased through her. Silently, she acknowledged her loss and the difficulties she’d experience in finding another protector of his caliber—someone she could trust not to abuse her.

“Ashleigh is a wonderful woman. I wouldn’t see her hurt by spiteful gossip.”

“I’d expect nothing less from you. It was a lucky day for me when you won me from Boynton.” And even better he’d become a friend as well as her lover.

Melburn’s eyes narrowed. “The man is a brute. The minute I saw the bruise on your cheek, my course of action was clear. Besides”—the tension in his upper body eased—“I like your red hair.” He reached over to tug on an unfashionable red ringlet, grinning at her like an errant boy.

“Thank you.” Her words acknowledged far more than the compliment. He’d rescued her from a bad situation and, for that, she’d always be grateful. She poured a measure of brandy and handed it to him before taking a smaller portion for herself. An abrupt ear-piercing shriek right outside the parlor made her wince. “Perhaps I should attend to my mother.”

Melburn set his glass on the mahogany table. “Let me. I’ll take a lantern and check outside in the alley. Help set her mind to rest.”

Reality crashed over Jocelyn as she watched him stride from the parlor and disappear into the hall, the door shutting behind him. This really was the end of their relationship. She’d miss his caring ways and passionate lovemaking. The Neville girl was lucky, and Jocelyn tamped down her envy. She fingered her gold locket and fought her growing agitation. A shiver crawled down her spine when she considered a search for a new protector.

No one could call her beautiful, and the last thing she wanted was to make another mistake, yet time would be of the essence because living in London was expensive. She was certain Melburn would give her a parting gift, yet even so, she’d have to tighten her purse strings until she found a suitable replacement.

The rise and fall of an emotional diatribe pierced the door. Jocelyn sipped her brandy and pulled a face at the harsh bite. At least the burn pierced the chill inhabiting her body. Her mother’s crying ceased, and a reassuring masculine voice filled the silence. She couldn’t decipher the words but knew Melburn would offer comfort. It was his way. The respite allowed Jocelyn to ponder her predicament. Even if she located a protector, finding one who accepted her mother’s presence would prove nigh on impossible.

She could approach her sisters… No, Georgina and Charlotte barely acknowledged her these days. They wanted to send their mother to Bedlam. Jocelyn hated to think of her one remaining parent incarcerated in the hospital, treated like an entertaining exhibit for those who possessed the price of admission. Her mind raced, attempting to fashion a workable solution. She drank more brandy, allowing the spirit to chase away her growing disquiet.

Ten minutes later, the door opened, and the earl entered the parlor. His cheeks were ruddy from the nippy spring evening.

“Did you discover anything unusual?” Jocelyn asked.

“Not apart from an old tomcat lurking in the alley. I informed your mother of my findings.” He sent her a rueful grin. “She decided she’d scared the spy away with her warning cries.”

“Thank you.” Another burst of fancy on her mother’s part.

Melburn sat again, a man with something on his mind, given the way he darted a searching look at her and toyed with his brandy. “What will you do now?”

“I don’t know. I suppose I’ll look for your replacement.” She pulled a face, then let him know she bore no malice by adding a smile. After all, their involvement was basically a business proposition. She’d offered the use of her body in exchange for his financial support. The easy camaraderie between them had come as a bonus. “It won’t be easy to find someone who suits my situation.”

“I might have an answer to your problem.” He hesitated as if he was unsure about his solution.

“Tell me. I’d like to think we’re at least friends after all this time.”

Melburn paused a fraction longer before appearing to come to a decision. “My cousin, Leo Sherbourne, requires a wife.”

A shocked gasp escaped her. “But I’m a courtesan. I—”

“You’re not a courtesan by choice.”

“Think about it. Marrying Leo would give you an opportunity to start afresh.”

Most men wanted to distance themselves from their ex-mistresses. Jocelyn frowned at his quiet insistence, questions flying through her mind. “I see the benefits for me, but what about your cousin? What does he gain from such a match? Why would you want me to join your family? What if your betrothed learns of our shared history?”

“Leo lost his wife last year. He has a daughter, and he finds himself in want of a wife.”

Jocelyn’s brows rose. “Surely he could hire a nursemaid?”

“There are unusual circumstances that make a wife the better solution.”

“What unusual circumstances?” Jocelyn wasn’t sure she liked
Melburn thrusting her into the middle of a mystery. “How can I make a decision if you don’t give me the full facts?”

“Jocelyn, it’s not my story to tell. I’m merely acting as Leo’s agent in this matter, gauging a sense of your interest. What I can tell you is that my cousin is a good man. He’s trustworthy. He won’t beat or degrade you.”

The chance of a new start wasn’t something that occurred every day. “What about my mother? Where does your cousin live?”

“Leo knows of your situation.”

“That wasn’t what I meant. Is your cousin willing to give my mother his protection?”

“He wants to meet with you tomorrow morning,” Melburn said. “If you’re agreeable, you can ask your questions then.”

Jocelyn drank the last of her brandy and set her glass aside. She laughed lightly. “Very well, you wretched man. You’ve piqued my interest with your suggestion, and you know it. I’ll meet with your cousin here at eleven tomorrow morning.”