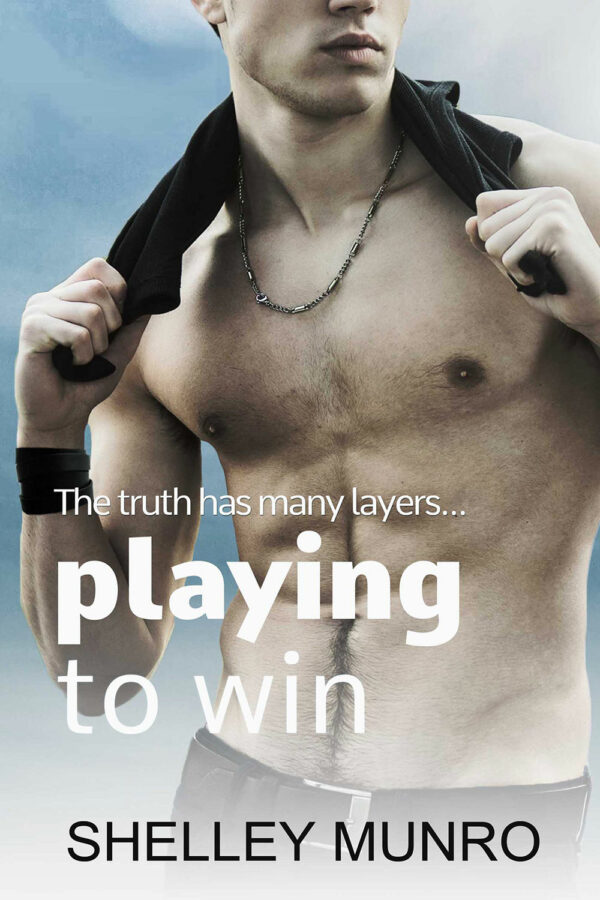 The truth has many layers…

Professional rugby player, Lane Gerrard is used to women throwing themselves at him, but a scurrilous tabloid article naming him as father of a child sends his temper soaring. The woman he confronts doesn’t fit the blackmailer profile. Kate Alexander is attractive with an enchanting innocence, enticing. A total stranger. Her feistiness draws his unwilling admiration, but the child…he is the image of Lane.

Kate can’t deny her son’s similarity to the sexy man at her door but no way will she hand him over without a fight. Kate doesn’t possess money but she can shower her son with love. With public speculation rife, Kate reluctantly works with Lane to discover the truth. They grow closer as distrust slowly turns to mutual fascination, but the tabloid articles bring out a stalker. Mild pranks escalate into danger, and suddenly Lane realizes Kate is a woman he could love. With Kate and her son, he could have a family. Now, with his heart on the line, this is one game he’s playing to win…

Kate jerked the door open. “Jamie, what…?” Her words trailed off when she came face to face with a stranger. Tall, he loomed over her, his dark hair and tetchy expression reminding her of a thundercloud. Admittedly, a very sexy one. She gaped at the enigmatic man trying to read him, for some unknown reason fascinated with learning what had ruffled his day. “Can I help you?” 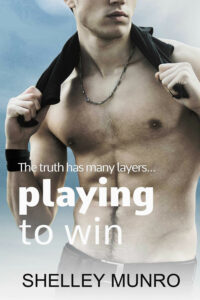 The impassive mask slipped momentarily and she read the flush of displeasure high on his cheekbones, in his glittering eyes. Tightly leashed emotion radiated from him in waves and alarm seeped through her. Kate shifted uneasily before common sense told her to stop being stupid. Help was a call away. Still, as his broad shoulders angled closer, she inched backward, pleased Adam was still here. Her slow retreat didn’t go unnoticed. The hard planes of the man’s face tightened and he observed her closely like a predator stalking prey. Pewter-gray eyes fixed her with cool speculation then, just like a light switching off, his face blanked.

Her skin tingled under the scrutiny, and to her chagrin, the sensation wasn’t entirely nerves. The sexy thundercloud thing. She shuffled her feet again, barely resisting the urge to check the buttons on her cream blouse were correctly fastened. Adam would make an appearance soon. She hoped. Heck, if she reacted to a grumpy stranger like this, celibacy was definitely doing something weird to her hormones. Dark, rich chocolate had worked as a sexual substitute in the past. She’d grab a chocolate bar from the pantry the minute the man left.

Kate conducted a quick, edgy survey of her own. He appeared well-groomed, wearing an expensive suit that probably cost more than she earned in a month. She was positive she’d never seen him before. The man would make a lasting impression with most people. He bore an innate charisma, not traditionally handsome or striking like Adam, but intensely masculine. His powerful build coupled with strong, dark features demanded attention, but it was the mesmerizing gray eyes surrounded by lush lashes that would make a woman take a second look. And long to run her fingers through his silky hair. Her survey swept his body from top to bottom and back again.

Oops. Her mouth dropped open when her gaze collided with a cool gray one. Piercing eyes shot salvos of exasperation at her, as if he were impatient to complete an unpleasant chore. Kate racked her brain trying to work out why he was here demanding entrance, wrinkling her brow in concentration. Maybe he had the wrong house?

Kate’s heart sank. Not the wrong house after all. And why would it be? Every thing about him radiated self-assurance. For a brief moment, she considered shutting the door in his arrogant face, but a speculative glance at the muscled shoulders filling out his charcoal-colored designer suit changed her mind. Not a viable option. Kate sensed he didn’t intend to leave until he’d gained exactly what he wanted. Whatever that was.

“I’m Kate Alexander,” she admitted with a touch of caution.

His brows rose and she could have sworn she’d surprised him, but of course, he recovered quickly. “Can I come in?” he asked, moving toward her as he made his request.

Kate planted her size six feet in the middle of her doorway and stood her ground. She wanted information first, before she let him inside. A name would make a good start. Men who used their superior strength to pummel whatever they wanted from life didn’t win points with her. With Steve, her ex-fiancé, she had accepted it as normal, but no longer. No one pushed her around.

“Will I be able to stop you?” she asked in pointed reference to his muscular bulk bearing down on her. He pulled up short. A brief spurt of puzzlement sprinted over his tanned face, his dark brows drawing together in a frown. Kate watched with fascination when a faint wash of embarrassment appeared high on his cheekbones. Not so uncivilized after all.

“Sorry,” he muttered, stepping back.

Kate exhaled in satisfaction, feeling she’d wrested back control of sorts. “Your name?”

Discomfort faded from his face, his eyes narrowed into a withering glare. “So that’s how you’re going to play it? Deny you know me and protest your innocence?”

His mouth opened as if he intended to fire a further volley, but the shriek of car brakes at the end of Kate’s driveway drew their attention. A dark blue sedan fishtailed to a stop at the curb, the stench of rubber heavy in the air.

The man standing beside her stiffened noticeably. He dragged a hand through his short dark hair and spat out a pithy curse. “Hell, I thought I’d beat the vultures.”

Kate didn’t need to pretend confusion. She darted a glance at the stranger and decided from the ominous look on his face he knew exactly what was happening. She wished he’d enlighten her. Like a film extra caught in the wrong movie scene, she felt utterly bewildered.

An electric window wound down with a distinctive whine. Goodness! Was that a camera pointing at her? She blinked and looked again. It was.

“Inside,” the man snapped. “Before they get a photo.”

Kate blocked the doorway. Was he mad? She didn’t intend to let him inside. “No. Not until you tell me what’s going on.”

The photographer zoomed his lens in on them. Below the camera that covered most of his face, a slick smile bloomed as he feverishly clicked the shutter button.

Kate’s gaze snapped to the grim-faced man at her side. “Who are they? What are they doing?”

The stranger took two menacing steps toward the parked car. His sheer size was enough to strike fear, but Kate decided his scowling face set the seal on the photographer’s decision to retreat. He pulled his camera to safety and leaned forward to speak to the driver. His panicked words were loud enough to reach Kate.

Wheels spun and gravel sprayed when the sedan shot off, but once the vehicle was at a safe distance, the driver braked to a screeching halt. He stuck his blond head out the window, an insolent sneer distorting his mouth. “Thanks, Lane. Look for it tomorrow.”

The photographer gave a jaunty wave, a leer on his weasel-like face, and then the car sped away.

Kate stared after the departing vehicle, tongue-tied in astonishment. Hands clamped on her shoulders and propelled her into the coolness of the foyer. The door slammed behind them, making her realize they were alone. A pregnant silence hummed between them, highlighting several things, including the fact she hadn’t been out on a date for ages. Kate gulped, averted her gaze before peeking at him again. Oh, yeah. She needed that chocolate. The mystery man’s tanned face remained expressionless apart from his eyes. They smoldered with suppressed tension.

“Shelley Munro weaves a wonderful tale in Playing to Win, interspersing the romance between everything else that is happening around Lane and Kate. Lane wants to have a relationship with Kate and a family and, with his heart on the line, this is one game that he’s playing to win. You can’t help but fall in love with this couple as the warm and tender love story plays out. Fans of Ms Munro will love this book and will want to add it to their collection.”
~ Literary Nymphs

” Playing to Win has an edge-of –your- seat plot. I was hooked from the first chapter. This book has twists and turns that keep the reader guessing. The characters are well defined with their own voice. Shelley Munro is a talented author. Fans of romance, do not let this one escape your bookshelf.”
~ ReviewYourBook.com

“I’m not sure what I expected from Playing to Win, but it certainly wasn’t the deep emotionally engaging story I got……Ms. Munro weaves the different emotions and situations with ease and before you know it you’re at the end of the book. Besides being emotionally deep, Playing to Win builds to a suspenseful moment that left me breathless. The tension in the story builds with each page you turn, and I found myself trying to work out the truth as well as the identity of the person stalking Kate. However, Ms. Munro kept me guessing until the end. I’m not sure what was more nerve-racking, the sexual tension, the mystery of Jamie’s father or the stalker. All the secondary characters add depth, and Ms. Munro brings them to life brilliantly. If you’re after a book that engages on all levels, you can’t go past Playing to Win by Shelley Munro.”
~ Fallen Angel Reviews

“I highly recommend Playing to Win for both the intense suspense and drama, the well-developed characters, the hot loving and an HEA that will satisfy any romance reader. It has it all. 5 cherries.”
~ Whipped Cream