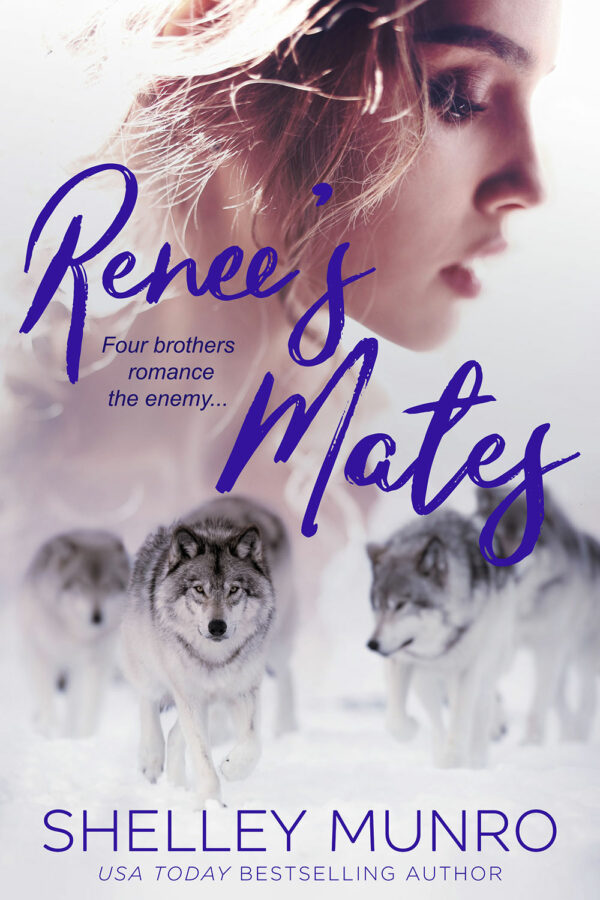 Soldier Renee Paulson and her best friend witnessed a murder. When her friend dies in suspicious circumstances, Renee flees to a secluded town. A helicopter pilot, she flies tourists over the tundra and delivers supplies while keeping a low profile.

Like most werewolves, the Taktuq brothers are family oriented. Their younger sister is adamant Renee had an affair with her soldier husband, and they promise to investigate. Exhaustive research leads them to the Arctic town of Churchill. Renee Paulson or Renee James, the name she goes by now, is a sexy surprise. She’s solitary and wary, and it seems she is their mate. Perturbed, the brothers push on with wooing and romance while conflicted by their obligation to their sister. Peeling away Renee’s protective layers reveals a desirable, intelligent woman—one they wish to keep in their lives.

When an assassin catches up with Renee, the Taktuq brothers embrace their wolves to save her. They’ll do anything to guard their mate, even protect her from their sister.

Contains a strong, plain-Jane heroine, four werewolf heroes with attitude, lots of secret sexy times, a pissed younger sister and an assassin with a big gun. 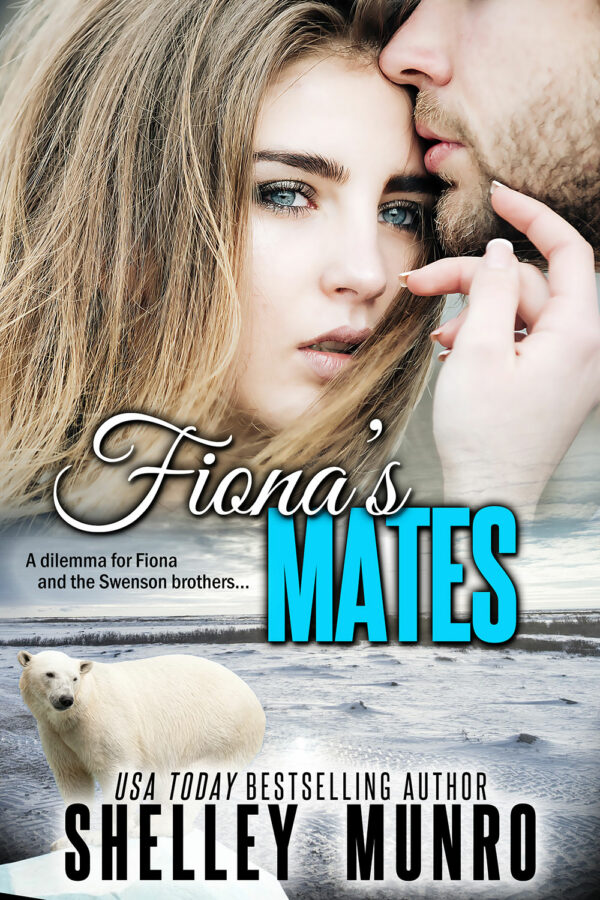 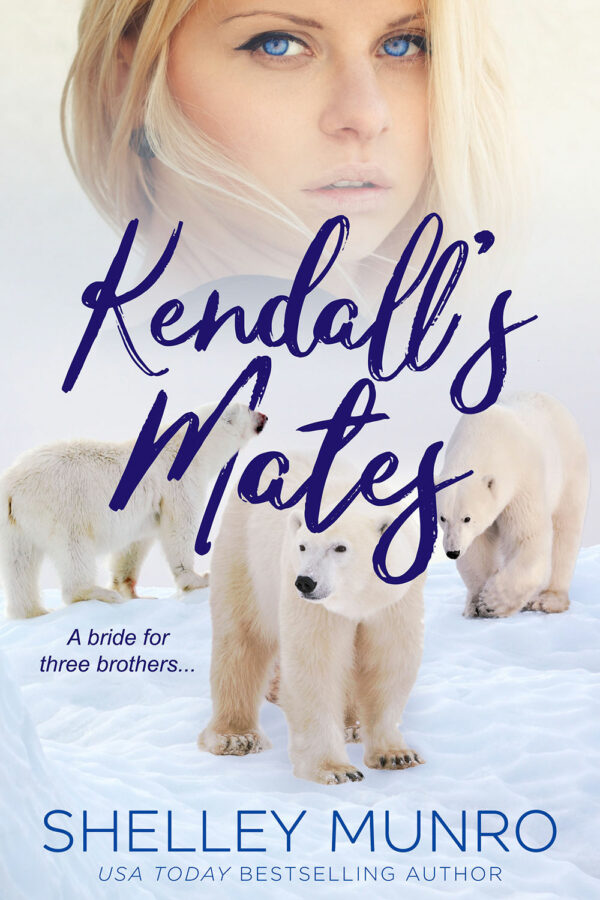 “What’s up, Misty?” Calian Taktuq entered their sister’s beach-side house in a suburb of Los Angeles. He was the oldest of the Taktuq siblings. His three younger brothers Matto, Kansas, and Dakota tromped after him sounding like a herd of bison rather than werewolves. City living had made them soft and complacent. Now that they controlled their full moon shifts with medication, transforming to wolf had become a luxury rather than imperative. 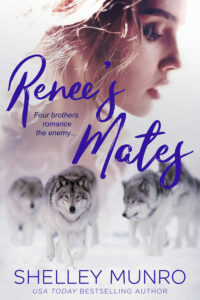 “Quiet,” Misty ordered in a loud whisper. “You’ll wake the baby. I’ve just put him down. Come to the kitchen and I’ll put on the coffee.”

Once they settled at the breakfast bar, Misty bustled about making a pot of coffee. Waves rolled into shore, visible through the large windows above the kitchen sink. The muted swish as the waves reached the seafront added an audible accompaniment, as did the two mothers and their brood of children building sandcastles on the beach.

Calian glanced at his brothers. Not one of them had any idea why their sister had summoned them. He turned back to Misty. Fatigue shadowed her eyes, but a new baby was a disruption. Hunter’s death had also shaken her. It couldn’t be easy going through the last months of pregnancy and having a baby after the death of her husband. They’d tried to be there for her—the reason they were all in California. That didn’t happen often because they ran a hotel conglomerate.

“Do you want us to hire help for the baby?” Matto asked.

“Already taken care of.” Misty tucked a strand of long black hair behind her ear. “I have nanny interviews scheduled for next week. The hospital called me yesterday. Hunter’s belongings—the things he had on his person at the time of the shooting—they located them. Evidently, a temp worker put them in the wrong place.”

“How did they know they belonged to Hunter?” Kansas, one of the twins, asked.

“The temp worker labeled the things correctly. They had Hunter’s name on them. His phone and billfold, cash and his watch.”

Calian exchanged a glance with Dakota, Kansas’s twin and shrugged. Misty would spit out whatever troubled her when she was ready. “Have the police any leads on who shot Hunter?”

“Is it something to do with the murder he witnessed?” Matto asked. “The one he couldn’t discuss?”

“They don’t think so, but the cop I spoke with admitted they couldn’t be certain. He said we’ll probably never know.”

Instead of the tortured pain Calian had seen since the funeral and the birth of their nephew, he saw something else. Anger. No, fury glittered in her brown eyes. Determination.

“I charged Hunter’s phone and guessed his password. It was our wedding anniversary date. His army buddy Chopper is a woman. There were photos on the phone. Selfies of Hunter and this woman. They were having an affair. I want you to find her so I can see her expression when she realizes their affair is no longer a secret. Bring her to me and I’ll spit in her face. The trips he took to meet his army buddies—the visits I encouraged—were to meet her,” Misty spat. Temper painted her olive cheeks with red and her eyes glittered with venom.

“Are you sure?” Dakota asked, the peacemaker in their family.

“You want proof? I’ll give you proof,” Misty snarled and stomped from the kitchen. She returned a short time later with a cell phone clutched in her hand. She reclaimed her seat and powered up the phone. After a few finger taps, she handed it to Matto, who was sitting next to her.

Matto thumbed through the photos and wordlessly gave the phone to Kansas. Dakota received the phone next and, finally, it reached Calian. He looked at the first photo of a woman in a helicopter. It was difficult to see her face with the helmet and sunglasses. The next photo was someplace in the desert. Afghanistan, he presumed since Hunter spent time stationed there before his deployment ended. Once he and Misty planned to start a family, Hunter hadn’t re-upped, instead taking a job with a local landscape gardener. A job he’d loved, according to Misty.
The third photo showed both Hunter and the woman in civvies, their faces pressed together as they hammed it up for the camera.

“There were more photos tucked in his billfold. I have no idea what he saw in her. She’s not even pretty.”

She wasn’t—not in the traditional manner. The woman didn’t smile much, but when she did, it lit up her face. Her brown eyes shone and two dimples dug into her cheeks, highlighting her plump lips and slightly too big mouth. In most of the photos she appeared somber, but it was obvious she and Hunter were relaxed with each other.

“No, Hunter only ever called her Chopper and let me assume she was a man.”

Part of Calian understood Hunter’s reticence. Misty was a jealous woman and had never shared well, but from what he’d seen of Hunter and his sister together… No, Hunter had adored Misty and his excitement on learning of his child had charmed their parents. He—hell, all of them had liked and trusted Hunter Kincade.

“Do you know where she lives?”

“All I know is that Chopper flies helicopters and was working north of here, helping with the fires,” Misty said.

“I don’t know who she works for. I tried to call the number on Hunter’s phone but it doesn’t exist.”

Calian nosed around the rest of the phone. Hunter had heaps of photos of Misty, and in each photo that included both Hunter and Misty, he gave the appearance of an infatuated man. Calian skimmed past one of Hunter and his sister because of the Peeping Tom sensation that swirled through his belly. Although both wore clothes, Hunter held his sister tenderly, his hand pressed to her belly. It was the shared intimacy, the clear love and an intensely private moment that had Calian uneasy. This wasn’t a man who intended to cheat on his wife. Hunter appeared besotted and crazy in love.

“Can we take the phone?” Calian asked.

“Keep it. I have copies of the stuff I want.” Misty gripped her coffee mug so hard Calian wondered if the crockery would stand the pressure.

Calian sipped his coffee and set it aside. Cold. He detested cold coffee. “Is there anything in his billfold that might help us find the woman?”

Each of his brothers scowled. Their reluctance to put aside their work didn’t surprise Calian, but they had competent staff. They’d slogged to make their company run with or without their presence. It wouldn’t hurt for them to step away for a month. Besides, they all owned phones and could work remotely if necessary. It was the age of the digital nomad. Why not embrace the fact?

“I couldn’t find anything helpful, but take it if you want. There were business cards and phone numbers I don’t recognize in his billfold,” Misty said.

“Do you have the number for the cop in charge of Hunter’s case?” Calian decided the cop might give him something. Hunter and another army buddy had been in Miami with several of their friends. A reunion of sorts. Hunter and his friend had witnessed a murder. Both had been remote witnesses, questioned from afar by the lawyers for their safety.

Calian and his brothers had always thought Hunter’s murder linked with the drug lord’s son who had died in prison shortly after incarceration. Hunter’s death smacked of revenge, and Calian wondered if investigating Hunter’s friend might stir more trouble along with secrets. Yeah, speaking with the cop and laying out the truth might net answers. It was worth a try.

“Can we have a peek at our nephew?” Dakota asked.

Misty eyed them with a stern parental glare. “If you wake my son, you will stay to settle him again.”

“Misty, why don’t you grab a nap or take a relaxing bath?” Matto suggested. “We’ll stay for a few hours and keep an eye on Rufus.”

“You’d do that?” Tears formed in Misty’s big brown eyes.

“And you’ll find this woman for me? I’d do it myself but it’s difficult with the baby.”

“We will,” Kansas promised.

“Thank you. I knew I could count on my brothers.” Her mouth opened in a huge and loud yawn. “I am tired. I haven’t slept through a night since I brought Rufus home from the hospital.”

Once Misty left the room, Calian stood and walked outside onto the terrace overlooking the beach. His brothers followed.

“Are we sure about this?” Dakota asked. “Hunter and Misty were mates. She’d bitten him. Hunter wore a mark.”

“He wasn’t a wolf,” Matto said. “While Misty bonded to him, it wouldn’t necessarily be reciprocal. She told me he didn’t know she was a werewolf. It’s easy enough to hide these days.”

“Look at this.” Calian pulled up the photo on the phone. “It’s a snap of Hunter and Misty. The intimacy between them makes me uncomfortable. That is not a cheater.”

“What are you saying?” Dakota asked. “That these other photos are innocent?”

“I’ve no idea.” Calian turned off the phone and shoved it in his jeans pocket.

Matto stepped off the deck and kicked at the sand. “We’ve promised Misty we’ll check it out.”

“And we will,” Calian said. “But we should do it with an open mind. I liked Hunter, and from what I saw, he loved Misty. We should tread carefully and build a case rather than jumping to conclusions.”

“The suspense in the story builds throughout this fast paced plot as the brothers have to decide between the revenge that their sister wants and their mate and to really get the adrenaline pumping, Renne’s past has caught up to her and is one step away from silencing her forever. Surprising twists add a bit more excitement to the story and readers never find a dull moment so they stay glued to the pages. Oh and readers are happy that the sexy polar bears put in appearance but this book is all for the wolves.”
~ Stormy Vixen Book Reviews

“This is an amazing story that will have you on the edge of your seat from beginning til end. The chemistry between them is off the charts hot. This is a well written and very entertaining story. I would recommend it to any book lover.”
~ Amber Johnson

“I love this series! I love the characters and the plot.”
~ Ellen Shannon