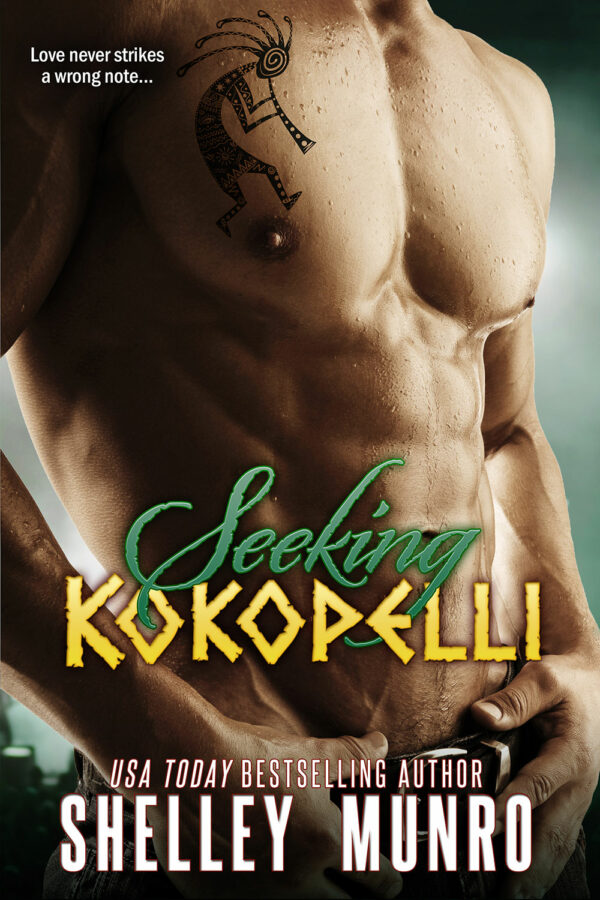 Ever since Nate McKenzie hired on as a roadie, musician Adam James has lusted after him. So far Adam has kept his distance, knowing Nate is mourning his dead wife. But lately Adam has caught the man returning his stares. Maybe it’s time to test the waters.

Besides, there isn’t much chance Nate will find out that Adam was once his people’s Kokopelli. His powers were stripped from him, along with the magical tattoo on his chest, when his orientation was discovered.

Nate is going crazy with guilt. Before his wife’s death, he never looked at anyone else, woman or man. Now his dreams are filled with Adam. He tries to keep his mind on his job and off Adam’s sexy body, but in a moment of weakness they share a kiss that sends them both up in flames.

Their relationship risks both their hearts and Adam’s female fan base, but the attraction is too strong to ignore. Then someone takes a shot at Adam—and his tattoo begins to reappear, forcing him to come clean with his lover. And Nate to decide exactly where his future lies…before a killer steals it away from them.

There was something about a long, slow seduction. Adam scrawled his signature across the top of the woman’s breasts and handed back the pen with a wink. 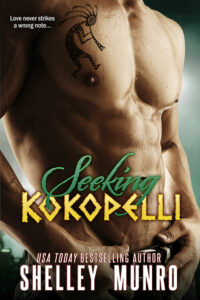 “Sorry, sweetheart.” Adam restrained a satisfied grin at the second low growl behind him. “I don’t want to get in trouble.” He blew her a kiss and turned to the next woman waiting impatiently for an autograph.

While a slow seduction didn’t have physical advantages, the furtive courtship he engaged in with Nate was the most fun he’d had in ages. Nate had started looking back. So far he hadn’t registered Adam’s pursuit, but he was interested. Confused too. Satisfaction pulsed through him at the secret knowledge.

After signing three more autographs, Adam waved to his fans and strode to the van. Nate walked directly behind him, and the devil in Adam made him halt abruptly. Nate crashed into his back. Seconds before he hit the ground, Nate grasped his hips, steadying him. Their bodies brushed before Nate stepped away, his hands falling from Adam’s hips.

“Sorry. Thought I saw someone I knew.” Adam caught his breath at the frisson of heat and climbed into the van before stupidity reared its head any further and he did something really obvious. Nate followed and closed the door behind them. J.T. drove and, twenty minutes later, they pulled up outside their motel.

Morgan climbed out of the van, raising both tattooed arms into the air in a huge stretch. A groan vibrated in his throat before he spoke. “Man, I’m beat.”

Cade smirked, his blue eyes sparkling with devilment. “Old man. I’ve got a date. I’ll be late, so don’t wait up.”

“Me too.” J.T. winked as he tugged the leather band from his dark brown hair. He ran a quick hand through his curls. “See you guys tomorrow at rehearsal.”

Cade and Morgan both played guitar and did vocals while J.T. rocked big time with the drums. They’d started after Adam met Cade in a pub. Cade had introduced him to Morgan and J.T. and things had taken off from there with the band rapidly growing in popularity. They spent most of their time together. The band was his family now.

Morgan yawned. “What are you doing, Adam?”

“Gonna chill.” Adam grabbed his saxophone. And plan his next move with Nate.

Nate and Keith drifted away with murmured good nights. Adam headed for his room, the one he shared with Cade. He’d intended to shower, grab a beer and blob in front of the box. Didn’t happen. Restless energy filled him, and he couldn’t sit still. Nate intruded again. Moodily, he kicked off his footwear. He’d never felt this way about a man before. There had been men over the years, clandestine sex that didn’t mean a thing. This thing with Nate—it felt different.

He knew about Nate’s marriage and his wife’s subsequent slow death from cancer. Hell, he knew it was too soon for Nate. The man still grieved. Despite the knowledge, he couldn’t stop. Something inside him, something mystical, propelled him toward Nate, his gut telling Adam they’d be good together even though the man obviously preferred women. A sudden scowl formed. Heck, he was probably putting himself in the way of a shitload of hurt. His mind told him he should walk away, but he couldn’t. His heart ached to try to ferret out the possibilities.

Cursing softly, he grabbed a towel and his room key and strode past the row of rooms to the hot tub, wincing at the bite of gravel beneath his bare feet. Someone was already there when he arrived. About to retreat, he spied a familiar black Stetson sitting by the side of the tub. Nate.

“Great minds,” Adam drawled, pitching his voice so it was audible above the bubble of the water. “Am I interrupting?”

Nate jackknifed to a sitting position. His mouth opened and closed before he sank under the surface again until only his head showed. The water plastered his dark hair to his head. A faint dark moustache and light beard framed his mouth and chin. The rest of his face was cleanly shaven. Dark brown eyes glanced at him, then Nate averted his gaze. “Nah,” he muttered finally. “Too wired to go to sleep yet.”

“Me too.” Adam yanked his black Stampede T-shirt over his head and shoved down his jeans. For propriety’s sake, he left on his boxer-briefs before sliding into the warm water. They were both tall men and, for a brief second, their legs touched. Nate drew back like a startled cat.

“I won’t bite.” Adam kept his voice low and even. He’d like to do more than bite. He felt the surge in his body, the slight filling of his cock. Maybe this wasn’t such a good idea.

“This book has a lot going for it: two likeable main characters with a deep emotional bond in Adam and Nate, an interesting premise, good secondaries in the other band members, blistering hot sex, and an unexpected villain willing to kill to get what he wants. There’s even a satisfying ending. What more could a reader ask for? Give this M/M a chance. You won’t be sorry you did.”
~ Literary Nymphs

“Seeking Kokopelli” by Shelley Munro is an enjoyable paranormal story. The writing is strong, the characters are fun, and the sex is hot.”
~ Rainbow Reviews

“Seeking Kokopelli is a romantic, heartfelt and emotional story about two men healing the pain from their pasts in order to embrace the promise of love in their futures. They are both strong and compliment each other’s personalities. It’s a wonderful book with believable dialogue and secondary characters that make the tale come alive. When Adam and Nate finally come together, the man love is sensual, satisfying and totally hot. It has meaning when they express their physical affections and that really does it for me. Ms. Munro consistently finds the perfect balance and gives readers a story they can connect with. If a reader is looking for quality content, and a satisfying happily ever after then I highly recommend this book.”
~ Whipped Cream Reviews