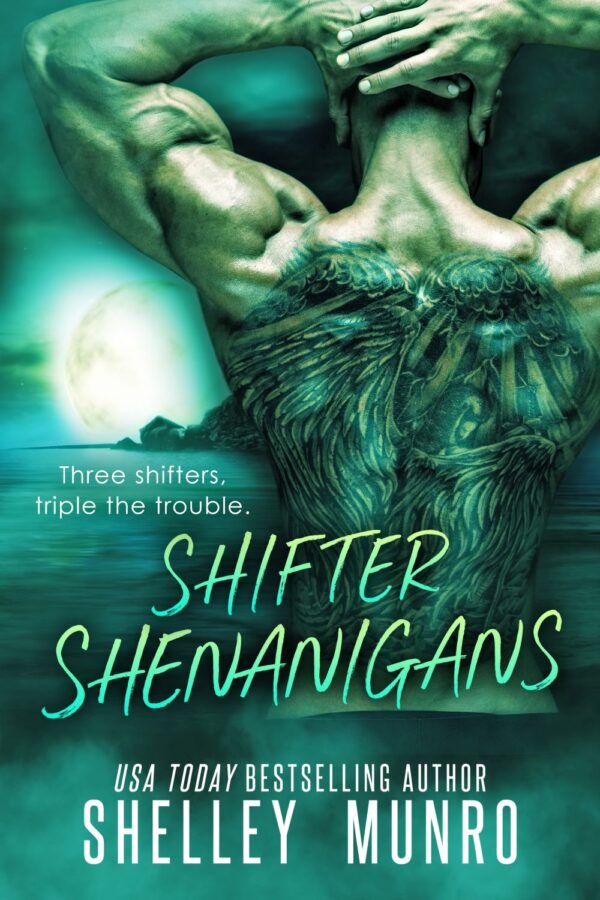 Three shifters walk into a bar…

After a few drinks, the black leopard shifter says, “I met my mate at the Middlemarch Ball. She wanted a one-night fling—one perfect night of passion, she said. One look was all I needed to know she was my fated mate. My Emily is a human, and she had no intention of taking a second chance on love.”

“That’s nothing,” the dragon shifter retorted. “I had only one use for women, but my human mate had a long-term crush on me. Talk about determination. We ended up working on an investigation together—a fake engagement thing—and haven’t been apart since.”

The leopard and the dragon turned to the polar bear.

“I met my lady at a train station,” the bear shifter shared. “She came for a vacation in our small town, and she never left.” He grinned. “She calls me her alpha male, and I call her my fish-out-of-water.”

You’ll love this paranormal shapeshifter romance box set because it contains sassy women who know what they want and strong, alpha men who will protect them to the end. Oh, and a little humor, a few secrets, and some danger and suspense to keep things interesting.

Other Books in the Triple The Trouble series 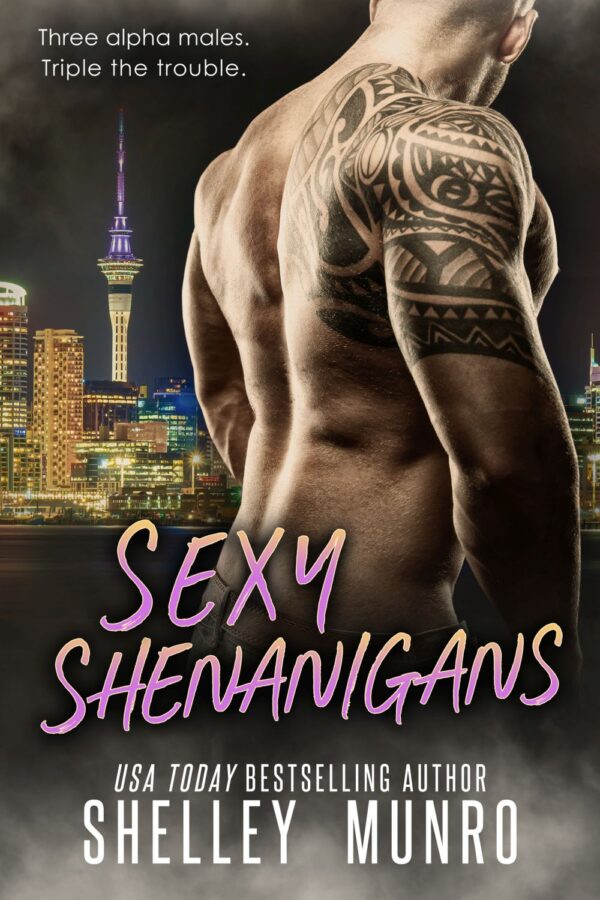 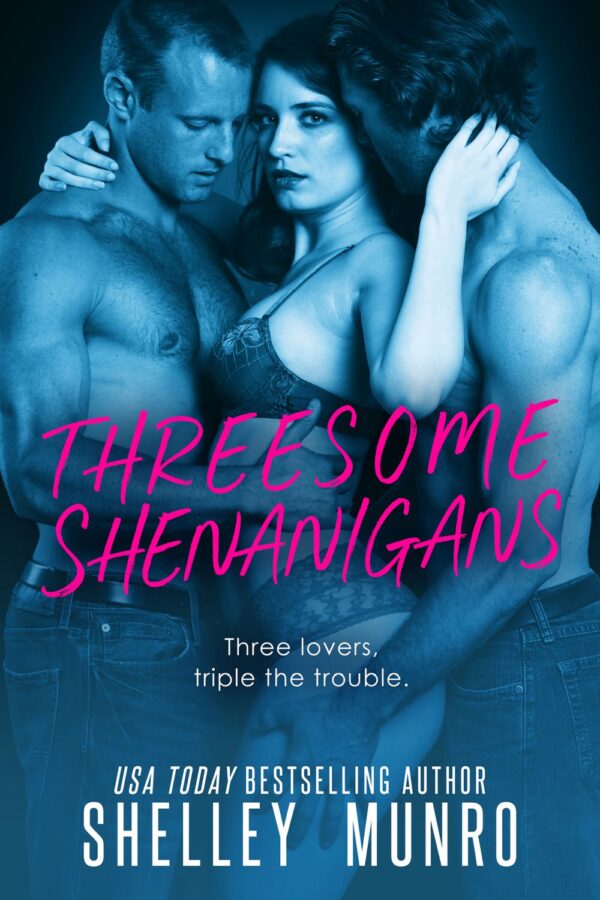 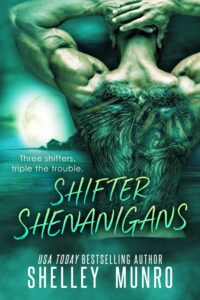 The lady in red.

The second brother to mention her. Curiosity piqued, Saber turned to check out the view. His breath stalled until the tight vise around his lungs reminded him to breathe. Saber inhaled sharply, his nostrils flaring, feline genes kicking in.

He wanted the lady in red.

But that wasn’t the purpose of this shindig. Saber consciously relaxed, telling himself she was too obvious. The invitation a little blatant for his taste, but she might spark the urge to mate in one of his brothers. “Fine. We’re next in line for introductions anyway.” He watched one of the elders walk up to the lady in red and offer his arm. The lady smiled, and Saber adjusted his thoughts. A touch of vulnerability flitted across her pale face before she answered a question posed by the elder. Wistfulness. Hope. She treated the elder with courtesy and respect, earning points from Saber. He’d noticed the impatience of some of the other women waiting to enter the marquee. Excitement jumped in him. This plan would work. The lady in red would make a fine sister-in-law.

The elder led her toward him and his brothers. Saber indicated Felix with a jerk of his head, but the elder stopped in front of him.

“May I present Joanna Scarlet?” the elder said. “This is Saber Mitchell.”

“Just call me Jo,” the lady in red murmured, her voice a low, sensual hum that speared through him, winding his stomach in knots of desire and lust and uncharacteristic possessiveness. Her attractive floral scent reminded him of old-fashioned flowers and herbs. Maybe a touch of vanilla. It seeped deep into his lungs, drawing him in like a helpless insect. Saber sighed. His Scarlet woman. If his brothers didn’t stop with the leering, he was going to smack some manners into them. Whoa…his?

She studied them all with frank interest and nodded when the elder introduced his brothers. Shock finally yielded to common sense and the voice of reason. Saber saw Joanna—call me Jo—was chatting to another elder and a plump dark-haired girl who had stopped at their side. “Okay, boys. You’ve had your joke. How much did they pay you, Sid?”

The elder offered a gentle but determined smile and spoke in a low undertone so the lady didn’t hear. “Lad, you need a mate. This one is for you.”

A protest formed in Saber. He didn’t have a destined mate. And he’d accepted his fate to travel through life alone when his search during his younger days had turned up nothing but entertaining sexual partners. The elder was wrong. Wasn’t he? He glanced at Joanna Scarlet and battled the bolt of lust that zapped the length of his body again. Every sense jumped to hyper-alert. He smelled her delicate floral perfume and the underlying feminine scent specific to her. Heard her slow, steady breaths. Saber could practically feel her body pressed against his. She called him on every level. Pushing aside the panicked, out of control sensation, he aimed for nonchalance. Oh, yeah. He couldn’t deny he was interested, but what if it was a false alarm? What if he was disappointed again? Saber answered his own question with a silent grunt. He’d pick himself up and carry on. That’s what he’d do. That’s what he always did.

“Not frightened of the little lady, are you, Saber?” A clear taunt colored Felix’s whispered words. When Saber glanced at his other brothers, he saw amusement and unholy glee. Ambushed. In his own trap.

Saber turned to Jo, accepting the hand fate and the elders had dealt him. “Would you like to dance?”

“I’d love to,” she murmured, tucking her hand in his. Her fingers were cool to the touch, but Saber knew instinctively this was a façade. The lady possessed hidden fires, flames as hot as her Scarlet name. Suddenly he wanted to tend and stoke the fires until they flared out of control. But not here. Not with everyone looking.

Emily moved into his arms, her heart giving an excited blip. When a slow ballad started, she moved automatically across the grass dance floor. Her heels sank into the grass so she danced on tiptoe, balancing easily in his arms. Her bag swayed against her hip with each move, its contents a silent reminder of what she wanted to achieve tonight.

She had no idea what had possessed her to tell everyone her name was Joanna. Cinderella syndrome? Perhaps. Because tonight she felt like a fairy tale character. The lure of fun and mischief called, enticing her to outrageous thoughts of a one-night stand. Her mouth firmed with determination. Thoughts she intended to carry out.

She tipped back her head to study the man—Saber Mitchell. About six inches taller than her, the man had short, dark hair and light green eyes. Intense green eyes full of sensual promises. Emily shivered with longing. The touch of a male. Sex.

It had been so long.

Touches of humor lurked at the corners of his beautiful eyes and lips as if he smiled often. Put together, his features were attractive and pleasing to her eye. The muscles beneath her fingers were strong and his tan, along with his calloused fingers, told her he worked outdoors. Although the man was difficult to read, Emily sensed a wide vein of integrity ran within. She’d watched him with his brothers while they waited to enter the marquee.

Yep, he was perfect in his tight black trousers, the white cotton shirt and contrasting red tie.

The exact opposite of Michael.

A few more subtle tests would tell if he’d qualify as the man. Was he married for one? She wasn’t about to break up a marriage, not since she’d been on the receiving end of a triangle. Ditto any serious relationships. Once she’d cleared up these questions, it was full steam ahead. Emily knew it was irresponsible, fool hardy, a few other things as well but she wanted to feel a man’s body wrapped around her, she wanted the closeness and the intimacy even if it was for just one night. Heck, she plain wanted sex. Playing alone didn’t cut it any longer. Emily needed to know she was desirable, that a man wanted her.

Tonight was the night.

“MY SCARLET WOMAN by Shelley Munro will have you grrrrrrowling and purring in the most delicious way with her book…. Ms. Munro writes the most titillating and exotic books…. My recommendation for this book is to have these things on stand-by: ice water, cold shower, bed or a man, and these are just for starters, but not necessarily in that order.”
~ 5 Ribbons, Romance Junkies

“Superbly written, this tale had me hooked. Are you a paranormal fan? Specifically, a feline shape shifter fan? Then this is most definitely one for you!” ~ Novelspot

“Shelley Munro’s BLUE MOON DRAGON is wonderfully addictive. Emma’s boldness and Jack’s masculine prowess combine to make a thrilling story, throw in a shapeshifter spin and you have a story that will leave you breathless as you wait for each new encounter to unfold in the tale.”
~ 4.5 Ribbons, Romance Junkies