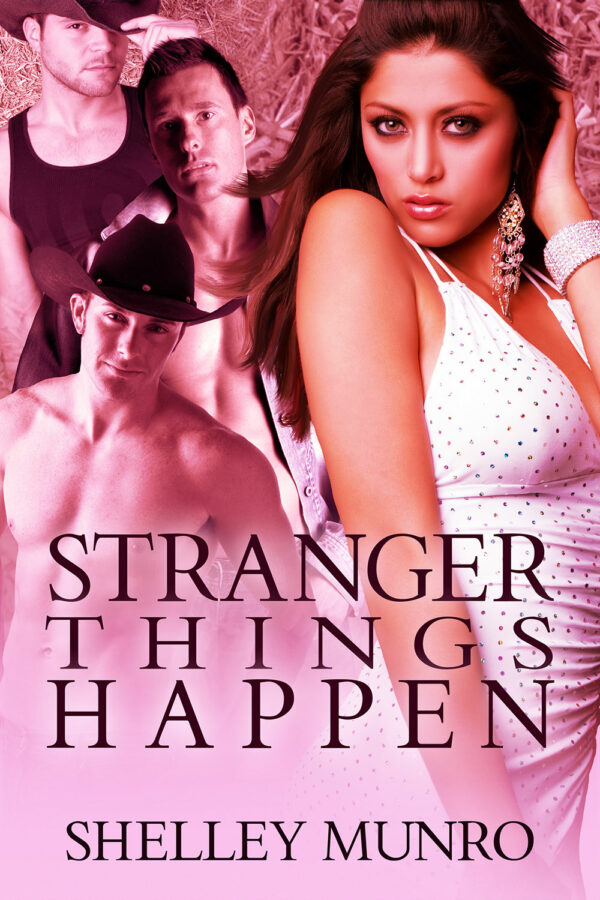 All Friday nights should be this good…

Computer programmer Anna Walton is lonely and facing a dry spell of epic proportions. Tired of the dating scene, she decides to spend her Friday night testing the Reality Suite, a program she and her friends have developed. She orders up lighthearted flirting and energetic dancing in a nightclub with a fruity cocktail or two on the side, but what she gets are three hot cowboys with sex and mutual pleasure on their minds.

Dante Rosetti, his brother Gabriel and cousin Cayle take one look at the curvy Anna and decide exactly how their evening should play out. Lots of naked bodies, sensual sighs and hot, belly-clenching pleasure.

Once she’s adrift in a stormy sea of fantasy sex with three strangers, will Anna ever embrace reality again?

“Well, helloooo.” It wasn’t every day a girl glanced up from her work station to glimpse an ass that made her hungry to take a bite. Tired from hours of programming, Anna Walton blinked to clear her gritty eyes, positive she was hallucinating. The view remained. 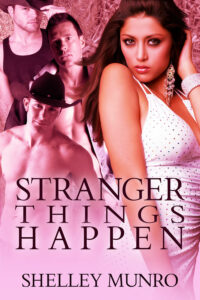 Tall with unruly dark hair, Mr. Sexy Butt sauntered from sight and she sighed with disappointment. She would have liked to see more. A lot more. Heck, she might have even risked speaking to him, fluttered her eyelashes or, if he passed muster, she might have given him the boob test in the hope he’d ace the exam.

Fantasies about hot, sweaty sex pushed through her exhaustion. Dreams and her imagination were about as close as she managed to getting to the real thing lately. Most men scrutinized her body, immediately jumping to conclusions and porn-star delusions.

Hello, this girl possesses brains to go with her boobs.

Her fingers gripped the edge of her desk and she imagined clutching those taut buttocks and giving head. Heck, might as well go for broke. She visualized other hands fondling her, pinching her nipples and toying with her clit. Oh yeah. Down and dirty sex with multiple partners. A breathy sigh whispered from her while a tiny shudder of pleasure set her squirming on her chair.

A rough nudge at her shoulder, the painful jolt of her elbow against the desktop wrenched her away from her fantasy world.

“Ouch!” Anna glowered at her three smirking workmates and rubbed the sore spot on her arm. “What is your problem?”

“I saw you ogling his ass,” Greg said. “Good to see. I haven’t noticed you eyeballing a man for a long time.”

“If you’re going through a dry spell I’d be happy to help out,” Greg added.

Anna rolled her eyes. “Get real. I know you guys too well.” They’d worked together on the Reality project for years. They’d gone to college at the same time and experienced both adversity and success. They were like family and stood with her when her fiancé—their friend—died of cancer four years ago now. “Besides, your girlfriend might object.”

Barry pushed his glasses up his nose and smirked. “Pick me. I’m much better looking than Greg anyway.”

Cam leered, his Adam’s apple jumping when he swallowed and spoiling the effect. “You can jump into my bed anytime, babe.”

Anna, used to her friends, smiled sweetly. “When hell freezes over. I know you too well.”

Mr. Sexy Butt, on the other hand, might have a chance even if his face didn’t match the tempting rear view.

She’d be the last one to judge by appearances since people took one glance at her full figure, black hair and blue eyes and instantly thought stripper. Never mind that she had a sharp brain to go with her body. All her life she’d fought the stripper stereotype and not even years of hard work and dressing to hide her physical assets managed to change people’s perceptions.

“Who was that anyway?” she asked, striving for casual.

Greg shrugged without interest. “I didn’t catch his face. Probably one of the new owners or their people.”

“When do you suppose the rest of us will meet the owners?” Cam paused mid-stroke on his computer keyboard to take a sip of coffee. After a swallow, he grimaced and set his mug aside.

“Probably next week after the official takeover.” Anna didn’t hold any concerns. Their jobs were safe enough.

“Don’t worry,” Greg said, confirming her thoughts. “Barry and I both liked Mr. Rosetti, the guy we met the other day. We’ll be fine.”

Barry stood and whipped off his glasses to polish them. “Greg’s right. We won’t have any problems with the new owners. I’m more worried about you.” As one, the three men focused on her.

Greg tugged the leather tie from his shoulder length hair and ran his hands through the tangled mess. “Are you sure you don’t want to come out for a drink with us? We should celebrate finishing the Reality Suite.”

“Another time,” Anna said. “I want to test the final tweaks I worked on today, make sure the game works seamlessly.”

“You work too hard.” Barry pushed his glasses up with a forefinger and stared at her in a chiding manner. “All work and no play. Yada, yada, yada.”

Anna glanced at her computer screen, picked up her pen and jotted a quick note. “The test won’t take long. By the time I finish the traffic will have thinned out. The drive home will take half the time.”

“What scenario are you testing?” Greg stood and stretched. “Do you want us to help? The secretary sent a request for me to program a game for the new owners anyway.”

Anna pursed her lips and mentally filed through the possibilities before grinning. “I have a yen for dancing. A New York night club, I think.”

“That’s it. I’m not leaving until I check out your clubbing gear,” Greg said. “Go and change and we’ll set up Room B for you.”

“Thanks.” Her friends weren’t always pains in her ass. Only sometimes when they felt she needed a lift. With a grateful smile Anna stood, her tiredness falling away, replaced by anticipation.

She and the guys had developed the groundbreaking software after a random conversation at college. It was different from available software because the games took on an edge of reality, with people actually entering a lifelike setting and situation. The gamer picked a scenario, dressed to fit the part and interacted with the setting and the lifelike characters populating the game. A person could play alone or with a group and the only limit was imagination. Their new game was so different and original Rosetti Inc. gobbled up the company who originally employed them. From what Mr. Rosetti told Greg and Barry, they intended to market the software to military and police for training purposes.

Humming, she scooped up her bag and hot-footed it to the restrooms. She exchanged her loose sweater and jeans for a tight red dress and matching stilettos, embracing her inner bad girl. Lots of dancing, a few fruity cocktails and tons of flirting would lighten her funky mood. While she might return to an empty apartment, she’d arrive home on a high and maybe even break out her trusty vibrator to complete her celebration. Easier than picking up a stranger because she could always count on her vibe to get the job done with minimal fuss. Too bad her toy couldn’t cure loneliness.

Oh my, Oh my, What I wouldn’t do to live in Anna’s World. From the first page you are immediately bonding with the characters. Shelley Munro’sbook Stranger Things Happen is truly a delicious treat to savor, one yummy hunk at a time. Mrs. Munro, where did you come up with the concept of this book? I enjoyed the plotline and the route it took. I could not get enough…I want more! ~ Dark Diva Reviews

Ms. Munro, I’m not sure where the inspiration for this story generated from, but you knocked this reviewers socks off and now, I want more….I’ll be recommending this one to my friends and re-reading it on several occasions while I anxiously wait for Gabriel and Cayle’s story. HINT! HINT! ~ Rated 5 Ravens and a Recommended Read by the Blackraven!

I really enjoyed the characters and the storyline of Stranger Things Happen. It would be wonderful to have a virtual reality where you can experience all that you want to experience in a safe environment. I loved how Shelley Munro worked out the ending! If you are looking for a fun and sexy adventure, then Stranger Things Happen is for you! ~ Sizzling Hot Books Reviews