Thirteen Things about The Real MIDDLEMARCH

1. Middlemarch is a small country town, in Central Otago, New Zealand. It is about 80 km West of Dunedin. It’s located in the Strath Taieri Valley.

2. Several suggestions exist about how the township was named. One is that Mrs Alice Humphreys, whose husband Edward Wingfield Humphreys owned and had surveyed for sale of sections in this new township, was reading George Eliot’s novel Middlemarch. Another is that the name is from the obsolete English term “march” meaning a boundary – in this case a middle area between two rivers.

4. Each year Middlemarch holds a singles dance and a special train (nicknamed the Love Train) carries women and men to the dance from Dunedin.

In November last year our Community Board was presented with some statistics about rural health and other services in this area. As part of her presentation, Pauline Carruthers, the local Plunket Nurse, District Nurse and at that time only local practise nurse in the area, noted that we needed more nurses and made the flippant comment that we should marry some of our bachelors off to some nurses.

The Community Board took the idea one step further and suggested to the local A & P Society that it would arrange for the sponsor of the Dance for its Centenary Show. We contacted Country & City Contacts (NZ) Ltd. They are an Amberley-based dating service that has had huge success in the rural areas, especially of the South Island. Henk & Joy van Leir were enthusiastic and supportive of the idea of publicising the dance as a good place for their clients to meet each other and also some of our bachelors.

6. The area has some rare creatures – the mountain weta, the Otago and Grand skinks and the NZ falcon.

7. The area is also home to the Sutton Salt Lake. The water in the lake evaporates during the summer.

8. There are also special clouds in the area called the Tairei Pet. A cloud formation reportedly found only in one or two places in the world. It is formed by high north westerly winds being forced upward over the Rock & Pillar range – spectacular and unnerving by its sheer size and its association with the high winds.

9. It is the start of the 150km Otago Central Rail Trail, a path that stretches from Middlemarch to Clyde. People can walk, cycle or ride horses along this path, staying overnight at stops on the way.

10. As I mentioned earlier, there’s a train from Dunedin. It travels through the spectacular Tairei Gorge and is popular with tourists.

11. Scarlet Woman, Peeping Tom and Stray Cat Strut are all set in Middlemarch and feature various members of the Mitchell family.

12. Go here to learn about how the series was born, plus there are photos. There are also Middlemarch photos here. 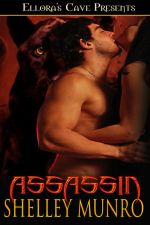 Feline shifter Leo Mitchell is the pretty brother who attracts women with ease, but he’s turned picky. He suspects the mystery blonde hanging around Middlemarch is the one for him. If only he could grab the elusive female and seduce her. Oh yeah. He craves some hot, sinful lovin’ with the lady in black leather.

Assassin Isabella Black has harbored a huge crush on hunky Leo for ages. Because the timing sucked she’s watched him from afar, praying another woman won’t snatch the hottie away before she’s free to stake a claim.

Finally the pair meet. Isabella offers her naked body but Leo counteracts with a cup of tea. Seems Leo likes to call the shots when it comes to sex. A day later they’re finally dancing horizontally. It’s smokin’ hot, steamy, delicious—everything she’s ever wanted. Isabella is ecstatic until another assassin threatens to ruin her happiness. It’s life or death now. One wrong move and her secrets will destroy the Mitchells along with everything that has become dear to her…including Leo.

Do you like small town settings or do you prefer sophisticated city settings for your romances?

Get the Thursday Thirteen code here!

The purpose of the meme is to get to know everyone who participates a little bit better every Thursday. Visiting fellow Thirteeners is encouraged! If you participate, leave the link to your Thirteen in others’ comments. It’s easy, and fun! Trackbacks, pings, comment links accepted!
View More Thursday Thirteen Participants