Hippos or hippopotamus (river horse) are known as the most dangerous animal in Africa, and they kill many people every year. You wouldn’t think they’d be dangerous, given their appearance. They’re plump with thick bodies and short legs, have a round head with small eyes and ears and a greyish-brown skin. They have no hair on their bodies except for a few bristles on their muzzle and at the end of their stubby tail. 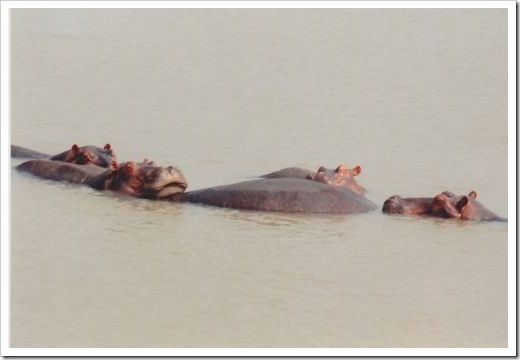 A hippo spends its day lazing in the water. This is where it feels most comfortable and where it seeks refuge if it feels threatened. They can dive for up to 15 minutes but more commonly their dive times are one – five minutes. Water keeps their skin clean.

During the evening and at night, they go ashore to graze. They make a sound like a cow bellowing or a horse-like neigh when excited. They also snort when they’re in the water.

When we visited Malawi, we camped on the edge of a river. The next morning, we were all complaining about people snoring and accusing each other of the crime. It was in fact hippos wandering around our campsite. So glad I didn’t need a restroom visit in the middle of the night! 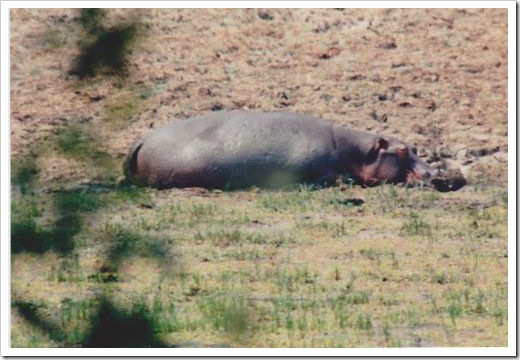 Hippos have a good sense of smell and also good hearing. Their sight is fairly good.

Apart from man, hippos have few enemies. Crocodiles might kill young hippos while on land groups of lions can possibly bring down a solitary animal.

The groups of animals consist mainly of females and non-breeding young. A group of females will be watched over by one male. Baby hippos are born in the water. 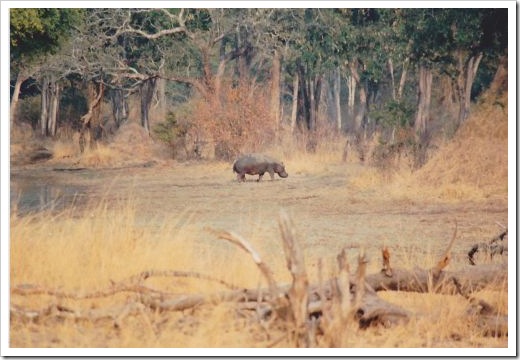 Off for a wander…

It’s not good to get between a hippo and water because this will make the creature feel threatened. Hippos are also very protective of their young and a person should never get between the mother and her baby. Hippos can run faster than a human over a short distance.

A group of hippos is called a pod, a herd or a bloat.

I have to admit I’d never call them pretty, but they are an interesting animal. The pygmy ones are cute, especially the new born calves. I saw one on the news the other day and immediately wanted one for a pet.

Where does a hippo fit on your scale of likeable creatures?

Source: A Field Guide to Mammals of Africa by Theodor Haltenorth and Helmut Diller