Here is a short snippet from Secret Lovers. Maggie and her friends go Speed Dating.

Saved by the bell. Surely the dates couldn’t be all as bad as Stewart?

She slipped into the next seat and smiled a welcome. To her relief he wasn’t as bad. He just wasn’t very interesting either. Her mind drifted to spanking and her blog.

“Is there anything you’d like to know about me?” he asked. “Maggie?”

“Yes, what do you think of the idea of spanking in a consenting adult relationship?”

The man’s mouth opened and closed before he replied. “Spanking? During sex, you mean?”

“That’s right,” Maggie said in a crisp voice. She almost felt sorry for him. Almost.

“I haven’t thought about it,” he said. “Er…I suppose I could try it. What would you spank me with? Would it hurt?” 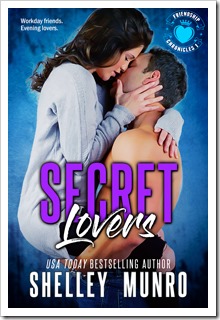 Here’s the blurb for Secret Lovers, the first book in my Friendship Chronicles series:

A teeny-tiny crush. Maggie Drummond has one on close friend Connor Grey. Such a pity he prefers leggy blondes when she has deep brown hair and determined curves.

Then, there is her newfound pursuit in kinky—no, more adventurous, out of norm sex. Nothing too bad, you understand. It was reading the steamy romance that sent her on a jaunt down Spanking Avenue and now she’s set up an anonymous blog to explore her interest. Perhaps it’s best if she sticks with current boyfriend Greg and asks him to spank her…even if Connor pops into her fantasies like a seductive magical genie.

The recent changes in Maggie don’t escape Connor’s notice. Now that her boyfriend has dropped her, and luck has gifted him with inside knowledge, he can finally—carefully—make his move. But, given his family history, laying a hand on any woman, even in fun, is a line he’s reluctant to cross.

As Maggie gives in to the temptation to let Connor add spicy sin to her life, she finds herself juggling lies, half-truths, friendship and sensual delights. Her job is in jeopardy—and she’s falling in love. Exploring her fantasy is one thing, but she’s beginning to question if indulging her own pleasure is worth the cost to everyone around her.

Warning: Contains a girl-next-door with spanking on her mind and a sexy rugby player who sees past her shyness and insecurities to the sensual possibilities beyond.

Secret Lovers is available from Amazon and free with kindle unlimited