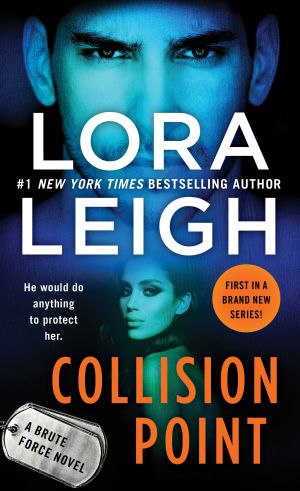 SHE’S NOTHING BUT TROUBLE
Riordan Malone is more than a bodyguard. As an Elite Ops agent, he’s ripped, raged, and ready to rumble—a true warrior, inside and out. But no war zone can compare to the battle in Rory’s heart when he lays eyes on the only woman he’s ever loved—and thought he had lost forever. . .

HE’S EVERYTHING SHE NEEDS
As the daughter of a crime lord, Amara Resnova has endured the cruelty of her father’s enemies—and has tried to escape that world ever since. Now, she must reach out to the one man who saved her life, even if she’s never forgiven him for breaking her heart. But Amara is tougher today than she was then. She’s also more desirable to Rory—and dangerous to love. Can he protect her from her father’s enemies without surrendering to his own passions…or will love seal their fate for good?

In a brief precis of the plot we have Amara Resnova who was abducted and badly injured six months ago. Also injured during her rescue, we have her lover Riordan Malone, soldier and protector. We meet our two lovers when they come together again. Amara doesn’t recall much about what happened or who did it and while Riordan knows more, he’s playing his cards close to his chest.

Amara is strong and determined. She’s feisty too, and her father’s overprotectiveness drives her crazy. She also has vulnerability due to the abduction. Now someone is attacking her anew and she seeks help from Riordan, bringing them together again.

Riordan is strong, arrogant and confident. He knows what he wants and that is Amara. He is determined to keep her safe. He and her father know more about her abduction, but they’ve been advised to let her remember on her own.

Emotion drips off the page, and the heat between Amara and Riordan is combustible. They push each other, yet the love between them is palpable, especially toward the end of the book.

The layers of this story unpeel slowly as Amara recalls the things that happened before and during her abduction. Danger lurks in this suspenseful read and everything comes to a suspenseful climax. The epilogue gives us the seeds of the next romance in this action-packed series.

There is a fated mates feel to this series that I like very much. I mean who doesn’t want to find the soul that completes them? This is the first book in a new series, but it feels as if it is the second because it ties into another one of Ms. Leigh’s series.

My one criticism is that the type of characters and the dynamics between them are very similar to those in other Lora Leigh romances. While I enjoy the bossy arrogance of the hero and the spirited heroine, I’d love to see something slightly different from Ms. Leigh.

I enjoyed this romance for its suspense, the heat and the emotion, and I ended it wondering why I’d drifted away from this author. Big mistake! She writes a steamy and highly enjoyable, highly emotional romance. 4 stars.