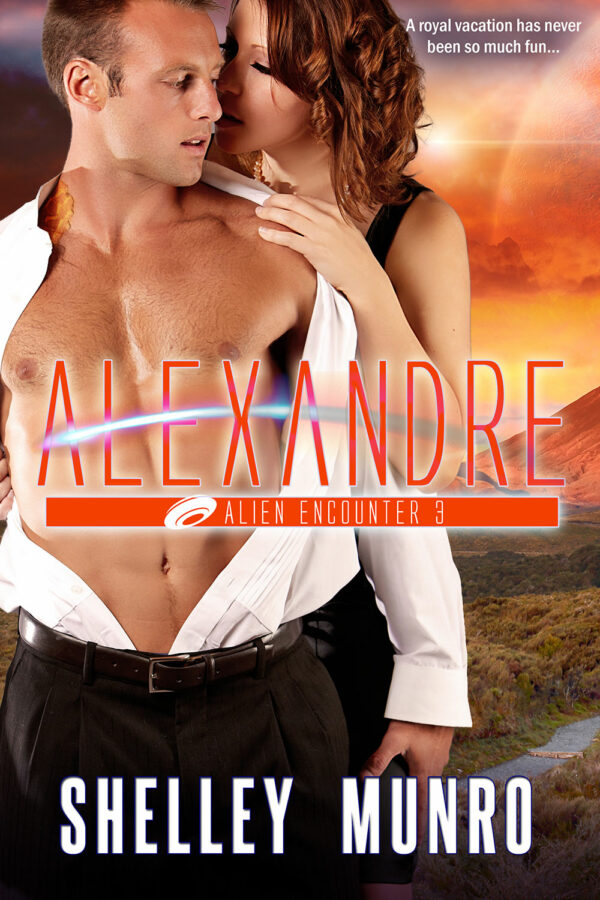 Sex. Lily Morgan hasn’t had any since her husband ran off with his boyfriend. But where will she find a man willing to overlook chronic clumsiness, dimpled thighs, and cellulite?

Sex. Prince Alexandre Bellangere has too much. Sex, that is. Being treated as a sex object is becoming a pain in the ass. Heck, he’s more than just a pretty face and muscular body. Alex has brains and ambition.
But Dalcon princes are expected to have sex, mate and breed royal undergrowns. Determined to change his life, he sneaks from the palace and the planet disguised as plain Alex Bell.

Sex. Lily Morgan takes one look at the golden stranger and starts thinking “what if?”

Alex Bell takes one look at the curvy travel agent and reconsiders his stand on sex. Maybe.

Sex. Lily’s family is not happy about her mating with an alien they know nothing about. They decide to leave Killer, the talking dog, to keep an eye on the situation.

Other Books in the Alien Encounter series 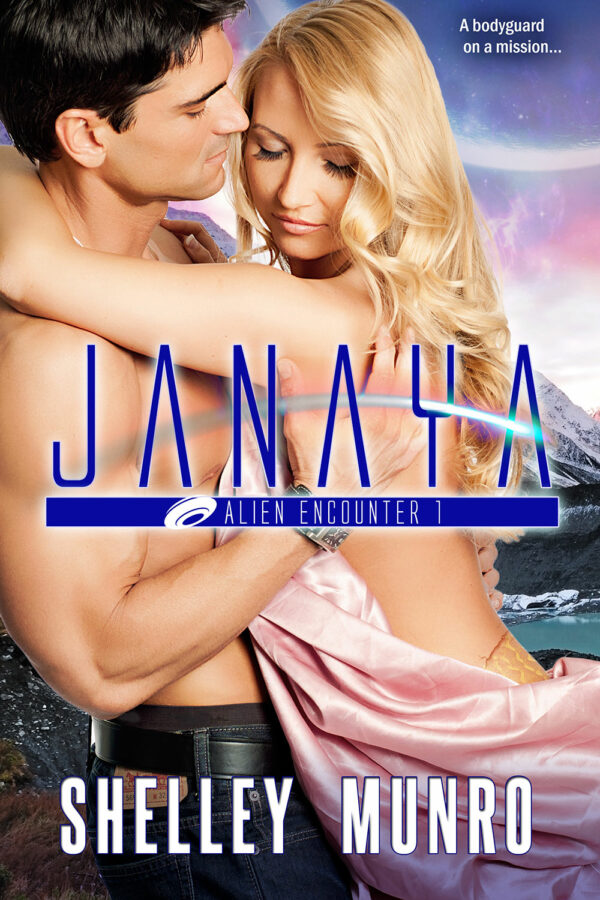 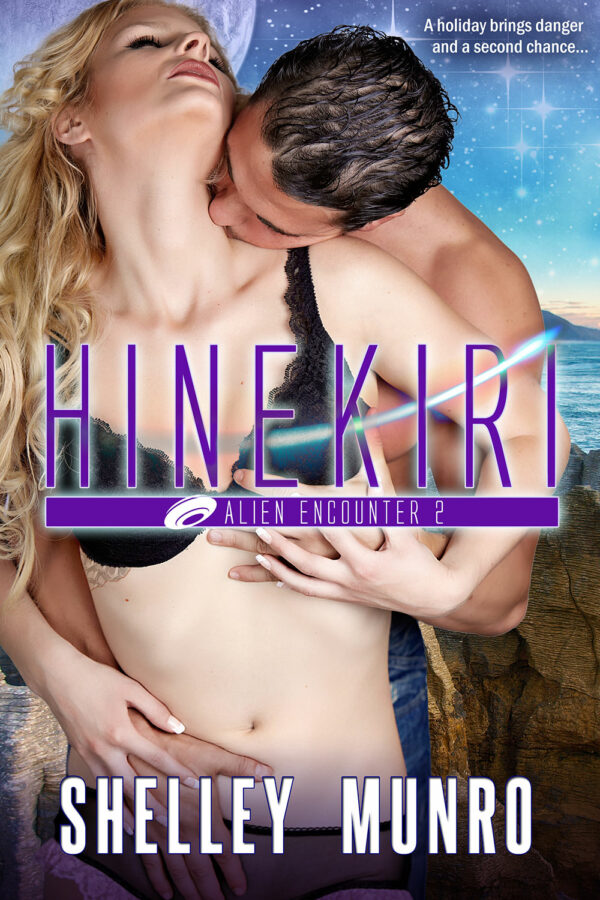 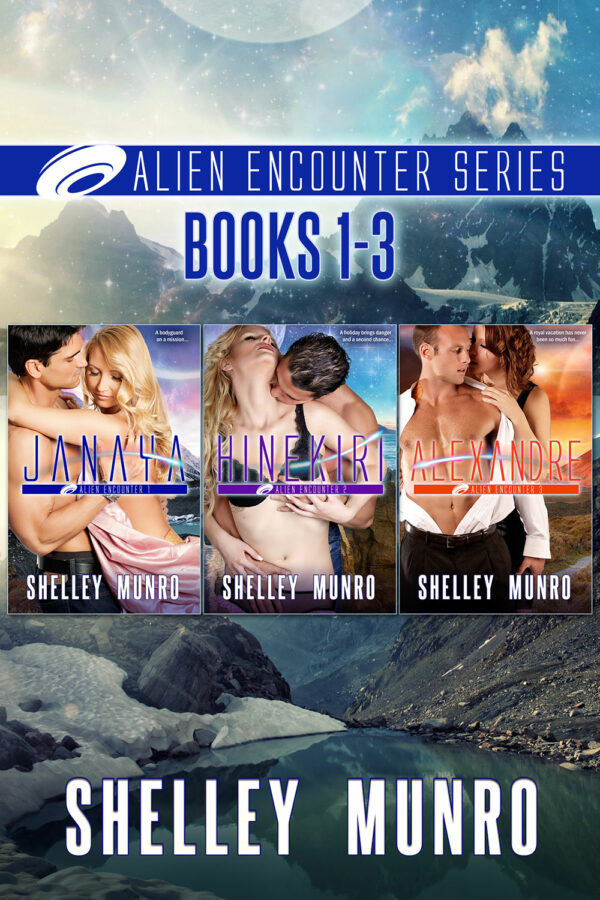 Alex expelled a heavy sigh of relief as the spaceship took off. He stared at the shiny silver disc until the cloaking device slid into place and shielded it from sight. The rumble of the engines faded to silence. 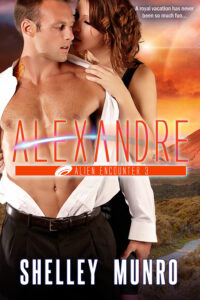 The lot of them, and he was still alive to tell the tale.

Exhilaration galloped through him along with a sense of freedom. Alex inhaled the fresh, crisp air in the hilltop clearing. After the planning and intrigue, he was really on Earth. Although dusk was rapidly turning to dark and they would soon need the torches to navigate the rutted track back to Luke’s vehicle, Alex soaked up every new sight. The strange ferns and the tall, stately trees Lily had said were called kauri. A bird called. More pork! More pork!

“That’s New Zealand ‘s native owl. It’s called a Morepork after the sound it makes.” Lily played the torch over the track and stepped over a fallen branch.

Alex turned to smile at her but was careful to keep a full arm’s width between them. Despite the simmering temptation, he’d keep his hands to himself, and everything would be fine. No nasty bonding entanglements to stuff up his dreams.

Lily grinned back, and a twinge of need rode him. His heart beat a little faster and a faint film of sweat dampened his forehead. Hands off , he reiterated silently. Keep to his plan and his dream would come to fruition. Lily was a complication he didn’t need. He’d seen his cousin give up a long-held ambition because of a female. That wasn’t going to happen to him.

A loud rustle and the snap of a breaking twig sounded in the bushes to their right. Lily started, let out a faint squeak and promptly tripped on an uneven tuff of dirt. Alex whirled, instinct kicking in. He scooped her up, saving her before she hit the ground.

Lily thudded against his chest, a soft armful of woman. Her generous curves melded against his flesh as though she was designed especially for him. Alex sucked in a deep breath as he tamped down on the searing need that burned his body and had his cock leaping with acute anticipation. She smelled of sweet flowers and woman. She felt like a soft, billowy cushion. Alex closed his eyes while he fought for control. Hell, he could feel the binding ties knitting together into immutable knots. Panic flared, and then she moved in his arms. His eyes popped open.

“Sorry,” she said, sounding a trifle winded. Her warm breath puffed against his mouth as she stared up at him. Tense silence reigned as they studied each other.

Let her go. Stand her on her feet and step away. Alex issued the release order to his hands. They ignored the instruction and flexed, kneading the yielding, feminine flesh of her buttocks. A pained groan escaped past his clenched teeth when she pressed closer. The air pulsed between them full of possibilities. Alex thought about the consequences, but with Lily cuddled in his arms nothing else seemed important. Innocent eyes drew him in, teasing but subtle in their goading.

Lily swallowed loudly then her tongue swept out to lick her lips. Another groan built at the back of Alex’s throat. Pure enticement. Torture. He lowered his head, wanting to claim her lips, to taste her, and sip and savor more than he wanted his next breath. Lily rose up on tiptoes straining to meet him, her face mysterious in the moonlit darkness. Alex lowered his head a bit more. Their lips touched briefly and then parted.

Another loud rustle sounded right beside them. Alex and Lily sprang apart, both staring at the swaying leaves of a lacy fern.

“Who’s there?” Alex demanded when all he wanted to do was curse out loud at the interruption and because he’d left his weapon back at the Morgan house. Only a fool went out without a weapon. He thrust Lily behind him. “Come out with your hands where I can see them.”

Alex straightened from his protective stance in front of Lily. “Why aren’t you on the ship with Janaya?”

Lily laughed, a soft tinkling sound that made him yearn to hold her again. “She’s hardly likely to answer you back.”

Killer stuck her nose in the air, presenting him with pure attitude. “I needed to use the restroom. I didn’t expect them to go without me. Call them back. Tell them to come get me.”

Alex opened his mouth to blast Killer then remembered Lily was present. For some reason, no one had seen fit to tell Lily about the dog talking. He wasn’t about to break the news.

“She doesn’t seem to like you much,” Lily observed as the dog growled low at the back of her throat.

And the feeling was mutual!

A loud ring broke the tense silence. Lily fumbled in her pocket and pulled out a cell phone. “This is Luke’s phone, so it’s probably for him,” she said. “I’d better answer. It might be important.”

Alex looked on with interest as she juggled the torch and the small phone. Her breasts swayed, drawing his attention and making him wish Killer’s timing hadn’t been so off. Shaking away the fog of lust, he relieved her of the torch and aimed the beam directly on the keypad. Their hands touched during the transfer. Lily gasped while Alex gritted his teeth and thanked the gods for the dim light since his body was broadcasting signals difficult to miss. His cock ached insistently, as it had since meeting Lily, and his legs quivered in tandem. One look at his raging hard-on and the female would likely run a mile. If he’d been at home, he would have grabbed a female, maybe two, and eased both his intense erection along with the burn of stress.

But he wasn’t at the palace. This was a whole new experience.

Lily stabbed a button on the phone and held it up to her ear. “Hello. Luke? What are you ringing me for? Is there a problem?” She listened for a few seconds. “Killer’s here with us,” she said. “I’ve no idea how it happened. Are you coming back for her?”

Alex noticed the dog listened as closely to the one-sided conversation as he did.

“But Alex and I can’t take Killer with us. Most of the hotels don’t allow dogs.”

Bloody hell. They were trying to foist the devil creature on them. Time to speak up. “I don’t think-”

“Smuggle her into the hotel in a bag! Luke, are you mad? You’re a policeman. So is Dad. You shouldn’t encourage me to break the law. Besides, how am I going to make Killer stay quiet? Knowing my luck she’ll bark at a relevant moment or worse, tear after the owner’s cat or.or eat their goldfish!” Lily paused to listen to her brother then handed the phone to Alex. “He wants to talk to you.”

Alex accepted the phone from Lily and tried not to react to the jolt of sensation their innocent touch produced. A wry grin twitched at his lips while his erection jerked in reaction, and quite independently from the orders issued from his brain. The other times hadn’t been a fluke.

“Luke,” he said, a note of caution in his voice.

“I’m sorry to land you with responsibility for Killer. The bloody cloaking device is on the blink again, otherwise we’d come back for her. Just tell her how important it is to be quiet and on her best behavior. She’ll listen to you.”

Oh, yeah? Alex cast a dubious glance at the dog. “I’m not sure this is a good idea. I’m here on business. We don’t have time to watch over your dog.”

Killer barked, “I’m not staying by myself. How will I get food?”

Alex closed his eyes. If the bloody dog didn’t shut up, he’d give her a demonstration of where she could put her damned food.

Alex sucked in a breath, ready to tell Luke what to do with his devil dog. “But I don’t-”

“Damn!” Alex peered at the dog as he handed the phone back to Lily. Funny, he could have sworn the spotted creature smirked.

Alex bit back a curse and wrenched his gaze off her plump, kissable lips. But even so, the thought slid into his head. The area was also private. A vision popped fully formed into his mind. And, unfortunately, Lily starred in his dream image. No clothes. Limbs entwined.

A shrill bark jerked him to the present. The dog pushed between him and Lily, forcing Alex to step back. He speared a glare at the furry creature. Perhaps he could sell it to a passing Dalcon trader. Yeah, definitely a solution to ponder.

“ALEXANDRE (previously NEVER SEND A DOG TO DO A WOMAN’S JOB) is a funny sequel to JANAYA (previously TALKING DOGS, ALIENS AND PURPLE PEOPLE EATERS. You can’t miss these books; the whole setup kept me laughing all the way through. I hope Shelley Munro writes another book to this series. I’m ready to see more.” ~ 8/10 Novelspot