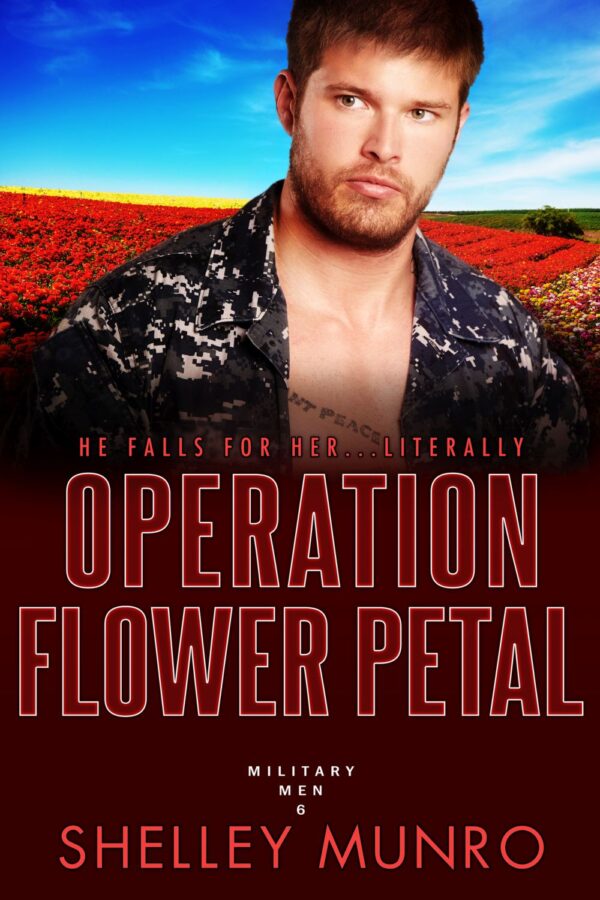 Since her husband’s murder, Ada Buckingham’s life has comprised one calamity after another, and the hits keep coming, yet each day, she picks herself up and begins again.

Military man Matt Townsend, AKA Frog, expects a challenging assignment when he agrees to train soldiers in tough country terrain. The rules: stay away from the old lady’s flowers and notify her of days or nights with flash-bang.

On arrival via parachute, he plummets into the lady’s flowers. The sexy spitfire who confronts him isn’t the maiden aunt-type he imagined, but man, she intrigues and entices him, and he’s eager to learn more.

Matt is quick to insert himself into her life, and his mission evolves once he learns something is hinky and dangerous in the world of Ada. While he fell arse over teakettle, Ada is slower to believe or trust, but Matt is confident in his charm and brings his A-game. Now all he needs to do is keep her safe.

You will love this latest addition to the Military Men series because it contains a charming, confident, and audacious soldier known for his singing voice—not!—and a brave and determined heroine with a love of flowers. You’ll also find skullduggery in a country town, danger, and gossip aplenty. Sit back with a glass of wine and enjoy the romantic adventure. 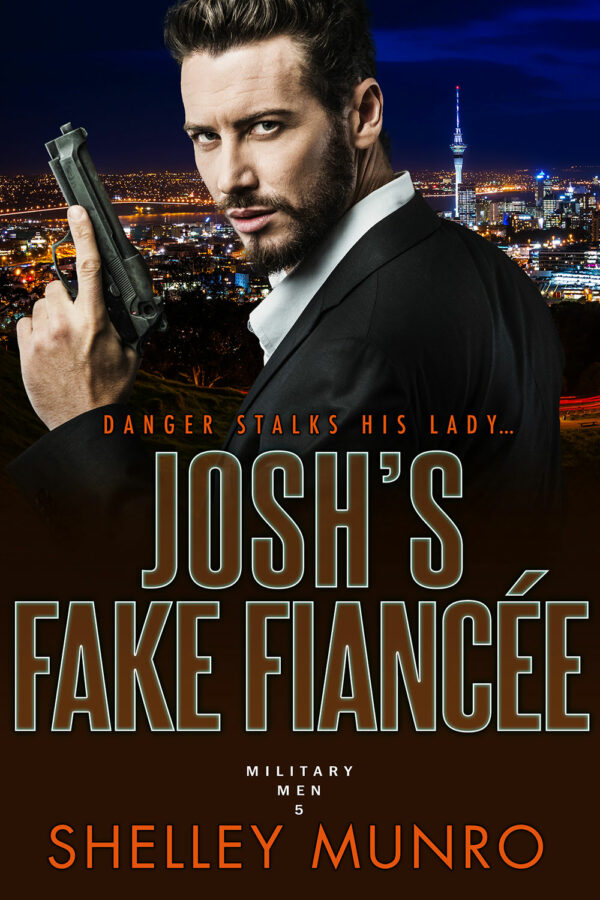 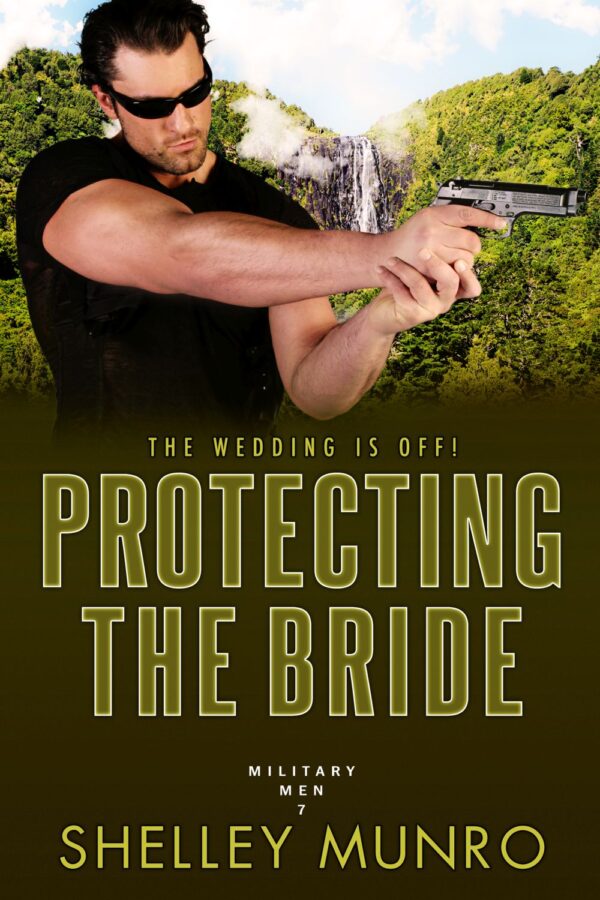 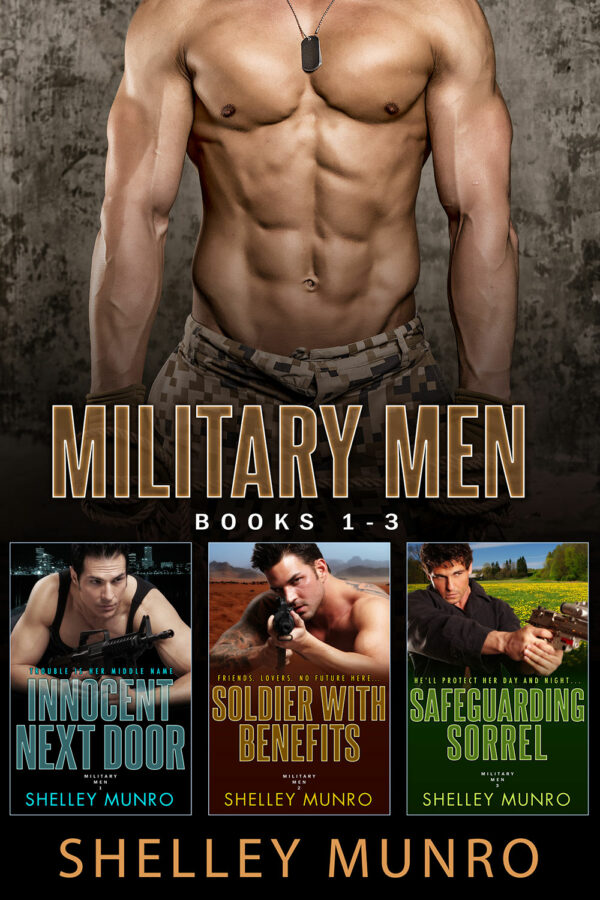 Ada heard the plane fly overhead and stopped work to walk outside. She glimpsed the cat before she lifted her gaze to search for the aircraft. Men or women leaped out, one after the other without hesitation. She shuddered. No way would she ever jump from a plane, even if there was a parachute attached to her back. 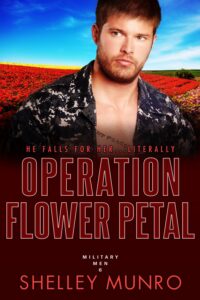 Her phone rang, and after a glance at the screen, she answered. “Hi, Sherry.”

“Oh, Ada,” her neighbor said. “Are you all right? The grapevine says you had trouble at your place last night. Everyone was talking about it today.”

“Huh, that didn’t take long,” Ada said, thinking the mailman had a big mouth. “I’m fine. Someone spray-painted the side of my shed. I took pics and sent them to the local cop. He’s been out to take photos too.”

“You didn’t hear anything?” Sherry asked, concern in her voice.

“Not a thing.” Ada’s skin crawled at the idea of people creeping around her property. The cop had suggested she get a dog, and she was seriously considering this recommendation.

“I’m so sorry. Bart and I had friends over for a barbecue. It was a lovely evening we sat outside until late. Sound travels at night, so I’m certain we would’ve noticed anything untoward.”

“It’s not your fault. I’ve reported the vandalism, and that’s all I can do at this stage. Although it’s frustrating. I don’t know why they’re victimizing me. I keep to myself and never cause trouble.”
Sherry cleared her throat, and everything inside Ada went cold.

No, please don’t mention what I think you’re going to say.

“Do you think this is something to do with Greg’s murder?”

“No,” Ada said in a sharp voice. She was tired of the gossip and the innuendos and the well-meaning people who kept telling her she needed to move on. After all, it had been three years. Greg wouldn’t want her to be unhappy.

“I’m sorry,” Sherry said in a small voice. “You have so much trouble at your place.”

“Not really,” Ada corrected. “The cop I spoke with thinks my problem is teenagers acting stupid. He’s more worried about the thefts in the district. Did you hear? George Carole’s prize yearling bulls have vanished, and the cop told me Meredith and Paul Jones had a quad bike spirited away last night.”

“There was talk at the farmers’ market today,” Sherry said.

Ada turned when someone shouted. “I’ve gotta go, Sherry. Thanks for calling.” She cut Sherry off mid-sentence and started running. “Hey! Hey, you! Don’t land in my flowers. Don’t!” she screeched.

But it was too late.

The parachutist landed in her pink delphiniums.

Ada marched over to a second man who had missed the flowers and was packing his parachute.

“Your boss assured me you’d stay away from my flowers,” she snapped. “You have the entire run of the hill section. The only place I stated was out of bounds were my flower fields.”

“I know.” The man pulled a face. “I’m sorry. A gust of wind caught us. We tried to miss your flowers. Frog, especially.”

Ada glared at the hapless man who was trying to stand and crushing more of her delphiniums. “Stop moving,” she snapped. “You’re making things worse.”

The man froze before turning to gaze at her. “I’m so sorry,” he said in a pleasant baritone. “The wind ripped over the ridge and dragged us off course. The rest of my team landed in the jump zone.”

The man not only had a sexy voice, but he was gorgeous. Tall with broad shoulders. Short, but not too short brown hair. Bright blue eyes. Facial hair that skimmed his chin and framed his mouth…

Muttering under her breath, she ripped her gaze off him and focused on the damage he’d inflicted on her poor flowers. The man and his parachute had flattened dozens of stems. If she worked quickly, she could harvest the blooms before the plants died. Because one glance told her there was no fixing this catastrophe.

“It’s too late,” Ada snapped, incensed over again. Was it too much to ask one thing?

The man studied the flowers and frowned. “I truly am sorry.”

Ada glared at him, her mind busily working on a way to get him out of her flowers without inflicting more damage.