The theme for this week is A Sexy Morning. Don’t you just love it when you see characters have a snuggle down day that starts with an awesome morning? Or how about making love at dawn on a planet far away? Or watching the morning sky together for the very first time as the sun tops the ridge?  This is a theme about that special time of the day where only lovers go. Do they wake up next to each other and wonder how they got there? Or are they all over one another?

I’m a bit of a rebel, which is probably not a surprise to my husband. My excerpt comes from Captured & Seduced, the first book in my House of the Cat series. Camryn, my heroine, is fighting a losing battle trying to keep Ry at arm’s length, and she wakes up with a hangover and Ry. But that’s not the bad part…

The others started to stir. Camryn grabbed her clothes and turned her back on him to dress. Ry watched her the entire time. She felt it, fingers clumsy in her self-consciousness. The spot he’d touched on her shoulder itched beneath her tunic.

Rustling clothes behind her indicated Ry was dressing. The instinct to turn and watch almost got the better of her. Almost.

“Ah, you’re awake,” Mogens said, coming from inside the tender. Camryn noted his clear disapproval before he lifted his head to scan the angry green clouds low on the horizon. His face darkened rapidly. “Bad tidings in the clouds.”

Camryn fidgeted, her shoulder itchy and irritable beneath her clothes, the sullen trot-trot-trot in her head adding to her misery.

Tsking, Mogens studied her instead. “What is wrong with you, child? Have you been bitten by an insect?”

“Um no.” A weird sort of insect to leave tattoos while a person slept.

“Let me see,” Mogens said. “The last thing we need is for our trainer to become ill.”

“Show Mogens.” Ry’s soft voice came from behind. It wasn’t a request.

Camryn turned her back and allowed Mogens to lift her shirt. Chill bumps chased across her skin, blown by the cool morning breeze.

A hiss escaped the seer. “Ry, I told you to leave her alone. Too late now.” His eyes rolled back in his head and his high-pitched voice danced up and down in a singsong pattern. “The ghost walks beside you still. He has not left and will not leave while you need him. Bad day. Bad tidings.” 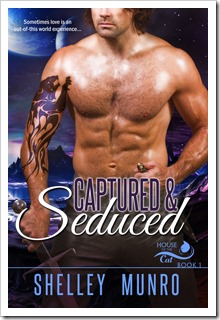 A shapeshifter and a wizard slugging it out, an alien world and a hell-horse…

Jockey Camryn O’Sullivan is an alcoholic on a downward spiral after the death of her husband. When aliens kidnap her, she’s both terrified and reluctantly fascinated by Ryman Coppersmith. She’s positive the weird attraction to her abductor is an anomaly. Something to ignore. She’ll train the aliens’ horse and they’ll return her home. Simple. There’s no need for sex or a stubborn male kitty-cat to replace the precious memories of her husband.

Feline shapeshifter Ry has experienced treachery of the worst kind. When his foster brother—the man who betrayed him—proposes a wager on a hell-horse race, the lure to clear his name is irresistible.

Camryn’s arrival triggers a jump in his already overactive sex drive. It’s a struggle to keep his hands off his beautiful captive. Something in his mysterious feline background compels him to chase her and the passion firing between them soars out of control. Ry doesn’t understand the mechanics of their attraction but knows he can’t afford to lose Camryn…despite his promise to return her home.

To visit other My Sexy Saturday snippets, follow the links below: