We’ve had another hot day here in New Zealand. The weather people keep saying it’s going to rain but it hasn’t happened yet. Bella has taken to sleeping on the tiles at the front door (which is generally open) or she sleeps upside down with all her legs sticking in the air. 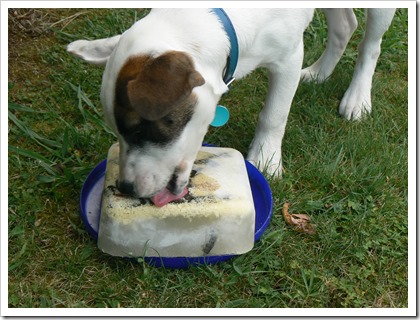 In the middle of the day we’ve been giving her an ice block to help her cool down. I blogged about ice blocks for dogs a few years ago. You can find the dog ice block post here.

My sister murders electrical appliances. It’s becoming a family joke. She’ll purchase a phone or a television or a computer and something goes wrong with it. The battery dies, it blows up or mysteriously stops working. She’s never rough with her gadgets, but for some reason they whimper and die after living at her house.

Last year my husband purchased a new iPad, and he gave his old one to my sister. She hadn’t used it until this week when her Android tablet stopped charging without warning.

She rang me up and said, “My tablet has stopped working. I’ve charged the ipad. That seems to be working, and I’ve turned it on but now I can’t turn it off. How do I turn it off?”

“Oh,” I said, and I was thinking her electrical voodoo has struck again. “Well, you can let it turn off on its own.”

“All I want is a gadget to read my books on,” my sister said.

So I talked her through how to delete hubby’s books and get her books onto the iPad. The next problem was a wi-fi connection because that isn’t working either at my sister’s place. I tell you – she’s hell on anything related to a gadget or appliance. Their phone is very unpredictable too!

Today she rang me to let me know she’d managed to download all her books. The off button still wasn’t working but the ipad flicks off after five minutes. She’s a happy camper.

We’ve decided I need to write a character who suffers from the same malady as my sister, and I think I have just the heroine. I feel sorry for her now!

Do you have problems like my sister with gadgets? Do you know anyone else with the same problem?

← 13 Animals and Birds that Mate for Life Let Me Tell You About Sexy Thoughts! →