Let Me Tell You About Sexy Thoughts!

This week’s theme is Their Sexy Thoughts. When characters think about each other in a sexy, exciting way, we as readers adore them. We love hearing about how the hero thinks the heroine is sexy and loving and oh so much more as the story progresses. As writers, we love putting those words down and getting them just right.

I thought I’d give you a short scene in the heroine’s point of view. She’s arrived at the space port to meet her date, one arranged via the Interplanetary Love dating agency. As in all the best romances, things don’t go quite as she expected…

Carly noticed the man straightaway. So did every other female in the spaceport, but his attention remained on the petite beauty at his side. He didn’t appear to detect the heated whispers and come-hither looks from other women. A pang of envy pierced Carly. He was taller than her own six foot and dressed completely in black. He’d slicked back his black hair and the style showcased the angles and shadows of his face. The curves of his sensuous lips looked perfect for kissing.

Sighing, she turned her attention to the woman. Lucky lady, Carly thought as her gaze strayed to the man again to steal another hit of his hot sensuality. A shiver slid down her spine, delicious and naughty. Better than a morning shot of java.

A woman just had to look at this man to know he’d be great in the sack. It was the way he held himself, the way he walked, all languid and lazy. It was in the charming smile and the dimples winking at the corners of his mouth, which muted the first tough-guy impression. Carly resisted the need to fan herself. Oh yes. She wanted one of him in every flavor.

Carly gaped as the petite woman who’d walked in with Mr. Hunk opened her arms and ran toward her. It was like a romantic scene from a corny movie—one lover racing toward another—and all Carly could think was she’d ticked the box specifying a heterosexual male.

She was sure of it. 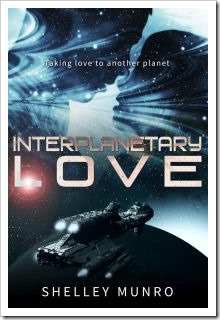 Taking love to another planet

I know your secret…

Ekim Ramuk is a vid-star on the planet Nidni. Along with fame and currency comes his reputation as Nidni’s greatest lover—one that causes him acute embarrassment and anxiety because not one of the rumors is true.

Carly Abercombie is an Earth cop who works long hours and craves a man to hold her in the small hours of the night. She doesn’t require perfect. Mr. Almost Perfect will do, but finding him—that’s another problem entirely. In desperation, she signs up with Interplanetary Love and heads off to Nidni to meet her first date.

Rala Ramuk, Ekim’s baby sister, has problems of her own. Her brother! Determined to marry him off so she can move forward with her own life, according to Goddess Peti’s rules, she’s signed Ekim up with the Interplanetary Love dating agency. Anything to secure her future.

A vid-star, a cop and a matchmaker. Three strong personalities, all determined to win. Let the dice roll and the fun begin…

Warning: This book contains a tongue-in-cheek plot, a little purple-tinged prose and a man-part named Rajah. You have been warned.

To visit more My Sexy Saturday snippets follow the links below: