At long last—a new addition to the Military Men series.

The Military Men series features three NZSAS soldiers who met during training and became close friends. There is love, adventure and a good dose of humor in the first three books. The heroes are all military men and their heroines are equally strong with a side of sassy determination.

I’m really excited to show you the latest cover in the Military Men series. Stranded with Ella features Dillon Williams (Summer’s brother) and Ella Liddington-Walsh, a woman with pink hair and a love of vintage clothing.

And NEWSFLASH, there’s a giveaway to celebrate my cover reveal. Scroll down for details! 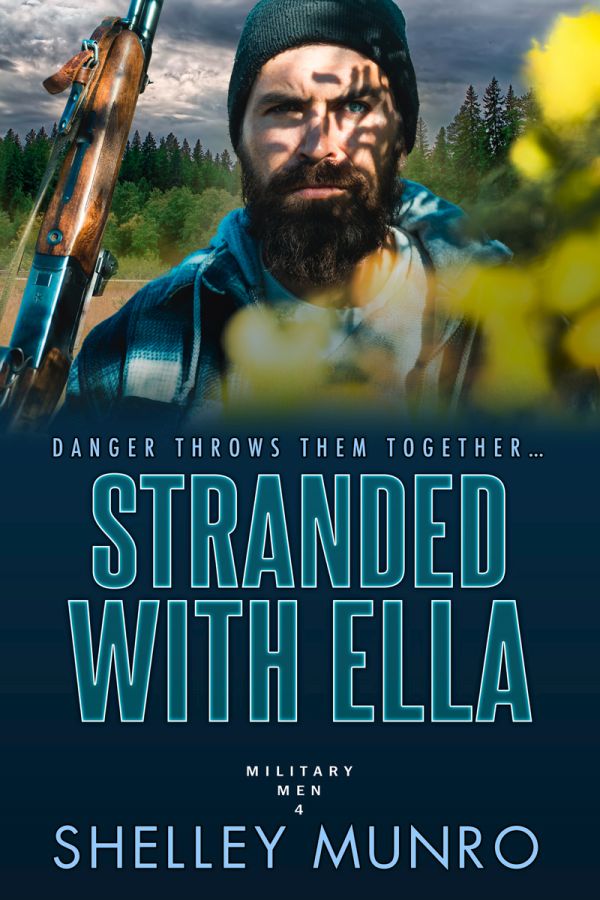 Here’s an excerpt from INNOCENT NEXT DOOR that introduces Dillon and his brother to the reader. Note: There are a few F-Bombs in this particular excerpt.

“Summer!” a masculine voice hollered. The angry sound echoed and bounced off the walls in a too-familiar manner.

“Oh, no,” Summer muttered. Somehow, she didn’t think closing her eyes and pretending she was asleep would solve this one.

Nikolai slithered from the bed and pulled an ugly-looking gun from under the bed.

“Don’t go. Did you lock the bedroom door?”

“Summer!” The second voice sounded a shade deeper but just as angry.

“Shit, there’s two of them,” Nikolai said, and he grabbed his jeans and yanked them on.

Nikolai cast her a strange look, but the thump of heavy boots outside the bedroom forestalled his questions.

“Don’t come in!” Summer shrieked. “I don’t have any clothes—”

The door burst open and crashed against the bedroom wall. Two huge men paused at the threshold, and the four of them stared at each other with varying reactions.

Yep, this was a situation that called for a stronger word than “shit”.

She tugged the covers up to her chin and considered crawling right underneath to hide. She thought about it for all of two seconds and cast away the cowardly idea. Someone needed to referee. She was the lone candidate.

“What the hell are you doing?” Dillon, her oldest brother, roared. He balanced lightly on his toes, his biceps bulging beneath his T-shirt. His dark hair stuck up, appearing as ruffled as his temper.

Josh, her other brother, folded his arms across his broad chest. He didn’t smirk but the glint in his baby-blue eyes said he wanted to. “Oh, it’s obvious what they’ve been doing,” he drawled, confirming her supposition. The louse thought this was funny.

“Tarei.” A pulse throbbed at Dillon’s temple, and he looked as if he wanted to haul Nikolai from the room and beat him to a pulp. “Jake said Summer was here. Didn’t expect you too.”

Summer swallowed despite her best efforts to keep her anxiety contained. Her week just kept getting better. Murder, a little sex, and a fistfight chucked in for good measure. She had it all. Who needed to read the Sunday tabloids?

“I don’t want to think about my sister and sex in the same sentence,” Dillon snapped.

“Especially with him.” Josh shifted his weight and clenched and unclenched his fists. The ever-present humor in his baby-looking face riled Summer. Time to take control.

“Out,” she snapped, trying to ignore the fine tremor of nerves that shook her limbs.

“Fine.” Dillon glared at Nikolai. “He can come with us.”

“I don’t think so,” she returned sweetly. If they laid one hand on Nikolai, so help her… She would Tae Kwon Do her two soldier brothers. “Nikolai stays with me.”

Dillon and Josh exchanged a glance.

Summer narrowed her eyes. “He stays with me. He’s seen me dress before.”

“I don’t think they want to hear that, sweetheart.”

“Fuck, no.” Dillon jerked his head toward the door. “Out, Tarei. You’re coming with us.”

“You do know Nikolai?” Summer glanced from brother to brother. Their hard faces gave away little, but she guessed they weren’t telling her something big. Fine. She’d worm the information from Nikolai the minute she got rid of her brothers.

Summer sat and made a show of grabbing the covers. The sheet slipped dangerously close to flashing her nipples.

“Aw, Summer!” Josh said, starting to back away. He grabbed his brother’s arm and yanked.

Dillon resisted until Summer made another move. “The kitchen in five minutes,” he ordered. “A second longer and we’ll come back and drag you out.”

Her brothers exited the room, their remarks to each other peppered with enough swear words it was a wonder her mother didn’t make an appearance with her bar of soap.

One reader will win a paperback copy of Enemy Lovers, a cute plus Kiwi, and an olive soap that comes complete with an Evil Eye good luck charm all the way from Greece. (It’s the bar of soap Summer needed for her brothers!)

The giveaway is open to all readers including International. Complete the rafflecopter below with at least one of the options and you’re in the draw! 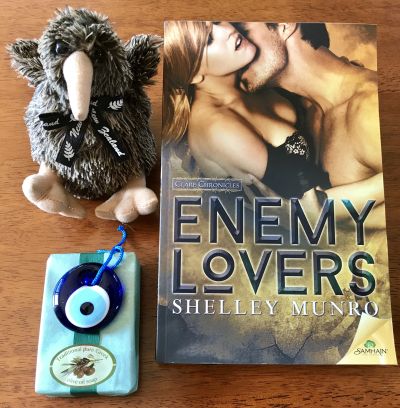 ← Owls ~ The Research and Maori Lore Chilling Out With The Hippopotamus →