House of the Cat, Book 6

A pilot on the run. A warrant-taker determined to make a capture. The mating-dance that threatens to destroy them both…

Warrant-taker Jazen Lav accepts one last assignment before she retires to follow her dreams. She’s hot on the trail of a runaway cyborg, but the path leads to the crew of the Indefatigable and they’re a tight-lipped bunch. Frustration steers her to an undercover gig as a nurse, which places her in the sights of the flirtatious Indy pilot.

Nanu left his home planet at a young age, missing the last crucial elements of his training before he hit adulthood. The inner beast he thought dead leaps to life on meeting Jazen, taking him by surprise and tossing him into confusion. His inner beast insists Jazen is his mate, but she’s trouble for him, trouble for his friends, trouble for his future.

Abduction and betrayal—not the best way to start a courtship, and that’s where the turmoil begins since danger stalks into the city with Nanu and Jazen directly in its sights…

Nanu scowled at the controls of the tender, the needle of the navigation unit flicking from side to side, testy as a grumpy shifter’s tail. The tender vibrated with unusual vigor as they flew high above a jagged mountain range. 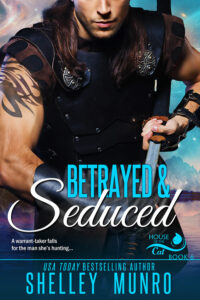 Nanu forced a smile despite his gut doing one of those Highland flings Camryn had described—a strange Earth dance.

“Nanu?” Ransom, the chieftain of the dragon shifters who lived on the planet of Narenda, prompted him for details Nanu didn’t want to deliver.

Instead, he scanned the pulsing, protesting instruments, willing them to revert to usual behavior. It wouldn’t do for something to go amiss during this flight since the dragons were their biggest customer.

Please, please even out.

Minutes ago, everything had appeared normal. Phrull, if he crashed with an important customer on board, he’d never hear the end of it from his friends who flew with him on the Indefatigable.

“Are we almost at the mine you spotted?” Ransom scanned the peaks far below them, unease tightening his broad shoulders, a pained frown etched into the face Nanu’s friend Kaya mooned over every time they visited Narenda.

“Yes, another five minutes flying and we should spot the mine. The scar in the mountain isn’t clear until you’re flying overhead.” Nanu studied the navigation unit with increasing unease. The directional needle continued to waver, and instinct told him the reading was no longer true. They were losing altitude even though the instruments showed otherwise.

“Why are we flying lower?” Ransom demanded. “We agreed to fly above the mountains, not skim them. The resonance from the Narendanite is pulling at my dragon. Are you trying to weaken me?”

“No,” Nanu snapped. “The instrument readings are correct but something is shonky. Phrull it. We are losing altitude. I’ll fly back to base and correct the problem with the navigational system.”

Without warning, Ransom white-knuckled the copilot’s chair. His face paled, and he started to hum, a discordant tune that prickled the hair at the back of Nanu’s neck.

Alarmed, Nanu gripped the controls and switched to manual. The tender bucked and plunged, throwing Nanu and Ransom against their harnesses. The beads on the end of Nanu’s dreads clacked together in a jangle that fit with Ransom’s crazy humming. Nanu flipped through the manual in his mind, pulse jittering as he struggled to correct the flight path and regain altitude.

Nothing happened. If anything, the gravitational pressure sucked them closer to the mountain peaks.

Nanu checked Ransom. The big dragon shifter twitched in his seat, his eyes rolling. Phrull, this was not good. His weird humming increased to a high pitch that made Nanu’s ears ache.

Nanu jabbed the comm. “Alert. Alert. Kaya! You there?”

Despite Nanu using every bit of his strength, the controls didn’t respond. Something or someone was drawing them closer to the land. Nanu gritted his teeth, biceps bulging as he fought the controls. The minerals in the rocks sparkled and drew his eye, reminding him of stars. He’d always enjoyed his flights over the Narenda mountains, never had a problem. Until today.

Kaya’s voice crackled through the comm, but her words made no sense.

The sharp spine of the mountain peaks grew closer. Nanu scrutinized the ground. Ahead. Yes. It was the weird area the mystery persons had mined without permission, the area Ransom had been so eager to view he’d risked facing the perilous resonance the mountain emitted. They’d assumed flying over at a great height would keep Ransom safe.

The comm crackled and died. They were level with the higher peaks now. Crap, could he keep the tender steady long enough to reach the huge, flat area of the mine? He, Kaya and Ry, their captain, had landed there the day before, so he knew the area was large enough for the tender.

His teeth clenched so tight his jaw hurt. His left hand raced over the controls as he attempted to guide the tender with brute force. It wouldn’t stop them from crashing but he might control the impact.

Ransom groaned and twitched. Too busy to worry about the dragon shifter now, he fought gravity. The tip of their tender wing clipped the mountain, flipping their vehicle into a wild spin. For a sec, Nanu gained control but a gust of wind sent them bouncing into another sheer peak. Metal struck rock in a pitchy shriek. They plummeted below the walls of the mining zone. No safe landing this time.

Nanu did everything in his power to avoid crashing, tried every trick he’d learned during his years as a pilot. Nothing worked.

They struck the ground hard. The impact flung Nanu against his harness hard enough to smack the air from his lungs. The tender scraped across the smooth stone and smashed into a wall of rock, coming to an abrupt halt at an uneven tilt, the engine roaring like a dragon in a temper. With a trembling, sweaty hand, Nanu switched off the power.
Silence fell.

He groaned and dragged in a breath. It hurt, a pained throb reverberating through his skull. Lifeforce trickled down the side of his head, and his dreads obscured his vision. He unfastened his harness and wriggled free. A peek through the viewport showed him they’d been lucky, the wall of rock stopping them from plummeting down the side of the mountain. Instead, they’d landed in a natural bowl. It could’ve been worse. Assured that their tender wouldn’t be going anywhere without help, he checked on Ransom.

The dragon shifter was breathing. A good sign. Nanu shook Ransom’s shoulder, but the shifter didn’t budge and remained unconscious. At least that weird humming had ceased. That had been plain creepy.
Nanu tried the comm.

Sighing, he hoped Kaya had been paying attention and contacted Ry before Ry left with their other male friends on their boys-only excursion. They’d talked about this trip for cycles since they intended to hunt in feline form and live rough. A rest from women and babies, they’d told Nanu.

Nanu crawled through the crumpled remains of the tender and attempted to force the door. It creaked a protest and gave with a suddenness that took him by surprise.

Nanu toppled out, falling awkwardly. His leg bent the wrong way as he struck a rock. The bone cracked, the instant pain shifting his vision to white then black at the edges. The hard embrace of the ground forced the air from his laboring lungs, and it was the last thing he remembered.

“Betrayed & Seduced is one hot and fascinating read! The Indefatigable crew is back and I couldn’t be happier as the story starts off with an exciting event and keeps the thrills coming from there.”
~ Stormy Vixen Book Reviews