House of the Cat, Book 2

Shapeshifter Prince Jarlath Leandros of the planet Viros is a man who understands duty. As heir, he’s had his future as leader of the House of the Cat mapped since childhood. Boring! Jarlath yearns for an indefinable more.

Keira Cloud is beautiful and sexy, she’s independent and confident, and not only is she an enemy from the House of Cawdor, but her stepchildren accuse her of murder. Not a suitable woman for the prince, but Jarlath aches to claim her.

When the House of the Cat comes under attack, Jarlath is thrust into the middle of danger where life or death is the only option. A war is brewing, one that brands Jarlath and Keira enemies, yet their hearts shout otherwise and their animal selves—the leopard and the crow—care nothing for conventional barriers. Right or wrong, passion blooms out of control and with the city under siege soon Jarlath’s life is anything but boring. Now all he needs to do is survive…

“You will choose a wife and marry before this cycle ends. You must follow tradition and do your duty.” 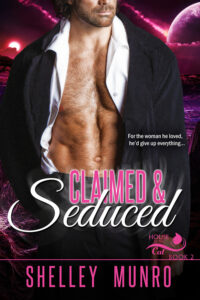 Prince Jarlath Leandros of the planet Viros scowled, loathing the demand in his memory as much as he’d disliked hearing the command from his parents in person. A blur of activity in his peripheral vision jolted him, and he signaled Black, his cambeest to halt.

“Halt, beest.” Impatient with the order, Black danced on the spot, the broad leathery pads of his feet thumping the ground, and Jarlath curled the fingers of his left hand into the shaggy fur of the beest’s hump, just in front of his padded saddle to calm him. Glad of the distraction from his militant thoughts and memories of his mother’s piercing voice, he peered through the maze of black tree trunks and the tangle of green-and-pink undergrowth.

Brigands or something more innocent?

“Prince? Is something wrong?” Ellard Tetsu, his security guard, pulled up beside him, a heap of dried pink leaves from the overhead trees crackling beneath his beest’s feet. Dubbed the feline shifter with a face only a mother could love, he possessed steadiness and competence. Others might poke fun at his large nose and the ears that protruded a fraction too much, but Jarlath spent much of his time with this man he called best friend. Ellard’s tan cambeest snorted a protest and shook his shaggy head at the delay to their normal routine.

“I thought I saw something.” Jarlath scanned the scrubby bushes a second time. Rather than alarm, unusual curiosity poked at him. Him—the man his younger brother insisted was laughably predictable and always, always did the right thing.

I bet you fukk your women in the same position, at the same time of night, on the same mark of the week-cycle.

Lynx’s mocking words still stung like a bumble-wasp. Truth—his brother had the right of the situation. He lived in a deep, dark rut. Grata fire! He and Ellard were riding the exact path they followed each day.

Ellard narrowed his bright green eyes and perused the vicinity with his usual stoic confidence. “I don’t see anything.” He shifted his huge frame in order to study the path they’d already traversed.

“Where does this track go?” Jarlath demanded, his tone abrupt as he pointed to a fork in the trail.

“We’ll go that way for a change,” Jarlath said and urged his cambeest into motion by squeezing his legs against the barrel body of the creature.

“Wait! Jarlath, that’s not a good idea—” His friend broke off with a curse, and Jarlath heard Ellard’s cambeest crashing after him. “At least let me go first,” Ellard called.

He found himself grinning. Ellard had called him Jarlath, and his friend didn’t do that often, which told him the departure from norm was overdue. Maybe this was the reason he’d felt dissatisfaction, the reason his resentment of his younger brother had swelled and festered, the reason his temper stirred with little prodding.

“Jarlath! You should let me go first.”

He ignored Ellard, examining their surroundings instead. Ah, there was someone on the path. The disturbance wasn’t his imagination. He signaled his mount to slow but the cambeest increased his speed.

“Halt, beest!” Jarlath shifted his weight and hauled on the harness reins.

Black ignored the command and bolted, the cool air whistling against Jarlath’s face. His cambeest shot past a tree. Too close! Jarlath gritted his teeth at the friction of leg and coarse trunk. Pain reverberated down his limb. He gripped Black’s shaggy hump with pincher fingers to right his balance. “Stop, you cantankerous beest!”

Without warning, Black screeched to a halt. Jarlath shot forward, flipping over his beest’s head. His world slowed, lurching back into place when he struck the ground. Packed earth and gravel punched his head, his shoulder, smacked the breath from his lungs. Fire burned along his cheek. He struggled, wheezed to get air. A groan rippled up his throat as he lay there. Then a familiar snort had him attempting to move. Pain streaked along his arm, and he realized he still held the reins.

A murky shadow obscured his vision. Jarlath squinted, desperate to see the source of the musical accent. Another breath sawed down his throat. The roar in his head subsided to a dull throb that sat behind his right eye. Flowers. He could smell flowers. Something cool stroked his cheek, wiped across one eyelid and the darkness lifted. He blinked. Once. Twice, and his world came into sharper focus. A woman? A third blink brought the shimmer into one unwavering vision.

“I Absolutely Positively LOVE Shelley Munro’s writing… She’s a Stellar 5 STAR Writer!! Her Stories are Witty, Entertaining, Filled with HEAT, Packed with Action, & are Guaranteed to Please your senses, ALL while delivering a HEA or HFN ENDing that the Romantics in us Dream of, search for, & of Course… Absolutely LOVE!!”
~Leah Rowe, reader