All roads lead home at Christmas…

Cyborg Amme Vanak is wired to care for children and since her current charge is grown, she’s feeling edgy. She’s hoping a Christmas visit to Earth with her friends will offer distraction and maybe even a fling with a sexy Earthman before she flies on to Viros for a new adventure.

Wealthy entrepreneur Marcus Polo is single with a rockin’ social life until an unexpected Christmas gift throws his existence into chaos. A chance meeting with exotic Amme deepens his turmoil. She might be the solution to his problem, but she’s different from his exes, and she pushes every one of his sexual buttons.

Amme is torn. Marcus Polo is handsome and kind and so, so attractive. Even better, it seems the fascination is mutual. Amme is having a ball on Earth, but as departure day creeps closer, she becomes increasingly conflicted about leaving. Then there’s the whole alien thing. Somehow, she doesn’t think Earth and Marcus are ready to accept aliens are fact and not science fiction.

Warning: Contains a bunch of aliens intent on relaxing and enjoying a New Zealand Christmas, some canoodling under the mistletoe and addictions to chocolate.

“Do my ears look pointy in this?” Kaya asked, cocking her head so her blue hair swung away to reveal a jeweled ear cuff. 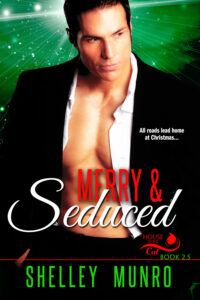 “Very funny.” Camryn O’Sullivan plucked at her hair in telltale irritation.
“Tell them, Ry. None of them are taking this seriously. Earth isn’t ready for aliens. It’s gonna be bad enough facing my brother and his wife again after all these months. I don’t want to worry about the population of New Zealand panicking because they think it’s an alien invasion.”

Amme Vanak stood in the background, leaning against a wall of the flight deck of the Indefatigable, a smirk tugging her lips. This argument had been ongoing ever since Ry announced they’d visit Earth for Christmas. A summer Christmas since they were going to the southern hemisphere, and she couldn’t wait. The conversation never failed to entertain her, and she suspected the crew enjoyed teasing Camryn.

“What do you say, Amme?” Nanu, the ship’s engineer and pilot, drew her into the discussion. The beads on the ends of his braids clacked as his attention shifted from her back to Camryn. “Do you want to do some sightseeing on Earth?”

Of course she did. “As long as I can regulate my skin tone.”

Her cyborg nature allowed her to change her skin tone to blend. Her other characteristics were less noticeable. When she was a child, the categorization committee on her home planet of Sheng had determined she would profit their society most by entering the profession of childcare. Then, like all children on Sheng, she’d undergone enhancements to complement her natural inclinations. Her enhancements included increased empathy for children, the ability to think and learn quickly, extra physical strength and stamina to keep up with the young and fend off attacks on her charges if necessary. Perfect eyesight. Excellent hearing. Perfect health and antibodies added to guard against most known diseases. On Earth, she’d appear humanoid. She was luckier in that respect than Kaya with her pointed ears and bright blue hair or Gweneth with the cat tattoo on her cheek and Mogens who flashed from black to white depending on his mood.

“I have the solution for those of us who don’t appear humanoid.” Mogens violet eyes sparkled in his white face—an indication of happiness and contentment. “Never fear. We shall all visit Camryn’s family. We shall have fun. I have read this in the clouds.”

A spurt of excitement fizzled through Amme, and she grinned at Mogens. Camryn had told them so much about Earth, and they were eager to explore and experience a New Zealand Christmas. The southern hemisphere. Hot weather. Beaches. Barbecues.

“What sort of solution? Have you trialed it?” Camryn asked, suspicion coloring her tone while her gaze sliced and diced, forging a path to the truth.

“On myself.” Mogens’ long broad nose lifted in a show of dignity. “My appearance represents the biggest challenge since it fluctuates from black to white and in between. The cream I’ve developed turns my skin a golden brown. If I change my robes for those things you called jeans and a T-shirt, I’ll pass as a human.” He winked at Amme.

Amme felt her mouth drop open. Well! Mogens was very pleased with himself.

“Fine, that’s one problem solved, but where are you going to hide the Indefatigable?” Camryn asked, spearing each of them with a glower in turn.
“You can’t just park it in the middle of a paddock and leave it there. My brother is going to notice. His employees and neighbors are sure to remark on a hulking big spaceship parked on the lawn.”

“Nanu and I have a plan,” Mogens said.

“Of course you do,” Camryn said drily.

Ry placed his hands on Camryn’s shoulders and pulled her against his chest. His handsome features held a wealth of tenderness as he stroked his mate’s shoulder and arm. “Stop worrying. We have the Indy covered. No one will come upon our ship. I’ve told you this. Your brother will be pleased to see you.”

Amme moved forward to stand beside the woman who’d become a close friend. They’d spent a lot of the voyage together, discussing their lives and sharing personal experiences. “Of course he will. Once he gets over his shock, I’m sure he’ll be excited to see you. Are you going to tell him about becoming a feline shifter? That you’re no longer fully human like him because you mated with Ry?”

“Maybe.” Camryn’s brow creased then she pulled away from Ry to pace back and forth in front of the view screen. Her boots beat a tattoo on the bridge floor, the sound becoming increasingly rapid as her mind wrestled with her fear. “I guess. He’s not going to believe a human can turn into a black leopard without a demonstration.”
Amme exchanged a glance with Ry.

“Let’s go and workout,” Ry said. “It will rid you of some of your nerves.”

“If workout is code for sex, then I’m staying here to help Nanu,” Jannike, Ry’s second-in-command said. Built like an assassin warrior, the tall blonde woman maintained a serious mien. Most thought she lacked humor. Amme knew better. The woman hid her humor bone and soft heart. She often acted the champion for those who were weaker and unable to stand up for themselves.

Camryn’s troubled gaze swept them, and she let out a huge sigh. “This visit is going to be a disaster. I just know it.”

“This is a very entertaining and enjoyable read. A fun and emotional sci-fi holiday romance. I t was very easy to fall under Amme and Marcus’ spell. I loved their chemistry and emotional connection. The storyline had lots of charm, drama and sweetness.”
~ Bookbub reviewer

“I have to say I love the crew of the Indy and it was such fun to have them back on Earth for a bit. Lots of smiles, romance, intrigue and enough excitement to keep me reading longer than I should have done!”
~ Amazon reviewer

“I LOVED every second of this book, from the moment Camryn & her brother Max see one another it’s nothing but fun to read. The interactions between Camryn’s Earth family & her family that is the crew, is wicked, then you through in Marcus & his daughter, just WOW. This is one holiday tale you need to read, especially if your a paranormal or alien genre fan. You learn more about the other crew members in this book which I loved, but what I loved more would have been the total child-like enjoyment the crew had in experiencing Christmas for the first time. I can’t wait to be able to read what happens next in the “House Of the Cat” series.”
~ Amazon reviewer