House of the Cat, Book 4

When she arrives on the planet Viros, Gweneth Swithin takes one look at royal bodyguard Ellard Tetsu and her inner feline—the one she didn’t know existed—falls for the silent, alpha shapeshifter. She’s thrilled and excited at the way her half-feline side has made her existence known and trusts her instincts when it comes to Ellard. He is her mate, and maybe she can have it all…if only the stubborn male would stop running.

Ellard can’t understand why the young and beautiful Gweneth is interested in him when she could choose one of the many handsome or powerful males who reside in the city, one who is whole and possesses both arms. Despite the attraction he feels, he makes himself scarce, but Gweneth has a plan to stake her claim and isn’t above maneuvering behind the scenes in order to have a second chance with Ellard.

A royal assignment, undertaken together, changes the stakes into an adventure that can make or break this fledgling relationship…if they manage to survive.

Warning: contains a headstrong virgin heroine and a handicapped hero, a ghost or two and alien villains. Mix and see the sparks fly. 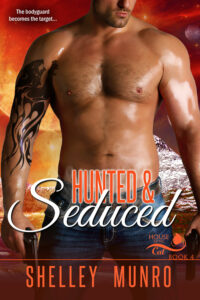 Ellard Tetsu’s nostrils flared and a shudder zapped down his spine, each of his feline senses under assault. A sneeze built and built until it exploded free with cosmic force. He wiped his streaming eyes and stalked along the corridor linking the public reception area in the castle to the council meeting room, his blurry gaze sweeping every small alcove he passed in case it harbored a woman—one of the Indy crew.

One of the unpredictable females who seemed out to get him this cycle.

Flowers. Stinky flowers and a maze of chemicals followed him as close as a tail. He stunk, positively reeked of floral scent. No chance to change before the council meeting commenced. He’d already been running late due to a training snafu when those women had accosted him with perfume bottles. Grata! He lifted the hem of his tunic with his Stores—his artificial right arm—and promptly sneezed again.

Those women were a phrullin’ menace and Gweneth Swithin…

For once, her beautiful and mischievous face remained absent and he scanned the alcove to his left, every instinct alive with suspicion. She wasn’t hiding behind the feline statue. The fact should have relaxed him, but then he wondered where she was, what she was doing, and worse, who she was gifting with her presence.

His feline stirred beneath his skin, agitated at her absence while he—the man—was glad. She…no! He increased his pace and jogged the remaining distance to the House of the Cat council room.
The ornate timepiece, imported by the previous queen at great expense from the planet Tempo, rang out the cycle portion, the tiny jeweled figures within the dome jerking into a programmed dance. He burst into the council room and came to an appalled halt.

As he’d suspected, he arrived last. His brother and friends wore irritated expressions while the council members already sat around the large oval table. A variety of refreshments covered the surface and the more efficient males had readied their personal comp pads to take notes. Light and heat poured through the floor-to-ceiling windows and the stink of the perfume made his nose twitch in a familiar manner. A sneeze burst free before he could get out a greeting.

“Ah.” Prince Jarlath, Ellard’s closest friend grimaced, his handsome face frozen as he attempted to breathe yet not smell the stench. “They sprayed you too.”

Beside him Lynx, the current king, and Shiloh, Ellard’s brother, were bare-chested, their tunics dumped in a heap in the far corner of the room.

Ry Coppersmith, the tall and fit captain of the Indefatigable and a new addition to the Viros council, added his tunic to the pile of laundry. The feline shifter, formerly of the planet Ibrox, let out a snort that held a smidge of humor. “Stinks like an Ornum whorehouse. What were they thinking?”

Six council members sat around the cloth-covered oval table, their expressions ranging from irritated to distasteful. Ellard caught the beginnings of a smirk from a younger one.

Unable to stand the pungent flowery scent a sec longer, he whipped his tunic over his head and tossed it into the corner with the others. If he wasn’t so irked with the women’s prank, he might have celebrated the way his Stores cybertronic arm moved so fluidly. After coping with one arm for portions of the last rotation, the Stores made him feel normal again. Most strangers never noticed his artificial limb, despite the lighter gold, which didn’t quite match his natural skin tones.

“I’ll ring someone to remove our tunics,” the secretary, one of the six council members already seated, suggested. He rose and stalked to the newly installed com system, his back rigid in distaste. A sneeze burst from him as he stabbed the call button for a servant.

Ry opened every window and door but the stillness of the cycle and the balmy weather seemed to intensify the stench.

Shiloh edged closer to him, his nose wrinkling. “Phrull, they got you good. How is the arm? Apart from the slightly paler color, it blends well with the stump. I can’t see much of a joint.”

Ellard flexed his artificial arm, still amazed at the real sensation. Initially, he’d hesitated about going through with the operation because the medics told him it was a one-time thing. If something went wrong, the attachment method meant…no! The chances of failure or catastrophic loss were low. The medics had assured him of that. “Almost as workable as my other one. I’m doing the exercises the cybernetic man told me to complete each day. The worse thing is having to compensate with each shift since it doesn’t transform. They’ve designed the arm so I can remove it before a shift. Almost knocked myself out the cycle before when I started my change before I remembered to detach the Stores. I thought Jarlath was gonna split his sides laughing.”

“I heard.” Lynx joined them and slung a casual arm around Shiloh’s shoulders.

He stared for a sec, still amazed his brother was mated with the king of the House of the Cat and a woman—a commoner and a previous slave. Things were changing rapidly on Viros, and while some of the elders and a rebel faction of naysayers preached about tradition and maintaining the same course they’d always followed, Ellard thought life had improved. He had friends—loyal companions—but the new informality at the court was taking time to become used to—at least for the older felines. He numbered a prince, a king, a duke and a queen amongst his friends, and they insisted he call them by their names instead of their titles.

The previous queen—Jarlath and Lynx’s mother—hated the changes so much she’d moved from the castle into an expensive home adjoining the castle grounds. She spent a lot of the rotation off-planet visiting friends since her mate had died. Yes, things were different now.

A brisk knock on the door heralded the arrival of a cheerful servant. He stepped into the room and promptly sneezed, the sound explosive and sudden, his spiky black hair and bright green eyes reminding Ellard of a ruffled cat. “Ah, what is that stench?”

“According to my mate, it is a designer perfume from Earth,” Lynx said. “Please remove our tunics and take them to the laundry for washing.”

“Of course, your highness. Do you require fresh tunics?”

“No, we’ll collect them after our meeting.” Lynx gestured everyone to their seats. “Thank you. Leave the door. We want the stench to disperse.” He stalked to the head of the table and dropped onto a gel-seat.

Ellard took a seat beside Jarlath, a part of him still amazed they thought him worthy of inclusion in the planning sessions.

Lynx studied his comp pad and tapped a few buttons, a silent signal to commence. “Right, now that the spaceport is fully functional we need to attract visitors. We must find a way to bring in people who are willing to spend currency on Viros.”

One of the councilors tapped his pointed turquoise-painted fingernails on the tabletop, his stocky shoulders held perfectly straight. “We need a share of the cash that goes to the casinos on Gramite.”

“Exactly.” Lynx studied each of them in turn, his green gaze serious and intent. “Ideas. Anything. It doesn’t matter how outlandish or how impossible they appear.”

“The workers who have come in from other planets enjoy visiting the colored sands,” the councilor Jarlath had placed in charge of tourism spoke up. “The problem we’ve had is that outsiders have heard of the war between us and the House of Cawdor. They worry they might find themselves in the middle of renewed violence. They don’t want their children playing with ours in case our kittens shift and injure them.”

Shiloh snorted his disbelief, arms folded across his beefy chest. “Our young never shift at that age.”

“I told them that, but they refused to believe me,” the councilor said. “I don’t know how the rumors started.”

Lynx sniffed his arm and grimaced. “What else? Any ideas?”

“The House of Cawdor is holding a gambling tournament soon. It’s a pity we couldn’t entice some of their clientele over here. It’s a short hop.” Shiloh steepled his fingers, his brow furrowed in thought.

A squeak from near his feet drew Ellard’s attention, but he mentally shrugged when it ceased. The herd of women inhabiting the castle was making him jumpy. Gweneth and the others wouldn’t dare interrupt the council meeting.

“I love the House of Cat series, Shelly Munro manages to add new and interesting elements to keep things spicy while guaranteeing readers a very entertaining read with just enough snark and humor. Beware you might find yourself peeking through your fingers at some of the hair raising action, I certainly did and I can’t wait for the next adventure.”
~ Stormy Vixen Book Reviews