House of the Cat, Book 7

Some days, getting out of bed is a mistake…

Kaya Ignatius loves her job, working as part of the Indefatigable crew. But this isn’t a normal morning. Gryffnn Drake, a hunky dragon shifter, has a problem with another clan and wants her to act as his betrothed. It’s a chance to smash a dry spell and help the man who has become a good friend. After all, what’s not to like about steamy sexual encounters?

But everything after that is downhill.

She’s slimed by a stinky plant, her brother arrives with bad news and dumps a huge, scary responsibility in her lap. Suddenly, her life is full of drama and nasty surprises.

Gryffnn has always lusted after Kaya, but she only saw his older brother. Now things have changed, and he has a plan to capture the sassy Kaya and woo her to his way of thinking. A move by an opposition clan forces him to escalate his romantic plan. Things proceed well until the past struts in to say hello and creates havoc with his love life and his dragon clan.

Never mind bed, Gryffnn and Kaya are too busy putting out dangerous fires and trying to stay alive to worry about the future…

The Indefatigable landed at the Narenda spaceport, the pilot powered down and silence fell, broken only by the squawks of a flock of scarlet birds, unsettled by the noisy arrival. Dragon shifter Gryffnn Drake’s chest rose and fell on a harsh exhalation. Tension slid through him, finding an outlet in clenched fists. 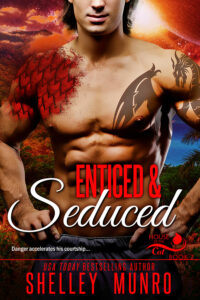 The doors slid open and the Indy crew appeared—leopard shifter Ryman Coppersmith, his mate Camryn O’Sullivan, the pilot Nanu, their medic Mogens and the luscious and unpredictable Kaya Ignatius.

A whisper-soft sigh released from Gryffnn once he confirmed Kaya was with the crew to fulfill their quarterly contract. Something about this woman called to him, to his dragon, yet she only had eyes for his older brother Ransom.

A sad fact but this time he had a strategy.

The crew spotted him, waved and strode down the ramp in his direction. Gryffnn averted his gaze from the woman who’d claimed his attention from their first meeting and nodded in greeting.

“Gryffnn.” Ry Coppersmith held one of his twins. “How is Ransom?”

“Is he showing signs of coming out of his coma?” Camryn held their other wriggling twin.

“He’s about the same.” A wave of anxiety and sadness struck Gryffnn. His older brother’s unexplained coma concerned him. While Gryffnn didn’t mind temporarily stepping into the chieftain’s shoes, he’d prefer it if Ransom regained consciousness, especially with this new complication. “He’s reached a plateau, neither improving nor declining any further.”

“Will Sable be all right minding the twins?” Camryn asked. “They’re a handful now they’re mobile.”

“Niran’s youngest daughter intends to help my sister,” Gryffnn said. “They’re both responsible and will take good care of your offspring.”

Gryffnn grinned, getting the general idea even though he didn’t understand the words. Camryn came from a distant planet, and sometimes her colorful language perplexed him. The Indy crew often borrowed words from her, meaning he had to concentrate. Ransom had also confessed to confusion at their word choices, which made Gryffnn less agitated with himself.

“Have you seen activity around the mine?” Nanu asked, the tendrils of his hair stirring and hissing.

Whoa! That was new. “We’ve tried to watch from afar,” Gryffnn said, eyeing Nanu’s hair. “But we’re wary of getting too close.”

“We’ll check out the area when we collect more precious stones for you,” Ry said. “What about those plants?”
Someone—probably pirates—had introduced a carnivorous plant to the planet. They’d thrived in Narenda’s tropical climate and created a new hazard for those who collected the raw materials he and the other dragons used to make their renowned jewelry.

“We’ve kept away from the mountain range,” Gryffnn said. “But rumor says the plant numbers aren’t increasing as they were. The salt spray you used to deter them has worked well.”

Without warning, a solution to his problem zipped into his mind. Gryffnn stilled, stunned by the audacious scheme, which was even better than his original idea. It might work…

The child Ry was holding shrieked, throwing up his arms.

The flight of dragons in the distance—all youngsters in training—wheeling through the sky, indicated the source of the child’s interest.

“Something wrong, Gryffnn?” Camryn set down her squirming daughter who scampered away to explore the colorful red flowers to their left.

“A complication,” Gryffnn said. “Let me collect your daughter, and we’ll walk to the compound.”

A short time later, the Indy crew sat with Gryffnn in Ransom’s office. Even though he spent many marks each cycle here, he still thought of it as his brother’s domain. Books lined two of the three walls while the large windows in a third wall overlooked the training field where the young dragon shifters practiced their flying and other battle skills. At present, two bright green dragons were practicing their flame-throwing. One opened its maw and flame flared outward, almost striking their instructor. Gryffnn stifled his burst of humor. They required better aim to progress in the ranks.

“As I mentioned, we have a complication,” Gryffnn said and glanced at Kaya. She cocked her head, interest flitting across her face. He caught a quick peek of one pointed blue ear before her straight blue hair settled back into place. Those pointed ears of hers intrigued him.

Nanu wrinkled his nose and his hair hissed.

His attention diverted, Gryffnn stared in fascination at the copper-colored dreads. “Why is your hair hissing at me?”

Nanu flashed a broad grin. “I have a mate. You remember Jazen?”

“Yes, the nurse. Your mating changed your hair?” Gryffnn asked.

“Yes,” Nanu said. “I’ll tell you the story later, once we hear about this problem of yours.”

Gryffnn heaved out a harsh sigh. “Fifteen rotations ago, I took one of the Gwilym dragon clan as my mate. The clan is based on Dalcon. It was a way to stop the war between our clans and introduce peace. Our pairing was not without problems. I left the Gwilym to return here and brought our son with me. We’ve kept a tenuous peace ever since with little contact between our two clans. Aideen Gwilym, the leader of the Dalcon clan, contacted me yes-cycle requesting a meeting.”

“Why is that a problem?” Camryn asked.

“We’ve tried to keep Ransom’s illness quiet, but I believe word is out, and she is visiting to discern the truth herself.”

“What happened to your mate?” Kaya asked. “Is she part of the visitor contingent?”

“That is the other problem.” Gryffnn’s voice hardened. “There was mention of an apology and a resumption of the relationship between our clans. I refuse to spend time with that she-devil.”

“What about your son?” Mogens asked. Streaks of black writhed across the medic’s cheeks as he studied Gryffnn.

“Another thorny problem,” Gryffnn said. “I don’t wish them to have contact with my son. My opinion—they’re testing us. Our strengths and weaknesses. They believe we are vulnerable. I fear we are on the brink of a war, and if our clan loses, Aideen and her tribe will force us to leave Narenda. This means Niran and his people are in danger too. With Ransom out of commission, Aideen considers us ripe for pillaging.”

Ry tapped his fingers on the wooden float-desk top. “Your men are well-trained. You’re doing an excellent job. Ransom couldn’t do any better. Perhaps they’ll visit and leave.”

“Aideen is not one for polite chitchat. We’ve had no communication and that thrilled me. The downside is we have no knowledge of their current situation. I heard a rumor about the limited supply of precious stones on Dalcon, but I have no idea if this is truth or fallacy.”

“You think they’re after your resources?” Ry asked.

Gryffnn yanked at his tunic collar and unfastened a toggle. “That is my suspicion. I’ve nothing to base it on, but my gut is jumping and bouncing like a dragon unused to flying.”

“Wait, what about this ex-mate of yours?” Camryn asked. “What happened after your split?”

“She mated with another dragon. I heard he died, but I haven’t determined the nature of his death.” Gryffnn scowled. “This is the first formal contact between our clans since I left Dalcon.”

“They can’t force you to mate with her,” Ry said.

Gryffnn eyed Kaya, trying to read the warrior woman. “No, but their desire for talks means they might prolong their stay for many cycles. I don’t want them here. Their visit won’t thrill Ransom either.”

“When are they coming?” Ry asked.

“I haven’t replied to the correspondence yet. I wanted to discuss the matter with you first.”

“Lad, you don’t require our input,” Mogens said, his violet gaze drilling into Gryffnn. “You are a capable leader. You have proved yourself already. Ransom is proud of you. I am certain of this.”

“I have an idea I wanted to run past you before I reply to Aideen.” Gryffnn hesitated before turning to Kaya. No, this was a good idea. A sound one, and if it meant he got to spend time with the beautiful Kaya, it couldn’t be wrong. This was his opportunity to woo and win the courageous woman. “Actually, Kaya, my plan involves you. I wondered if you would be amenable to act as my betrothed, my intended mate.”

Kaya’s blue, blue eyes widened. A spurt of amusement filled him on seeing her unattractive gape.

“Me?” Her brow wrinkled and she pressed her palm to her chest.

Gryffnn tried not to stare at her plump breasts, diverting his gaze to her eyes. “If I already have a mate, Aideen can’t use betrothal talks as an excuse to prolong their visit.”

“I guess I could pretend to be your mate,” Kaya said.

“No.” Gryffnn watched her closely. “Forgive me, but I need to be blunt. We’ll need to have sex so you take on my scent.”

“This term is new, but yes. That sums up my needs.”

“Yes.” Gryffnn was having difficulty reading the woman. Was that intrigue he saw in her expression? He wasn’t certain.

“I can’t get enough of this series. I have been waiting for the dragons to get their own stories and Enticed & Seduced went above and beyond my imagination. I can’t wait to read the next book in this series which features the hunky Ransom!”
~ Stormy Vixen’s Book Reviews